A win on plastic bags for environmentalists; not so on bottles, plastic straws 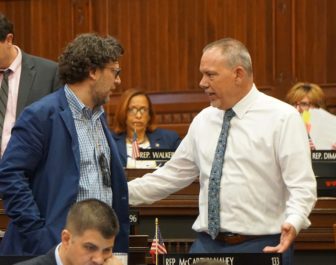 Customers who fail to grab their reusable shopping bags before heading to the store have two more years to perfect new habits before plastic bags are banned in Connecticut, but in the meantime they will pay a 10-cent tax on every plastic bag they take home.

The tax – and the eventual ban on single-use plastic bags – were approved as part an amendment to the state budget bill passed Monday night in the House of Representatives and approved Tuesday by the Senate. If signed into law by Gov. Ned Lamont, the tax would go into effect Aug. 1, while the ban would begin July 1, 2021.

Environmentalists consider the legislation a victory because it revises language in the budget that would have exempted plastic compostable bags from the tax and would have blocked towns from enacting ordinances requiring a charge on paper bags.

Lori Brown, executive director of the Connecticut League of Conservation Voters, said her organization brought a lot of pressure to bear on house members and on the governor’s office.

“We really needed to give some kudos to the House,” said Brown, noting that it’s a rarity to get a budget bill amended on the floor. “This was a really bloody battle.”

Brown said it makes sense not to exempt so-called compostable plastic bags from the ban because those bags don’t biodegrade on their own and must be put through a special process.

She is also pleased that the bill now leaves towns free to enact their own ordinances concerning single-use checkout bags as long as the local regulations are equally or more restrictive than the state provisions. This means, she said, a town can pass an ordinance requiring a charge on paper bags if desired.

“We wanted to honor their efforts to make sure that whatever we did legislatively at the state level would not preempt those efforts or future efforts by municipalities to create regulations that might actually be stronger than the state’s,” he said. “So that was very important that we clarified that.”

On compostable bags, Steinberg said, “It’s a broader subject that we felt needed further exploration. I believe we’ll be looking at doing a study and we’ll contemplate biodegradable bags and compostable bags more broadly in the broader context of waste management and what’s best for Connecticut, hopefully in the coming year.”

“We really needed to give some kudos to the House. This was a really bloody battle.”

Although the plastic bag ban was hailed by environmentalists, concerns still exist.

For one, by not also banning paper bags, the state could leave itself open to a loophole. Namely, that if paper bags are still available, people will simply switch from plastic to paper bags, which come with their own set of problems. One is that the carbon footprint from their manufacture and transport is actually greater than that of plastic bags.

Paper bags are also more expensive than plastic – as much as 10 times as expensive. That’s why in other places in the U.S., at least part of the fee on plastic bags has gone back to retailers to help compensate them for paper bag costs.

The legislation doesn’t require a charge on paper bags — which is what Wayne Pesce, executive director of Connecticut Food Association, wanted. It doesn’t prevent stores from charging for paper bags either.

Another concern is a lack of consistency. Part of the goal of a statewide mandate was to prevent grocery and other retail chains from facing different regulations from municipality to municipality. By allowing municipalities to still implement their own, potentially stronger, ordinances, the provision in the budget may do less than anticipated to solve that problem.

Pesce, while disappointed with some aspects of the legislation, is still supportive of the state’s efforts.

“It’s a good bill directionally. It’s the right way to go,” he said. “It was just how we got to it.”

Other environmental measures aimed at reducing the waste stream have not been as successful this legislative session.

On Saturday, the House passed a strike-all amendment that derailed efforts to update bottle redemption legislation in House Bill 7294. The bill would have expanded the types of redeemable bottles to include most teas, juices and sports drinks. It also would have increased the beverage container deposit to 10 cents, up from five cents.

Instead, the House approved an amendment that establishes a task force to study the existing law, assess its efficacy and report back by Dec. 31, 2019.

“We needed the bottle bill fixed and they killed it,” Brown lamented. “We were just absolutely beside ourselves.”

Lou Rosado Burch, Connecticut program director for the Citizens Campaign for the Environment, said he is “very disappointed at the legislature’s failure” to address the bottle issue.

“It’s a betrayal of the public interest,” he said.

Rep. Joseph Gresko, D-Stratford and vice-chairman of the legislature’s environment committee, defended the task force, however.

“There have been task forces done before but not everyone was in the room and the other task forces didn’t have the weight of the Speaker’s office behind them,” he said.

“We’ll meet during the course of the rest of this year and then hopefully come back with a recommendation on how to modernize the bottle bill going forward and if that means a series of bills over the course of the next few years then so be it,” Gresko said. “I don’t think that there’s a magic wand out there that’s going to fix all the concerns from everyone all at the same time.”

Meanwhile, a bill that banned single-use plastic straws — House Bill 5385— was the subject of such lengthy debate last week in the House that it was put on hold temporarily.

“It fell into the filibuster abyss,” Brown said. She said it’s unclear whether it will die there or eventually be resurrected.

Two other waste-stream bills — reducing the use of styrofoam — have been passed by a single chamber.