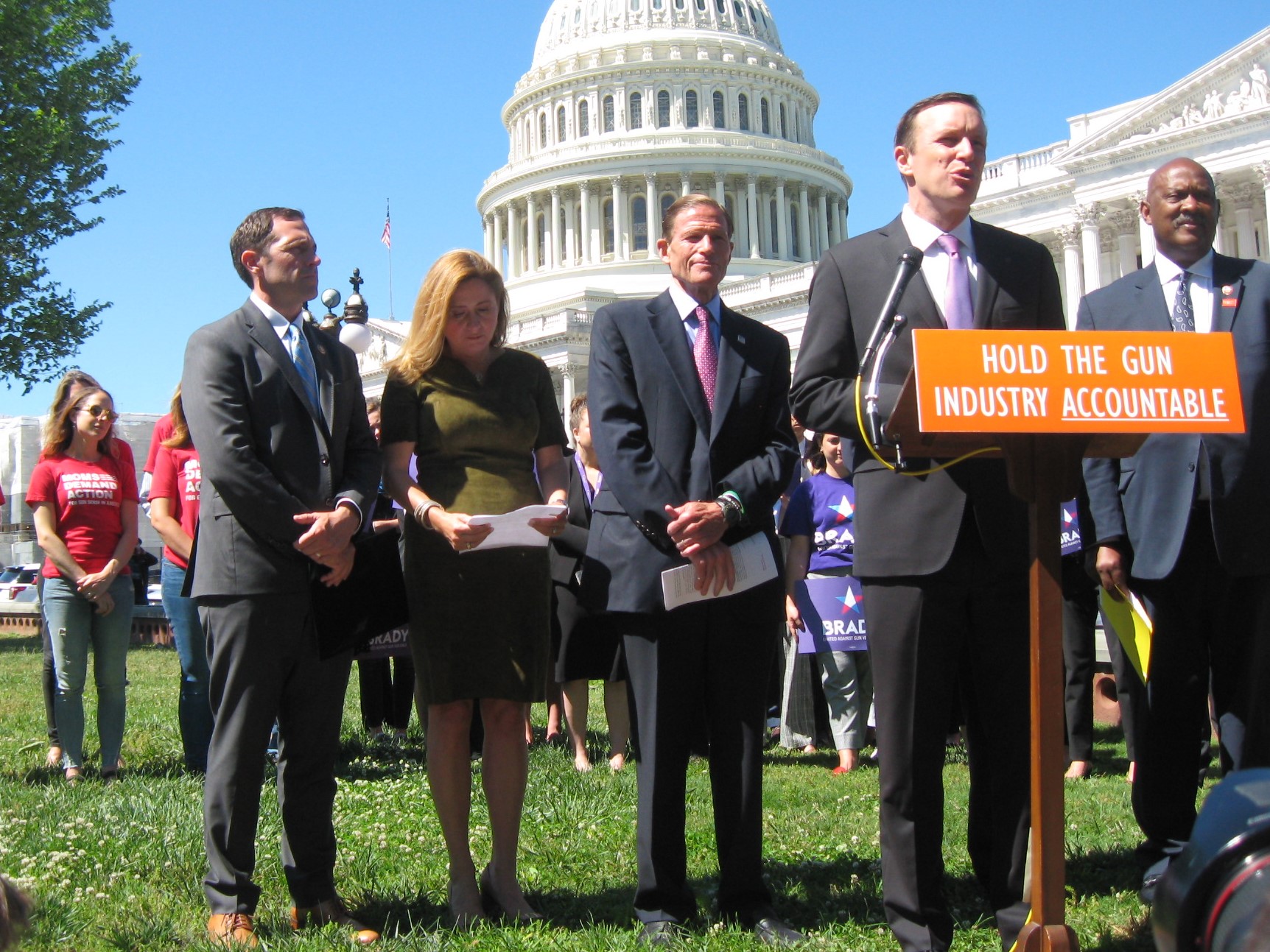 Washington – After Lonnie and Sandy Phillips lost their 24-year-old daughter, Jessi, in a 2012 mass shooting in a movie theater in Aurora, Co., the couple tried to sue the online retailer who sold their daughter’s killer 4,000 rounds of armor-piercing ammunition without a background check.

But because a federal law gives gun retailers and gun manufacturers unique legal protections, the Phillips’ lawsuit was dismissed. The couple not only had to pay their own legal fees, but a judge ordered them to pay the retailer, Lucky Gunner, $200,000 to cover its legal expenses.

Sens. Richard Blumenthal and Chris Murphy have been trying for years to level that legal playing field to help people like the Phillips and other victims of gun violence seeking to sue the gun industry, including a group of Sandy Hook families.

On Tuesday, the senators introduced a bill for the fourth time that would repeal the gun industry’s legal protections.

Those protections were obtained in 2005 with Congress’ approval of the Protection of Lawful Commerce in Arms Act, or PLCAA, which shields firearms manufacturers and dealers from being held liable when crimes have been committed with their products. A similar bill was introduced by Rep. Adam Schiff, D-Calif., for the third time, in the U.S. House.

The Democratic lawmakers hope their bill, called the “Equal Access to Justice for Victims of Gun Violence Act,”will bolster wrongful death lawsuits filed by the families of nine victims of the Sandy Hook Elementary School shooting against Remington Arms, the manufacturer of the rifle used in the massacre.

“All we are doing is giving victims of gun violence their day in court,” Blumenthal said.

As a former trial lawyer, Blumenthal said the “sweeping immunity” the gun industry has from lawsuits “is an abomination.”

Murphy said the gun industry has the ability use technology to make guns safer.

“But as long as the industry has no financial reason – because it can’t be sued – that technology won’t see the light of day,” Murphy said.

“Suing a gun manufacturer for the illegal use of their product is like suing Ford when a drunk driver runs over a pedestrian,” the NRA said in a past statement on the issue.

Gun manufacturers face the same product liability that all companies face if their products are defective in some way,” said CCDL President Scott Wilson.” However, unending frivolous lawsuits for product misuse would simply bankrupt firearms companies. No one would be able to exercise their 2nd Amendment rights if lawmakers have their way with this bill. That fact should concern all Americans.”

The Connecticut Supreme Court in March ruled 4-3 that Connecticut law “does not permit advertisements that promote or encourage violent, criminal behavior.” And while federal law does offer protection for gun manufacturers, the state Supreme Court determined “Congress did not intend to immunize firearms suppliers who engage in truly unethical and irresponsible marketing practices promoting criminal conduct…,” remanding the case back to the trial court.

Remington has appealed that unfavorable ruling to the U.S. Supreme Court.

Josh Koskoff, an attorney who represents the Sandy Hook families, said the case against Remington is based “on exceptions in PLCAA that Congress purposefully included, so repeal would not have any bearing on our case”

“That said, the families fully support the repeal of PLCAA,” he said. “There is no industry less deserving of special protection by Congress than the firearms industry. Because of PLCAA, gun manufacturers believe they are above the law and have acted accordingly without regard for public safety.”

Chaos at the NRA

Still, Blumenthal said the repeal of PLCAA “would be a powerful boost,” for those who seek to sue the gun industry, like the Sandy Hook families.

“This measure is still a barrier to them,” he said.

At a press conference on Tuesday outside the U.S. Capitol with Schiff and Reps. Jason Crow, D-Co., Dwight Evans, D-Pa., and Debbie Mucarsel-Powell, D-Fla., Blumenthal and Murphy said times have changed since Congress approved PLCAA in 2005 and the National Rifle Association no longer has the same stranglehold on lawmakers.

There may be some truth to that. The NRA is beset by a widening corruption scandal, with the Washington Post reporting that NRA board members benefited from lucrative sweetheart deals.

Upheaval  at the NRA, including the ouster of Oliver North as the organization’s president, prompted its longtime advertising and public relations firm, Ackerman McQueen, to end its relationship with the gun group after 38 years because “the NRA’s chaos led us to lose faith.”

While a PLCAA repeal stands a chance of approval by in the U.S. House, which is controlled by Democrats, the GOP-led Senate is not likely to take up a PLCAA repeal – or any legislation that tightens federal regulations of guns.

The Democratic lawmakers said it might take time, and pressure from constituents, to get the Equal Access to Justice for Victims of Gun Violence Act approved in the Senate.

“But we will get a repeal of PLCAA,” Murphy predicted. 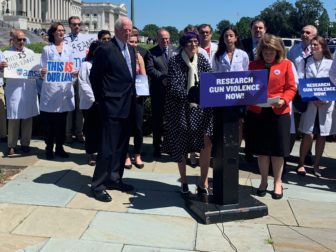 This week, the U.S. House will vote on the Labor, Health and Human Services, and Education appropriations bill, which would, for the first time in 20 years, include funding to support firearm injury and mortality prevention research at the National Institute of Health and the Centers for Disease Control and Prevention.

DeLauro, the chairwoman of the House Labor, HHS and Education Appropriation subcommittee, included $50 million for gun violence research in the bill that would fund those agencies next year.

“The epidemic of gun violence is a public health emergency and it demands public health research,” DeLauro said .”For more than two decades, Congress has failed to fund critical gun violence prevention research. We are going to change that this year.”