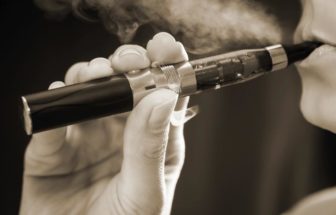 Starting in October, smokers must be 21 to purchase vaping or tobacco products.

Starting in October, Connecticut residents must be 21 to purchase tobacco or vaping products.

Gov. Ned Lamont signed a bill Tuesday raising the legal age to buy cigarettes, cigars, vaping pens and other tobacco paraphernalia from 18 to 21.

This fall, the state Department of Mental Health and Addiction Services will be responsible for conducting unannounced compliance checks on e-cigarette dealers and referring violators to the Department of Revenue Services, which could impose penalties.

The bill increases, from $50 to $200, the annual license fee for cigarette dealers. It also boosts the penalty for each day a cigarette dealer or distributor operates without a license to $50, up from $5.

Lamont and lawmakers also included in the state budget a 40 percent-per-milliliter tax on electronic cigarette liquid that is pre-filled and manufacturer sealed, and a 10 percent tax on the wholesale price of all other vaping products.

The Tobacco 21 bill won passage in the House in mid-May and cleared the Senate two weeks later.

“Protecting our youth from tobacco addiction should be a bipartisan issue, and here in Connecticut, our legislators set an important example,” said Ruth Canovi, advocacy director for the American Lung Association in Connecticut. “Raising the age of sale simply reduces the consumption, availability and visibility of these products to our young people – and sends a clear message to parents and guardians that all tobacco products, including e-cigarettes, are dangerous.”

This year, the State Board of Education released a report showing a six-fold increase in the number of suspensions and expulsions related to vaping over the prior year. The number of Connecticut high school students who used vaping products doubled from 2015 to 2017, according to a study released by the state Department of Public Health last fall. Overall, 14.7 percent of high school students reported “currently” vaping in 2017, compared to 7.2 percent in 2015.

Connecticut joins 15 other states and hundreds of cities and towns that have passed similar legislation, including California, Maryland, Washington, Hawaii and most recently, New York. The state law also mirrors efforts in several Connecticut communities that have passed local ordinances boosting the age to purchase Tobacco products, including Hartford, Bridgeport, Meriden and Milford.

Time’s Up signed, too 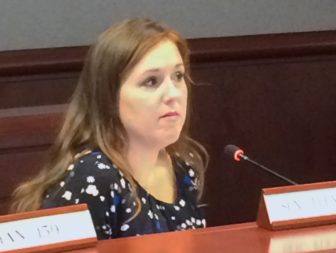 Sen. Mae Flexer, D-Killingly, was a key proponent of the Time’s Up bill.

The legislation, known as the “Time’s Up” bill, requires workplace training to combat sexual harassment and eliminates the statute of limitations for sexual assaults against minors and expands it in cases involving adults.

The bill is prospective, meaning it does not subject anyone to prosecution in older cases where the statute of limitations applied. But it greatly expands the time under which victims of assault can pursue damages in civil court or justice in criminal court.

Connecticut has varied statutes of limitations for sexual assault, depending on the age of the victim, the nature of the crime and the availability of DNA evidence. Misdemeanor assaults generally have a one-year limit, while felony cases sometimes have no limits.

The new law extends from five to 20 years the default statute of limitations for Class B, C and D felony sexual assaults in which the victim is age 21 or older. The limit for unwanted sexual contact or other Class A misdemeanors increases from one to 10 years.

If the victim is 18, 19, or 20, the statute of limitations is 30 years following the victim’s 21st birthday. There is no limit under current law for younger victims.

Under the new law, employers would have to present two hours of training to their workers about sexual harassment. Failure to do so could expose the employer to civil prosecution by the Commission on Human Rights and Opportunities.