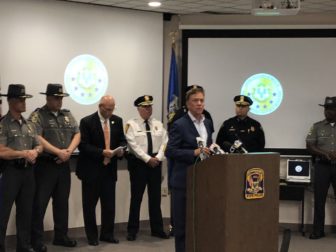 Middletown — Flanked by about a dozen uniformed police officers from state and city law enforcement, Gov. Ned Lamont on Tuesday outlined his administration’s plan to address an uptick in shootings in New Haven, Hartford and Bridgeport.

Tapping into its Justice Assistance Grant program, the state will give $25,000 to each of the three cities to help cover the short-term costs of adding police patrols above current staffing levels. Each municipality will also be loaned state police personnel who will work on violence reduction initiatives and go on patrol with local officers.

Each of the cities will receive help from the state police in a way that meets their specific needs, officials said. In Bridgeport, for example,  state troopers will help local officers patrol specific areas of the city, while in Hartford and New Haven state police detectives will be assigned to assist with violence reduction efforts.

“We’re never going to have great cities unless we have great, safe cities where families know that they can be safe,” Lamont said Tuesday afternoon. “And what we’ve done here is preventative. We’re paying attention, we’re ahead of the curve right now. We’re doing everything we can to keep your community safe.”

Lamont was joined Tuesday by Department of Emergency Services and Public Protection Commissioner James C. Rovella, who is Hartford’s former police chief. Rovella said the purpose of redirecting more officers to New Haven, Hartford and Bridgeport is not to arrest people en masse, but to prevent violence and make Connecticut’s cities safer.

But, he added, that doesn’t mean officers will shy away from holding accountable those responsible for the violence.

“Let’s be realistic here. Some people are going to jail, no doubt about it,” Rovella said. “We’re going to slow down this violence. It is a public health epidemic, the shooting of our young people in these cities.”

Shootings tend to spike nationwide in summer months, when young people — who are more likely to be both the victims and perpetrators of gun violence — spend more time outside, especially in under-resourced communities with high levels of youth unemployment and a dearth of summertime programs.

There have been 15 homicides in Hartford since the beginning of the year. Earlier this month, there were three shootings in a 24-hour period.

State and local officials have mobilized to respond to the shootings. On Monday, state and city leaders met to discuss how to address the uptick in gun violence. A few hours before Lamont’s news conference, Attorney General William Tong joined 18 state attorneys general to defend California’s ban on large capacity magazines that hold more than 10 rounds of ammunition.

Rovella said the state’s strategy for addressing the shootings does not currently include adding more mental health resources to these communities. “This is stopping and slowing down the violence that’s occurring right now,” he said, underscoring that such concerns are part of a broader, more intersectional response. “That’s for a greater conversation.”

Several speakers mentioned Project Longevity, a collaborative initiative that aims to reduce violence in Bridgeport, Hartford and New Haven by strengthening relationships between police and community members and offering social services to those at greatest risk of experiencing acts of violence.

“Violence is about education. Violence is about socioeconomic issues. There are a lot of underlying issues, mental health issues,” said New Haven Chief of Police Otoniel Reyes. “Law enforcement needs to be at the table, but this needs to be a holistic approach, because at the end of the day this derives from issues related to socioeconomic status.”

Reflecting on his nearly 40 years of law enforcement experience, Rovella said the number of shootings in 2019 pale in comparison to those in previous decades.

“I remember the ’80s and the ’90s, and shootings were out of control,” Rovella recalled. Two of the three cities have seen a decrease in the number of serious crimes, which includes rape, robbery and murder.

“When you look at the shootings, they’re starting to creep [up],” Rovella said. “That’s why we want to put our foot in the door, and make something happen, which means slow it down.”

Shortly before the news conference ended, Lamont mentioned having lunch recently with someone from Hartford’s North End. The gentleman, whom Lamont estimated was in his 60s, told the governor he has grandchildren he wants to see grow up in a community safer than the one in which he was raised.

“We’ve got the best people in the world, I’m standing with them right now, making sure we don’t go back to those days,” said Lamont.