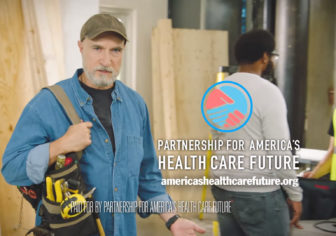 Health insurers are part of a coalition fighting Medicaid-for-all and other Democratic proposals to change the nation’s health care system.

Washington – Nearly every Democratic candidate for the White House, from the most progressive to the most conservative, are calling for changes to the nation’s health care system that would adversely impact Connecticut’s health insurers – and that industry is hitting back.

Joining forces with their longtime foe, the pharmaceutical industry, and with some of the biggest names in the health care industry, including the American Medical Association and the Federation of American Hospitals, the nation’s health insurers have joined a coalition that is fighting Medicare-for-all  proposals and other Democratic plans to alter the nation’s health care.

The Partnership for America’s Health Care Future, funded by the insurance industry and its allies, is running digital and television ads aimed at undermining support for Medicare-for-all proposals and plans for a “public option,” a government-run health plan that would compete with private insurance plans.

The partnership was formed a little more than a year ago to protect the nation’s current health care programs, mainly the Affordable Care Act, Medicare and Medicaid.

The organization’s executive director, Lauren Crawford Shaver, said diverse groups in the coalition found a common cause in 2017 — opposing an attempt by congressional Republicans to repeal the Affordable Care Act.

“We came together to protect the law of the land,” she said.

That battle was won. Coalition members determined they should continue to band together to ward off other political dangers.

“There’s a lot of things we might fight about, but there’s a lot we can agree on,” Crawford Shaver said. 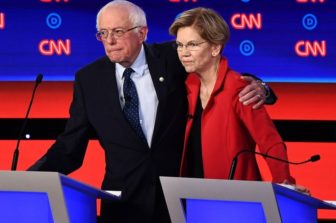 Sens. Bernie Sanders of Vermont and Elizabeth Warren of Massachusetts called for the United States to achieve Medicare-for-all through a single-payer system, in which all Americans would be enrolled automatically in a government plan.

Warren was among several candidates at the debate who took aim at health insurers.

“These insurance companies do not have a God-given right to make $23 billion in profits and suck it out of our health care system,” she said.

Others on the debate stage last week prefer a more modest approach, offering a “public option” or Medicare buy-in plan that would allow Americans to purchase government-run coverage, but unlike Medicare-for-all would not eliminate the role of private insurers.

The nation’s health insurers oppose all of the Democratic proposals discussed during the two nights of debates.

The insurers’ message is simple: The Affordable Care Act is working reasonably well and should be improved, not repealed by Republicans or replaced by Democrats with a big new public program. Further, they say, more than 155 million Americans have employer-sponsored health coverage and should be allowed to keep it.

Insurers also say that public option and Medicare buy-in plans would lead the nation down the path of a one-size-fits-all health care system run by bureaucrats in Washington D.C.

They say offering a public option or a Medicare buy-in would prompt employers to drop coverage for their workers and starve hospitals, especially those in rural areas, since government-run health plans usually reimburse doctors and hospitals less for medical services than private insurers.  They also say Medicare-for-all and other Democratic proposals will lead to huge tax increases to pay for the plans.

“Whether it’s called Medicare for all, Medicare buy-in or the public option, the results will be the same: Americans will be forced to pay more and wait longer for worse care,” said Crawford Shaver.

The Partnership for America’s Health Care Future ran its first television ad on CNN just before and after the cable channel ran last week’s debates.

“We need to fix what’s broken, not start over,” the final speaker says.

Members of the Partnership for America’s Health Care Future have a lot of money and influence to wield on Capitol Hill. They spent a combined $143 million lobbying in 2018 alone, according to data from the Center for Responsive Politics.

And coalition members appear eager to spend even more lobbying money this year.

In the first six months of this year, America’s Health Insurance Plan, a health insurer industry group and member of the partnership, spent more than $5 million on lobbying expenses, and is on the way to surpassing the $6.7 million it spent in lobbying last year.

In Connecticut, the industry employs 12,296 workers directly and generates another 13,586 jobs indirectly, AHIP says. The payroll for both these groups of workers totals over $3.8 billion a year, AHIP says, and the average annual salary in the business is $112,770. The Connecticut Association of Health Plans puts the number higher, saying Connecticut has 25,000 direct jobs related to the health insurance industry, and another 24,000 indirect jobs.

Connecticut’s reliance on health insurers – and their continuing influence – was on full display during the last legislative session when the insurance companies, led by Bloomfield-based Cigna, derailed efforts to pass public option legislation in 2019.

Besides trying to derail any chance of Medicare-for-all becoming law, the partnership is also lobbying to expand Medicaid under the Affordable Care Act in Texas, Florida and other states that have yet to do so, and expand federal ACA subsidies so more people can purchase private insurance.

But with the future of the ACA in the hands of a federal appellate court that could invalidate the health care law and polls showing that health care is a prime concern for voters, Democrats — even those who represent Hartford, the “Insurance Capital of the World” — are embracing bigger changes, perhaps pushed by public sentiment.

A recent Kaiser Family Foundation tracking poll showed two-thirds of those polled, including 85% of Democrats and 68% of independents, say they support a public option.

Most Republicans polled, 62%, said they oppose a public option.

But the poll found that a majority of Democrats, 72%, and independents, 55%,  still favor such a plan.

Mollyanne Brodie, executive director of the Kaiser Family Foundation polls , said the dips in support for Medicare-for-all could be attributed to greater public understanding of the plan.

Brodie said that initially many Americans thought Medicare-for-all simply meant “everyone would get insurance,” without much knowledge of how the plan would work.

“But now there’s an awful lot of attention on it and a lot of that attention is focused on what Medicare-for-all really means and its impact on the role of private insurers,” Brodie said.