In national politics last week there was talk of little else than gun violence, white nationalism and gun control following the fatal shootings of 31 people in Dayton, Ohio and El Paso, Texas.

There was little more than talk, too.

Toward the end of the week, under enormous pressure from local mayors, Democrats and the public at large, President Donald Trump and Senate Majority Leader Mitch McConnell expressed some willingness to entertain a debate on universal background checks for gun purchasers and other possible legislation.

Connecticut Sen. Richard Blumenthal is a big proponent of so-called “red flag” laws that are gaining some bipartisan support following the recent massacres. A reinstatement of the assault weapons ban is another idea that seemed to be gaining some new traction, but not in Congress and not in the way Connecticut House Majority Leader Matt Ritter, D-Hartford, briefly had in mind.

The subject of gun violence has been greatly concerning to U.S. Sen. Chris Murphy since the horrible day in 2012 when a gunman shot and killed a total of 26 first graders and their teachers in Newtown. It was the inspiration for “The Violence Inside Us,” a book he is writing on the subject. 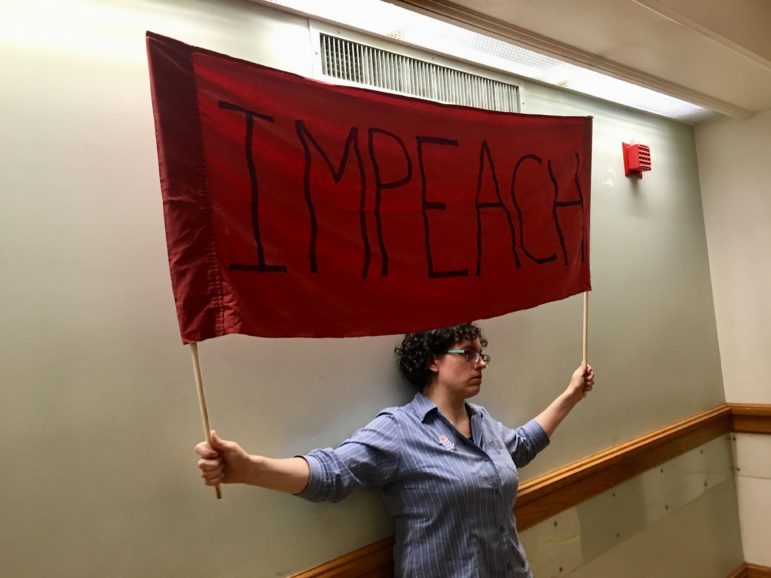 Cecilia Caride, of Windsor, said her message to Rep. John Larson was clear.

Even before Trump’s fraught and uncomfortable visits to console Dayton and El Paso, a lot of West Hartford voters were frustrated and angry that U.S. Rep. John Larson, D-1st District, has not supported the idea of pursuing impeachment hearings for the president — and they told him so.   Neither are some state folks happy about the president’s rollback of protections for transgender people.

Equally emotional, perhaps, has been the subject of vaccinations for public school students and whether some should be exempt from them for religious reasons. Health officials last week said they would advocate for the removal of all non-medical exemptions. Five Republican lawmakers, meanwhile, are urging the state’s new director of public health to stay out of the issue.

Vaccinated or not, about a third of the state’s high school juniors — many of them black or Hispanic — are not ready for college or a career, the latest test results show.

In its efforts to improve the educations of state students, the nonprofit Partnership for Connecticut  may have to be more transparent that state officials originally planned, State Attorney General William Tong says. It is not clear what if anything should be done about the state’s $100 million contribution to the partnership — made outside the budget’s spending cap. (The good news is that the state has managed to not spend down its budget reserves, that are at a record high.)

The state has been less successful in its efforts to resolve the casino gambling controversy surrounding the Mashantucket and Mohegan tribal nations’ proposed casino in East Windsor.  The tribes rejected Gov. Ned Lamont’s proposal they drop that plan in favor of another location, and MGM Resorts International filed a suit with a similar objective.