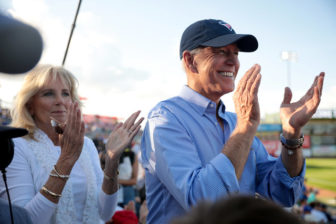 Jill Biden will visit Connecticut next month to raise money for her husband’s campaign for the White House.

Former Vice President Joe Biden’s campaign did not offer any more details of the visit, except to say Jill Biden will visit Connecticut on Sept. 20 and Sept. 21 and also go to New York that weekend.

The campaign said Jill Biden’s visit to Connecticut would not involve any public events – just fundraising.

It’s likely that most, and probably all, the money Jill Biden raises in Connecticut that weekend will be spent in other states, especially the early primary states of New Hampshire, Iowa and South Carolina. Or it may be spent in other states that will help determine which Democrat is their party’s choice to run against President Donald Trump.

And while Connecticut Democrats will have a chance to donate to the Biden campaign, they may not get a chance to cast a vote for him in the state’s  presidential primary. That’s because the state’s primary is scheduled for April 28, 2020, after most of the nation has had a chance to select their favored Democratic presidential candidate.

Biden, considered the current front-runner, would have to survive all of those other challenges and still be a viable candidate when Connecticut’s primary rolls around.

The field of Democrats running to unseat Trump, still more than 20, shrank by one on Thursday, however, as former Colorado Gov. John Hickenlooper ended his bid.