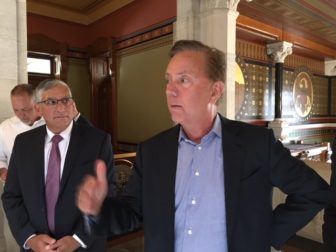 Gov. Ned Lamont and legislative leaders said after a closed-door meeting Wednesday that mismanagement and contracting irregularities at the Connecticut Port Authority demonstrate a need for greater oversight of quasi-public agencies, not their abandonment.

“We got this group together to think about our quasi-publics,” Lamont said. “I think most of them are running very well, but some of them we’ve had some real issues with, starting with the Port Authority and the Lottery.”

The Connecticut Lottery Corporation is one of several quasi-publics whose severance packages to departing employees have been flagged by state auditors, and Lamont recently ordered a review of the relatively new port authority.

All of the state’s 15 quasi-publics are subject to state audits, and their operations fall under the state ethics code and freedom of information act. But they have more freedom than state agencies in personnel, purchasing and contracting decisions.

Governance of the quasi-publics is periodically questioned by auditors and outside groups, especially over severance issues. Access Health CT, the state’s health exchange, paid out $678,954 in severance without review by the board of directors in 2014 and 2015, according to a May 2019 audit.

Senate President Pro Tem Martin M. Looney, D-New Haven, said the lawmakers and Lamont also discussed the payment of bonuses by some quasi-publics, arguing that the agencies must have consistent policies and full transparency on bonuses. Treasurer Shawn Wooden, who sits on the board of some quasi-publics, attended the meeting.

Lamont said the state’s Office of Policy and Management, which prepares the state budget, most likely would be asked to review the quasi-public’s finances and ensure that the agency budgets and other data are available on line.

The concerns raised Wednesday expose the tensions inherent in the expectations of quasi-publics vs. standard state agencies. Quasi-publics are meant to be more nimble and business-like, yet transparent and accountable.

“These standards are proposed in the form of recommendations aimed at clarifying the basic nature of quasi-public agencies and ensuring accountability to the state without jeopardizing the freedoms with which they were intentionally created,” the committee wrote.

The legislators said Wednesday they see no fundamental problems with quasi-publics that cannot be addressed by better oversight.

Eight years ago, when the legislature created the Connecticut Airport Authority to run and market Bradley International at the request of Gov. Dannel P. Malloy, Klarides complained in written public-hearing testimony that the authority would not be sufficiently independent, since its workers still would be state employees.

“There is no need for the Governor or the State of Connecticut to be in the business of running airports or ferry services; we should be trying to shrink the government’s role not increase it,” Klarides wrote.

The airport authority manages Bradley and five general-aviation airports: Brainard in Hartford, Danielson, Groton-New London, Waterbury-Oxford and Windham. It is financed by revenues such as landing and parking fees, terminal rents, rental-car fees, concessions, issuance of bonds, state and federal grants, and other fees.

Until 2011, Bradley and the other state-owned airports fell under the control of the Department of Transportation, as was the case with the deepwater ports of New London, New Haven and Bridgeport before the creation of the port authority through legislation passed in 2014 and 2015.

Lamont said the port authority is the best way for Connecticut to make the ports an integral element of the state economy, despite a recent audit that found its board had failed to establish more than minimal financial controls in its initial operations.

“I think the legislature in their wisdom said, ‘Our ports are festering, not much has happened there over the last 50 years.’ They came up with a new vehicle, the port authority,” Lamont said. “I think you’ve seen the  New London port has the best potential to be transformed in many, many a year.”

The State Pier at New London is slated to become the staging area for off-shore wind power in the Atlantic.

The legislature’s Transportation Committee conducted an all-day hearing last month into the operations of the troubled new authority: Its executive director, Evan Mathews, is on leave, and two recent board chairs, Scott Bates and Bonnie Reemsnyder, have resigned in quick succession following a critical audit and press accounts of questionable contracting and hiring practices

Lawmakers have questioned the circumstances surrounding the $3,000 purchase of sound-insulating panels decorated with photographs by Reemsnyder’s daughter for the authority’s new offices in Old Saybrook, while auditors found that the authority had operated its first two years without the most basic of financial controls or personnel rules.

Republican lawmakers have asked that Bates, whose board service was part-time and unpaid, be suspended from his full-time job as the deputy secretary of the state. Republican leaders did not press that request at the meeting Wednesday.