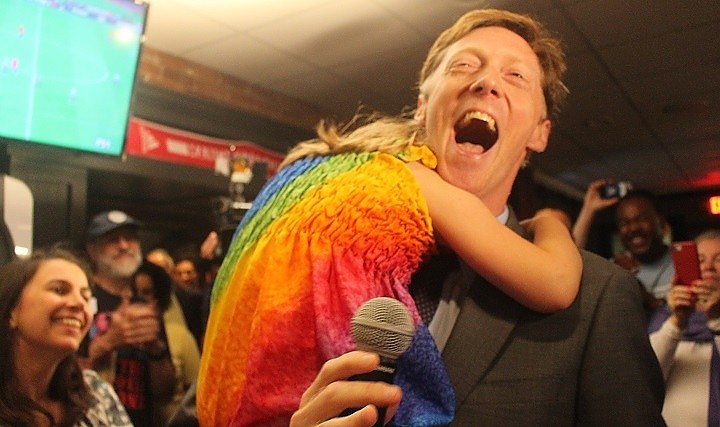 In all, there were 25 primaries in 23 communities, but the state’s marquee race was Harp vs. Elicker, a rematch of the 2013 contest when the seat was open and Elicker a political newbie.

According to ward-by-ward results gathered by the New Haven Independent, Elicker won with 58.5 percent of the vote. Unofficial results on the secretary of the state’s web site showed Elicker winning,  7,198 to 5,150.

Harp conceded an hour after the polls closed.

Elicker, 44, a former city alder who promised a generational change and new openness at the city hall, ran a strong and steady campaign against a 72-year-old incumbent who seemed rocked by the defections of long-time supporters over a long and joyless summer.

“People want the establishment politicians that have been in office for decades to step aside and make space for leadership that brings new ideas and new energy,” Elicker said, standing outside the Ward 20 polling place in Newhallville during the post-workday rush.

“People want the establishment politicians that have been in office for decades to step aside and make space for leadership that brings new ideas and new energy.”

Nearby, 31-year-old Jayuan Carter handed out literature for Elicker. In 2013, he was a ward leader for Harp, but he said Harp ran a city hall that seemed closed to all but a few.

“People are frustrated with political leaders that give jobs to their friends, give contracts to people they have relationships with or donate to their campaigns. People are tired of this soft corruption that is endemic to the national political culture,” Elicker said. 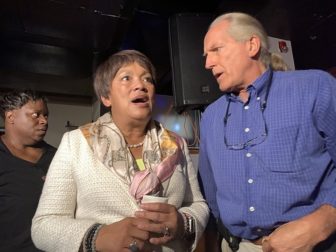 Mayor Toni Harp with spokesperson Laurence Grotheer at 50 Fitch, where she conceded the primary to Justin Elicker.

Harp, a long-time lawmaker before winning an open race in 2013 after the retirement of John DeStefano Jr.,  acknowledged it had been a difficult campaign season, politically and personally.

“You learn who your real friends are and your sometimes friends are,” Harp said.

In arguing that New Haven’s residents were not all sharing in the city’s resurgence, Elicker succeeded where Perez failed in Hartford. Perez, attempting a comeback after a corruption conviction forced his resignation in 2010 had run a populist campaign, accusing Bronin of focusing on downtown to the exclusion of the city’s schools.

“Right now I think people don’t feel there is a plan for their neighborhood, and if there is a plan, they’re not part of it,” Perez said before the polls closed. “They don’t feel connected to whatever the overall strategy is for the city.”

Bronin’s victory comes after a bid for governor last year that even some friends viewed as premature, coming less than three years after his election as mayor — and his promise to serve a full four-year term. If Gov. Ned Lamont does not seek a second term, Bronin is expected to take another look at statewide office.

“Four years ago we stood in this very same room, and as we celebrated that night, I said we have lots of hard work and hard decisions ahead, and that change will take time and it will not be easy,” Bronin said at the Polish National Home in Hartford. “And the challenges we’ve had to face over the last three and a half years were bigger than any of us could have imagined that night. But we faced those challenges head on.” 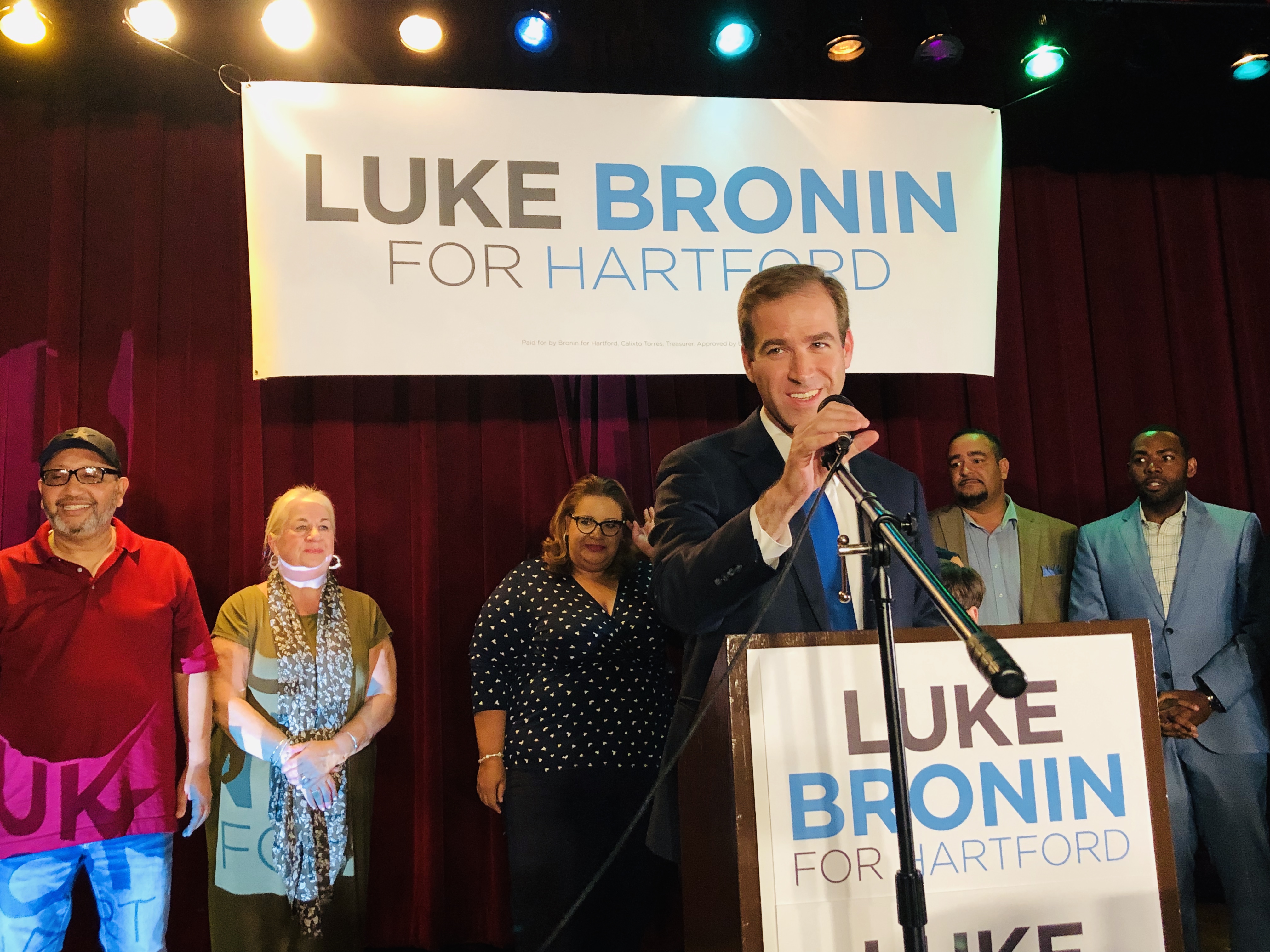 Bronin’s administration was greatly helped by a state bailout, even if it effectively ended his explorations for governor.

“In his first term he very successfully leveraged and negotiated on behalf of the city to have the state assist in us having a real future,” said John Kennelly, a former councilman. “What he has to do in a second term is prove that that faith by the legislature and the governor’s office was well founded and that he can build upon it.”

In New Haven, Harp acknowledged earlier in the day that her fourth run was her hardest. As she stood outside a polling place in Fair Haven, voters complained about police response. She took notes and said, “Well, I’ll look into it.”

Elicker’s victory delivers on the potential evident in 2013, when he ran surprisingly well as an independent candidate in the general election after losing decisively to Harp in the primary. Harp won her first general election for mayor, 11,362 to 9,417.

Had Elicker lost the primary Tuesday, he was geared to run as an independent again in November. Harp was cross-endorsed by the Working Families Party this year and could run in November on their ballot line, but that is considered unlikely. 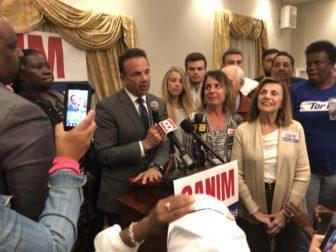 Ganim had an unexpectedly tense night after the polls closed.

Moore led on the machine count, but Ganim eventually claimed victory after the absentee ballots were counted.

“It’s a humbling experience, as much as we stand up here and shout into a microphone, we quietly whisper the enormous obligation that we are elected to have, to lead this city with all of us, and to ensure four years from now, or whenever it is, that we leave it a better place than we found it,” Ganim said.

As was the case in New Haven, Ganim faced criticism about the police response to crime. Ganim said Tuesday night he would govern with an eye to improving public safety, creating more jobs and giving residents more opportunities for a better quality of life.

“Four more years for Bridgeport progress, lets do it together,” Ganim said as he walked off the stage at Testo’s, the restaurant and catering hall owned by the city’s Democratic chair, Mario Testa. 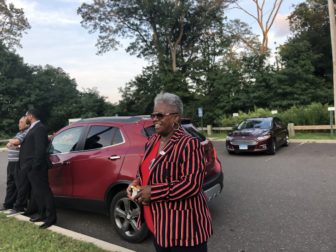 State Sen. Marilyn Moore, seen here at the polls on primary day, was optimistic about her chances to beat Mayor Joe Ganim.

Moore had promised to continue campaigning, but Hearst Connecticut reported Tuesday night that the secretary of the state’s office says she submitted insufficient petitions to gain a place on the November ballot.

The other Democratic mayors facing primaries won easy victories. In Hamden, Mayor Curt Leng won his Democratic primary over Lauren Garrett, 3,219 to 2.038. In West Haven, Mayor Nancy Rossi had 2,703 votes to 1,773 for Debbie Collins and 1,002 for Edward O’Brien.

In Oxford, the challenger, Betti Hellman, narrowly defeated the endorsed candidate, Scott Flaherty, in a Democratic primary for first selectman

In Middletown, where Mayor Dan Drew did not seek re-election after an unsuccessful run for governor, 27-year-old Ben Florsheim won the Democratic nomination in a four-way race, beating William J. Russo, 1,359 to 1,181. Mary A. Bartolotta,  the endorsed candidate, finished third.

In East Haven, where Mayor Joseph A. Maturo did not seek re-election, “Big” Steve Tracey beat Salvatore R. Maltese in a Republican primary, 727 to 448. In Preston, the GOP challenger, Gregory Moran Sr., beat the endorsed candidate, Edward N. Gauthier, 99 to 50, according to the secretary of the state’s office. Preston Selectman Robert Congdon is retiring after 24 years in office.

Below are the unofficial results for the nominations of chief elected officials.