Moore demands an investigation — by everyone 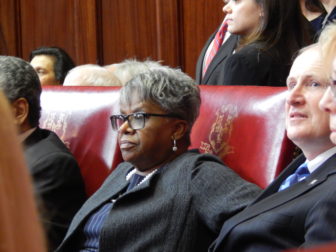 “I cannot stand aside and let the voters of Bridgeport be silenced,” Moore said. “Today, I stand with Bridgeporters, ​my community,​ to demand that the State and National Democratic Party, Governor Ned Lamont, and state and federal authorities conduct a full investigation of absentee ballots cast in the Primary election. The days of staying silent and therefore complicit in blatant voter fraud in Bridgeport must end now.”

State and federal law-enforcement authorities generally respond to sworn complaints or evidence of wrongdoing, not demands in press releases. The governor has no jurisdiction.

Moore’s statement made no specific allegations of wrongdoing, nor did it say whether the candidate or her campaign had filed a formal complaint with any law-enforcement agency with jurisdiction to investigate absentee-ballot fraud or whether it had surveyed any of the 1,200 voters who cast absentee ballots.

Neither Moore nor her campaign manager, Gemeem Davis, were available to answer questions. Ganim could not be reached.

Her statement caught the governor’s office and Democratic State Chairwoman Nancy Wyman by surprise. Lamont’s office offered a sharp reply: “There are multiple avenues that Sen. Moore can explore in regard to investigating or challenging election results. Those are powers that do not lie in the Office of the Governor.”

Wyman was unaware of the call for her to investigate until called by a reporter. She noted that allegations of impropriety at nominating conventions are handled by state parties, but the parties have neither the staff nor jurisdiction to review Bridgeport’s handling of absentee ballots.

Moore won a narrow majority of the votes cast at polling places, but her margin at the polls was overwhelmed by a 3-1 advantage in absentee ballots cast in favor of Ganim, who made a political comeback in 2015, a dozen years after a corruption conviction forced his resignation as mayor.

“A clear majority of voters said no to the old politics, in a clear repudiation of a party machine that has stood in the way of progress for far too long,” Moore said. “This demand, however, was denied to voters. Questionable absentee ballots poured in, denying their voice.”

She had been expected to announce Thursday she would continue campaigning as a write-in candidate, a difficult but not impossible undertaking. Waterbury Mayor Michael Jarjura was re-elected via a write-in campaign after losing a Democratic primary in 2005. U.S. Sen. Lisa Murkowski of Alaska did the same in a statewide race after losing a Republican primary in 2010.

Instead, Moore said in a 351-word statement that she was considering “every possible option” and made the demand for an investigation.

“Bridgeporters, community organizations and the press have been asking the authorities when will they step in and do something about absentee ballot abuse for months to no avail. Their silence has been deafening and is antithetical to American Democracy and the ideals, principles and values of the Democratic Party. “