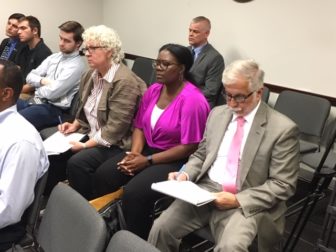 Gemeem Davis, the manager of the Marilyn Moore campaign, center, and Max Medina, at right, the campaign’s lawyer.

With unanimous votes to subpoena election records and other evidence, the State Elections Enforcement Commission opened an investigation Monday into allegations of voter fraud in the Bridgeport mayoral primary won by Mayor Joseph P.  Ganim on the strength of a lopsided absentee- ballot vote.

The commission issued subpoenas for a broad array of elections records, as well as visitor logs and video surveillance for two public housing complexes, P.T. Barnum and Harborview Towers. The campaign of Sen. Marilyn Moore, the Democratic challenger, has alleged absentee-ballot fraud at public housing for seniors and others, but Ganim said the heavy vote by absentees is no evidence of fraud.

“Bridgeport has a large percentage of handicapped and seniors. I have strong support from them. They have a right to vote,” Ganim said in a telephone interview.

The commission acted on a referral Friday from the secretary of the state’s office, based on reporting by Hearst Connecticut Media, the owner of the Connecticut Post in Bridgeport. Moore also filed a complaint Monday that suggests SEEC act creatively and ask the attorney general’s office to assist in an expedited investigation and seek a court order placing Moore on the November ballot on a line above Ganim.

State law allows SEEC to “refer to the Attorney General evidence for injunctive relief,” though the Moore campaign’s lawyer, Max Medina Jr., acknowledged it was unclear if that relief included seeking a court order for a new election or to place a candidate on the ballot.

Medina said they campaign also was exploring a more conventional route: Filing a lawsuit in Superior Court seeking either a new election or an order including her on the ballot in November. The deadline for challenging the primary results in court is Tuesday, according to the secretary of the state’s office.

With its complaint to SEEC, Medina said that Moore and her supporters were seeking an aggressive review of what has been accepted for too long as business as usual in Connecticut’s largest city: Cajoling residents of public housing to sign applications for absentee ballots, even when they did not meet the strict criteria in state law for voting by absentee.

“Their will was thwarted by sinister folks playing dirty, violating the law,” said Medina, a lawyer for Zeldes, Needle & Cooper. “We’re tired of people saying, ‘What do you expect? It’s Bridgeport.’ I am a proud Bridgeporter. We don’t want Bridgeport known for dirty politics. We believe this is a tipping point.”

The Connecticut Post quoted voters who said they felt pressured to vote for Ganim by absentee, and the paper recounted a checkered history of absentee-ballot abuse in a second story, “Long history of absentee ballot chaos, complaints in Bridgeport.”

“Usually when people lose, they take it gracefully.”

“The allegations contained in the Connecticut Post story are serious enough to warrant a comprehensive investigation by the State Elections Enforcement Committee,” Secretary of the State Denise Merrill said. “Although my office does not have authority to investigate allegations, we stand ready to assist SEEC in any way we can. I intend to use the full authority granted to my office to ensure that free and fair elections are held in Bridgeport, and across Connecticut, on November 5th.”

But SEEC has no authority to place Moore on the ballot. It can assess fines and other civil penalties and refer evidence to criminal investigators, if warranted.

The Moore campaign said it is gathering testimony from witnesses about possible instances of fraud, but the complaint filed Monday offers no evidence beyond the Hearst Connecticut Media stories.

One story described Rhonda Latham, 67, who says she wanted to vote for Moore, but was pressured by a “helper” to vote for Ganim. “I did not want to vote for Ganim,” she told Hearst. “These people push you into vote…and they do it for you.”

Latham lives at Harborview Towers, a complex for seniors and the disabled. The subpoenas demanding “any and all video of public areas” at Harborview and P.T. Barnum on Aug. 20, 21 and 22nd went to Park City Communities, which manages 2,600 affordable housing units in Bridgeport.

Those dates are when absentee ballots would have arrived in the mail.

Jessenia Rios of P.T. Barnum told Hearst that an absentee ballot for her routinely appeared in the mail. P.T. Barnum is in a precinct where Ganim topped Moore in the absentees, 107 to 11, while Moore was favored in votes cast in person, 221 to 167.

“Usually when people lose, they take it gracefully,” Ganim said.