Murphy says gun deal is possible, despite impeachment and attacks by Trump 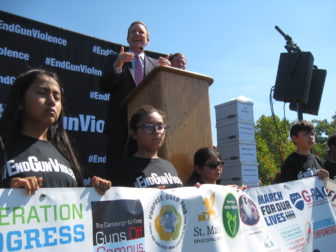 While an impeachment inquiry may make it more difficult to reach a deal with President Donald Trump over new gun laws, advocates continued to press for them.

Washington – New federal gun laws may be an early casualty of the enmity between President Donald Trump and congressional Democrats who have just launched an impeachment probe of the president.

Sen. Chris Murphy, who was trying to negotiate a bill with the White House that would broaden FBI background checks of gun purchasers, had predicted that his decision to support a House impeachment inquiry of the president would minimize, or has even eliminate, the chances of a deal.

But on Wednesday afternoon, Murphy said White House officials reached out to him Tuesday evening, just hours after House Speaker Nancy Pelosi announced the beginning of an impeachment inquiry.

“They were pushing back on my pessimism,” Murphy said. “I’m glad to continue to talk to the White House.”

Murphy said the draft of a gun background bill submitted by U.S. Attorney General William Barr to members of the Senate earlier this month is a “flawed, but good proposal” that could lead to a deal.

“The next step is the White House’s,” he said.

But in remarks Wednesday in New York, where the president was attending a meeting of the United Nations, Trump called the impeachment inquiry, supported by the entire Connecticut congressional delegation, “a manufactured crisis,” and said he didn’t know whether Democrats “are going to have time to do any deals,” including one on background checks for gun buyers.

“I don’t think they can do any deals,” the president said. “ You know, we were working on guns — gun safety. They don’t even talk — all they’re talking about is nonsense.”

The president also said “I’ll tell you what: Nancy Pelosi is not interested in guns and gun protection and gun safety. All she is thinking about is this. She’s been taken over by the radical left, the whole Democratic Party.”

Hours before Pelosi announced an impeachment inquiry into Trump on Tuesday, the president called her to discuss gun legislation. But, according to lawmakers familiar with the call, she soon changed the subject to his phone call with the Ukrainian president in which they discussed investigating former Vice President Joseph Biden, a leading contender for the Democratic presidential nomination, and his son Hunter, the impetus for the impeachment inquiry.

And Trump, in an often rambling defense of his July 25 phone call to Ukrainian President Volodymyr Zelensky, also accused Murphy Wednesday of “threatening” the Ukrainian leader when the senator visited Kiev earlier this month.

“Senator Chris Murphy literally threatened the president of Ukraine that if he doesn’t do things right, they won’t have Democrat support in Congress,” Trump said.

Murphy said he “made it clear that President Zelensky should not be taking orders from the Trump campaign,” and decried the president’s attempts to pull the Ukrainian president “into corruption” by asking him to investigate the Bidens.

“I understand these are serious times,” Murphy said. “I think what the president did is a gross violation of the rule of law, but he is still the president. If we can get some legislation done that saves lives, then I am game to consider it.”

The House Judiciary Committee on Wednesday held a hearing on a bill that would ban assault-style weapons. A federal law implemented in 1994 bans these semi-automatic rifles. The law, however, expired in 2004 and has never been reauthorized by Congress.

At the hearing, deep partisan divisions about gun control were on display.

“Assault weapons have been repeatedly used as weapons of deadly violence on our citizens. In just the last two years Las Vegas, Parkland, Pittsburgh, Poway, Gilroy, Midland, and Odessa have all seen horrific shootings at the hands of a gunman with assault weapons,” said Judiciary Committee chairman Jerrold Nadler, D-N.Y. “And only last month, we added El Paso and Dayton to the list of communities shattered by mass violence perpetrated by a gunman armed with assault weapons.”

Republicans said the law had no impact and the assault weapons ban would be a violation of 2nd Amendment rights.

A witness invited to testify by GOP lawmakers, Dianna Muller, who served in the Tulsa Police Department for 22 years and is the founder of gun advocacy group The DC Project, said that such a ban would force lawful gun owners to either give up their weapons or become criminals.

Should the government pass an assault-weapons ban, Muller said, “I will not comply.”

Meanwhile, at the rally outside the U.S.  Capitol, members of a coalition of gun control activists, including the Newtown Action Alliance, and their congressional allies, including Murphy and Sen. Richard Blumenthal, urged the Senate to vote on an expanded background check bill approved by the U.S. House in February.

“Do your job,” shouted the crowd, which included many family members of victims of gun violence.