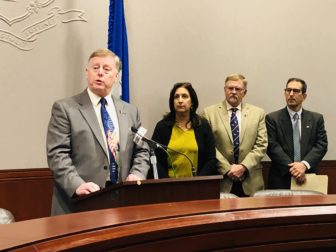 State Rep. Mike France, far left, and other members of the legislature’s Conservative Caucus, speak out Thursday against a plan to repeal the religious exemption to vaccines.

Proponents of the state’s religious exemption to mandatory immunizations on Thursday asked Gov. Ned Lamont and Health Commissioner Renee Coleman-Mitchell to rescind their support for a repeal of the controversial provision.

Lamont and Coleman-Mitchell last month declared that, amid a decline in the number of Connecticut students vaccinated against measles, mumps and rubella, they are backing an effort to eliminate the exemption.

That has angered members of the legislature’s Conservative Caucus, who were joined by parents, lawyers, religious officials and activists Thursday in calling on the governor and lawmakers to put the brakes on the proposal.

“It is important today to stand up and talk about these very critical times and these issues that are of importance to individuals,” State Rep. Mike France, R-Ledyard, said. “Our focus is really on two main things. The first is a parent’s right to make medical decisions for their children, and the second is constitutional rights … If the religious exemption is repealed, it would infringe on both of those.”

Democratic leaders in the House and Senate have pledged to introduce a repeal during the upcoming legislative session, which begins in February.

Lamont and the health commissioner recommended the exemption be eliminated, effective Oct. 21, 2021, to give parents time to prepare for the change. Vaccinations are required for all students entering public and private schools, but home-schoolers are not covered.

The proposed legislation would not force children to be immunized, but it would bar most unvaccinated children from enrolling in Connecticut’s public and private schools. Coleman-Mitchell and other state officials have cited concern for children with compromised immune systems who cannot be vaccinated for medical reasons.

Attorney General William Tong has told lawmakers that it would not violate the constitution to roll back the religious exemption.

“In my 28 years of being a resident of Connecticut and also an active citizen … never have I ever seen mothers in the hallway crying during a legislative hearing, terrified of losing the most precious right they have,” Jennifer Shafer Wood, a Portland resident and self-described activist, said Thursday. “We’re asking these public officials to please stop the fear mongering. … We’re asking the public to open their eyes to reason. Constitutional rights like religious freedom and public education are sacred to Connecticut’s citizens.”

Thirteen Republicans who are members of the Conservative Caucus issued a statement last month calling on Lamont and Coleman-Mitchell to reverse their support of the repeal. 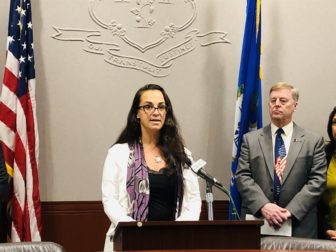 Jennifer Shafer Wood, a self-described activist, asked lawmakers to put the brakes on their proposal.

“Not only is the governor advocating a policy which lacks any legal foundation, his position has no foundation in public health,” they wrote. “By calling to repeal the religious exemption, the governor is again substituting his own politics for sound public health policy and rule of law.”

The Republicans, including France and state Reps. Anne Dauphinais, Craig Fishbein and Vincent Candelora, also asked members of the public to contact their local lawmakers and express objections to a repeal.

Republican leaders in the House and Senate have not taken a position on the proposal.

Senate Minority Leader Len Fasano said he is not familiar with the effort and declined to remark on it,.

“I haven’t focused in on that,” he said recently. “I don’t know exactly what they’re even suggesting. It’s in such an amorphous state, it’s almost like a hypothetical. I have a concern about it, but I want to see what we’re talking about before I start talking about it.”

House Minority Leader Themis Klarides said she is examining both sides of the issue.

“There is no caucus position on this matter, but I believe we must balance the individual rights and health concerns that have been raised, and the process is now playing out in public,” she said in a statement. “We are going to see sincere disagreements over a very important public policy discussion.’’