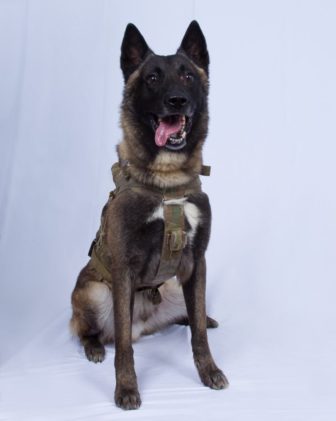 Although the Pentagon is keeping the dog’s identity anonymous, Trump tweeted a photo of the K-9 who led the raid on ISIS leader.

Washington – When the world heard of the daring U.S. raid on an ISIS leader this weekend, Sen Richard Blumenthal, a best friend of military dogs, joined other lawmakers in lauding the courage of American special forces – and a tenacious canine.

“We must also recognize the brave service of military working dogs, who work honorably alongside our troops & played a key role in the raid against al-Baghdadi. They too are heroes,” Blumenthal tweeted.

Although no U.S. forces were killed in the Saturday evening raid that led to the death of ISIS leader Abu Bakr al-Baghdadi, a military working dog suffered injuries in the line of duty.

“Our K-9, as they call — I call it a dog, a beautiful dog, a talented dog — was injured and brought back,” Trump said on Sunday. “But we had no soldier injured.”

According to official accounts of the raid, the dog chased Abu Bakr al-Baghdadi into a tunnel and cornered him. With no place to go, the terrorist leader blew himself up along with three of his children, who he was using as human shields.

As a member of the Senate Armed Services Committee, Blumenthal for years has sought more humane treatment of military dogs — and that effort could get a boost from this weekend’s raid on the ISIS leader.

Military dogs save the lives of more than 100 U.S. troops every year. But when they were no longer able to perform their jobs, they were considered excess military equipment, like an out-of-commission tank or an obsolete rifle, and often left behind in a theater of war or overseas base.

In 2013, Blumenthal succeeded in changing the lives of many of these highly trained animals that sniff out narcotics and bombs and whose keen sensory perceptions can alert U.S. forces to enemy troops more than a mile away.

In a massive defense authorization bill, Blumenthal sponsored an amendment that would reclassify retired military dogs as “canine members of the armed forces,” guaranteeing them a free trip home.

“These dogs are so much more than a rifle or a tank. They are living, breathing heroes who have saved the lives of our troops and provided many of our veterans with companionship long after they retire from service,” Blumenthal said. 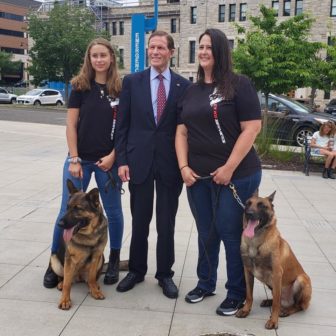 Sen. Richard Blumenthal has been a leader in congressional efforts to seek better treatment for military working dogs.

However, the language concerning military dogs in the final defense bill was weakened because of objections from the chairman of the Senate Armed Services Committee, the late Sen. John McCain, R-Ariz.

The final bill said the military was allowed, but not required, to transfer the animals to Lackland Air Force Base in Texas, or another location that would prevent adopters from having to pay the high cost of transporting the dogs from overseas.

Blumenthal also sought in 2013 to require the Pentagon to award medals to dogs who have performed heroic acts or have been killed in action, and establish a doggie version of the Department of Veterans Affairs to provide retired dogs a system of veterinary care.

But instead of the canine equivalent to the Purple Heart, the final defense bill mandated that heroic dogs would receive a letter of commendation. And there was no provision for veterinary care.

A 2016 defense bill required the military to bring home all working dogs and included a Blumenthal provision that guaranteed adoption preference to former handlers.

And in the Senate version of this year’s defense bill, Blumenthal has included language that would ensure returning military dogs have access to veterinary services that addresses any health issues related to deployment while relieving adopters of some of the immediate financial burdens of medical costs.

That Senate bill must be reconciled with a House version of the defense authorization bill. But this weekend’s raid on Abu Bakr al-Baghdadi is likely to boost efforts to keep Blumenthal’s provisions regarding military dogs in a final bill.

We do not know the name or breed of the hero of this weekend’s raid on an ISIS leader.

On Monday, the Pentagon said the dog had overcome its injuries, but would remain anonymous.

“We’re not releasing the name of the dog right now,” says Gen. Mark Milley, the Joint Chiefs chairman. “The dog is still in theater.”

But Trump tweeted out a photo of the courageous canine.

It appears to be a Belgian Malinois, a favorite breed of the military that is sometimes confused with a German Shepherd but is smaller and some say more agile. The American Kennel Club says the breed is “intelligent and trainable…and possesses a strong desire to work and is happiest with regular activity and a job to do.”

A Belgian Malinois dog named Cairo was part of the May 2011 U.S. military raid in which al Qaeda leader Osama bin Laden was killed.