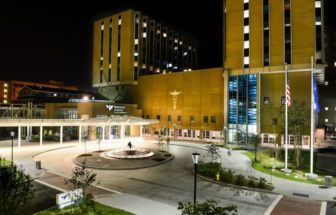 Bridgeport Hospital had the highest total margin in the 2018 fiscal year, according to the report released by the Office of Health Strategy.

The finances of Connecticut’s hospitals remained mostly unchanged in 2018, with slightly more hospitals turning a profit but seeing a drop in the average margin.

A majority of Connecticut’s acute care hospitals – 24 of the 28 – ended the fiscal year in the black, up from 23 the year before, according to a report released Wednesday by the state’s Office of Health Strategy.

“Health care costs are high and growing — we hear that every day from residents, and we see that reflected in the data,” said Victoria Veltri, executive director of OHS.

Other hospitals with negative total margins were Rockville, Sharon and Milford.

“We are pleased that hospitals’ operating performance has improved and is stable,” said Michele Sharp, a spokeswoman for the Connecticut Hospital Association. “Hospitals can then invest in things like workforce development, technology, and community health. However, health systems continue to absorb costs for physician practices, which they subsidize to maintain needed access to care.”

The cost of treating uninsured and under-insured patients — relative to the other expenses that hospitals faced in 2018 — remained relatively flat.

But the study also found uncompensated care charges rose 14.5% in 2018.

What’s the difference between charges and uncompensated care costs? The former reflects the initial prices hospitals set for thousands of items and services they provide.

Neither the government nor most patients or insurers actually pay these full charges. Hospitals have significant discount policies that produce a lower cost.

But the growth in charges remains significant since they can influence the actual costs that are negotiated with insurance companies.

Most of the 2018 growth in uncompensated care charges, about 60%, was tied to three hospitals: Norwalk, Stamford and Saint Vincent’s Medical Center in Bridgeport.

The report, which is released annually each fall, comes as state officials are negotiating with the hospital industry to resolve a four-year old lawsuit tied to Connecticut’s provider tax.

Enacted in 2011, the levy initially was billed as a tax in name only.

In the program’s first year, the state collected $350 million from the industry — then redistributed and returned all of those funds to Connecticut hospitals along with an extra $50 million.

This back-and-forth system, which is employed in most states, enabled Connecticut to qualify for more federal Medicaid dollars. But over time, as the state’s economy was slow to recover from the last recession, the system evolved into a hefty tax on the hospital industry.

The Connecticut Hospital Association filed suit, charging Connecticut abused this process. Industry officials have said hospitals have been short-changed by billions of dollars.

Gov. Ned Lamont and CHA officials announced a tentative deal in late May to settle the lawsuit, but have not disclosed full details. Neither the industry nor the legislature has yet ratified a final agreement, but hospital and state officials say talks are ongoing.