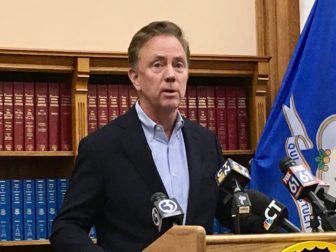 Gov. Ned Lamont’s abilities as a salesman and political strategist are being tested as he enlists corporations and unions in a renewed effort to convince the General Assembly that the key to stable economic growth in Connecticut is a comprehensive and reliably funded vision for a 21st-century transportation system.

The first-year governor, a former cable entrepreneur intent on building partnerships with business, held a press conference Tuesday to celebrate statements of support from seven major employers in Connecticut, though no corporation was represented and it is unclear whether any CEOs will engage in the direct lobbying of lawmakers on the governor’s behalf.

“A modern, efficient transportation system is vital to our state’s competitiveness,” said a statement issued by Robert F. Leduc, the president of Pratt & Whitney. “The governor’s proposal is an important step forward. I urge all of our leaders in state government to work together with urgency to pass a fiscally responsible transportation plan that will help position Connecticut for the future.”

While all urged legislators to work with Lamont, only the chief executive of Stanley Black & Decker pointedly asked that lawmakers support the governor’s plan, including its reliance on limited highway tolling to finance it.

“Fixing the state’s transportation infrastructure is an essential component to improve Connecticut’s competitiveness, economic development and growth, as well as to improve the quality of life for all residents,” said James M. Loree of Stanley. “While no one wants to increase costs to Connecticut residents, we believe the proposal provides reasonable funding mechanisms for a statewide, comprehensive transportation plan.”

Lamont wants to use $320 million in annual revenue from 14 tolls to leverage low-cost federal financing of projects that he says would restore the state’s infrastructure to a state of good repair, speed commutes on Metro-North and highways, and stabilize the Special Transportation Fund. Legislators generally applaud the scope of his plan, while balking at even limited tolls.

“I urge our state legislators to set aside their partisan differences and embrace the governor’s plan,” Loree said. “Connecticut’s ability to attract and retain businesses for healthy economic growth and job creation depends on it.”

Will Loree be delivering that message to lawmakers in a personal way, working the phones?

“We don’t have a specific plan outlined, but we would look for opportunities where we could be supportive going forward,” Shannon Lapierre, the vice president of communications at Stanley, said in a telephone interview.

Lamont smiled when asked if the endorsements might carry more weight if the companies’ chief executives stood with him Tuesday. “I hope they are investing in the state of Connecticut, hiring people and making a profit,” Lamont said. “That’s what they do.”

The governor and his top aides are to meet Wednesday with the Senate Democratic majority, whose leaders see any tolls as politically risky without a measure of Republican support that does not appear to be coming.

Lamont was dubious of financing the plan without new revenue, saying that shifting $320 million in existing appropriations to transportation was impractical. And he doubted that pot or gambling could provide a revenue stream necessary to pay off federal loans.

Lamont did not have a particularly forceful answer when asked what he would say to Democrats rattled by the municipal elections. Democrats made some gains, but Republicans did well in at least four communities where the GOP made tolls an issue.

“Obviously municipal elections were a whole variety of things, and I think Democrats did pretty well in that,” Lamont said. “But more importantly, I don’t think this is an issue you want to linger. It’s lingered for the last 20 years. Do you really want this hanging over you?”

In response to questions, Lamont went off script and said he was willing to campaign publicly for tolls, perhaps holding a town-hall style meeting in a community where a tolling gantry is planned. But that is not an element of his administration’s current plans, which focus on lawmakers.

Union leaders promise to push Democrats to support the plan, but those calls have not yet started.

“We haven’t worked anybody yet,” said David Roche, the leader of the Connecticut Building Trades. “We’re waiting to see where the dust settles.”

The Lamont administration says CT2030 would generate 26,000 construction jobs every year for the next decade. Overall unemployment is low in Connecticut, but Roche says construction is lagging.