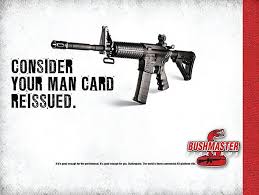 Family members of Sandy Hook shooting victims say ads like this one motivated Adam Lanza to use a powerful weapon.

Washington – The U.S. Supreme Court on Tuesday said it would not hear an appeal of a Connecticut court decision that allowed the families of Sandy Hook shooting victims to continue their lawsuit against the Remington Arms Co., maker of the weapon used in the infamous 2012 massacre.

The Supreme Court’s ruling will not only allow the lower court’s decision to stand, but will also potentially open the door to more lawsuits from victims of gun crimes.

“The families are grateful that the Supreme Court upheld precedent and denied Remington’s latest attempt to avoid accountability,” said a statement from Josh Koskoff,  the attorney representing the families.

The case, brought by family members of those killed in the Sandy Hook Elementary School shooting that left 20 children and six adults dead, was based on a “loophole” in a 2005 federal law, known as the Protection of Lawful Commerce in Arms Act, or PLCAA. It broadly, but not completely, shields firearm manufacturers and dealers when crimes are committed with their products.

That loophole focuses on “action in which a manufacturer or seller of a qualified product knowingly violated a State or Federal Statute applicable to the sale or marketing of the product.”

In their lawsuit against Remington, the Sandy Hook families say the gun Adam Lanza used  – a semi-automatic Bushmaster rifle  – was marketed to promote its “assaultive qualities, military uses, and lethality.”

Remington had appealed a 4-3 ruling in March by the Connecticut Supreme Court to the U.S. Supreme Court. That ruling agreed with a lower court judge’s decision to dismiss most of the families’ claims, but it also found PLCAA did not prevent the families from bringing a lawsuit based on wrongful marketing claims under the state’s  Unfair Trade Practices Act.

The family members say Remington marketed the Bushmaster in a manner that inspired Adam Lanza’s actions and encouraged him to choose a weapon that would maximize the damage he could inflict.

“The gun industry and the gun lobby have worked for years to convince Americans that AR15s are ‘modern sport sporting rifles,’ when in reality they are nothing more than weapons of war used to hunt our children and loved ones in our schools, places of worship and other public places all across America,” said Po Murray, chairwoman of the Newtown Action Alliance.

Remington says there’s no proof of that and appealed the Connecticut Supreme Court’s decision to the U.S. Supreme Court, arguing the Connecticut court used a too-broad interpretation of PLCAA’s exception and that the Second and Ninth Circuits have rejected similar lawsuit

With the Supreme Court’s decision to reject the Remington appeal, Koskoff said the families are ready to resume discovery and proceed toward trial  “in order to shed light on Remington’s profit-driven strategy to expand the AR-15 market and court high-risk users at the expense of Americans’ safety.”

Remington did not have an immediate response Tuesday to the Supreme Court’s action.

The Connecticut-based National Shooting Sports Foundation, a group of Republican attorneys general, and 22 current and former GOP members of Congress had also backed the appeal.

“The AR-15 is a weapon of war designed to inflict maximum lethality and should never have been marketed to civilians,” Tong said. “Connecticut’s consumer laws were designed to protect against these kinds of harmful commercial activities.”

Tong also said “the Protection of Lawful Commerce in Arms Act is not an impenetrable shield against all responsibility.”

The families still face a tough court battle to prove Remington’s marketing and advertising practices made the gun manufacturer liable for the Sandy Hook murders.

“The Supreme Court’s action today brings Sandy Hook families one step closer to justice – and is another crack in the legal armor of the gun industry,” said Sens. Richard Blumenthal and Chris Murphy and Rep. Jahana Hayes, D-5th District,  in a joint statement. “For years, gun manufacturers have been allowed to operate with near-blanket immunity – producing weapons of war and marketing them to the masses with zero accountability.”

The Connecticut lawmakers also said “this critical victory” reinforces the need for Congress to repeal PLCAA,  “unlocking the doors to justice for all victims of gun violence.”

“We have seen countless lives lost and senseless devastation in our communities as a result of this weapon’s use,” Lamont said. ” Today may not bring full closure for those impacted, but it is a step toward progress in their fight for justice. ”