Debate takes place during another school shooting in California 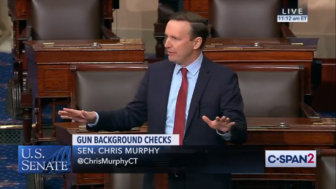 Washington – As a 16-year-old gunman assaulted fellow students at a high school in Santa Clarita, Calif., Thursday morning, Sen. Chris Murphy tried to force a vote in the U.S. Senate on a gun background check bill.

Murphy was unaware at the time of the latest mass shooting. But he predicted it.

“We can’t go 24 hours without news of another mass shooting somewhere in America,” Murphy said as he asked for support from his Senate colleagues. “My kids and millions of others hide in corners of their classroom or in their bathrooms preparing for a mass shooting at their school and this body does nothing about it.”

Murphy, a longtime advocate of various gun-control measures, this time wanted the U.S. Senate to vote on H.R.8, a bill the Democratic-led U.S. House approved in February. He tried to force a vote by asking unanimous consent of the senators on the floor, a procedure that would do an end run of Senate Majority Leader Mitch McConnell, who says the Senate will not vote on any gun bill that does not have President Donald Trump’s approval.

But Murphy’s effort was blocked by an objection from Sen. Cindy Hyde-Smith, R-Miss.

“Many questions about this legislation need to be answered before it’s forced upon law-abiding gun owners,” she said. “If I wanted to give my best friend’s son or grandson my hunting rifle, would we first have to appear before a licensed gun dealer and go through a lengthy and potentially expense background check?”

Sen. Richard Blumenthal said “we ought to be furious, not just frustrated, but furious at the sad objection to moving forward.” He then announced to his Senate colleagues that there was an active shooter in a school in Santa Clarita.

A 16-year-old  Saugus High School student had pulled a gun from his backpack and opened fire on classmates before turning the gun on himself, law enforcement authorities said. Two students, a 16-year-old girl and a 14-year-old boy, died at a hospital and the shooter was in grave condition.

Despite the increasing numbers of mass shootings, the National Rifle Association and other gun rights groups have persuaded Trump to back away from some of the initiatives, including an expansion of background checks the president once endorsed. And the latest school shooting isn’t likely to end Congress’ stalemate on guns, or the rancorous debate in Connecticut.

Scott Wilson, president of the Connecticut Citizens Defense League,  said “once again two U.S. Senators are grandstanding for gun control before any facts are sorted out.” 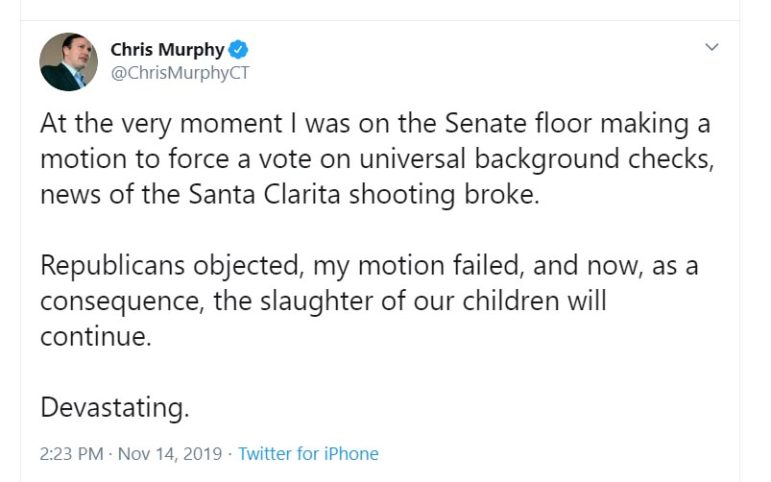 “Today we have families that have lost children in a so-called ‘gun free zone.’ Neither senator is calling for corrective legislation to deal with these types of failed policies,” Wilson said. He also observed that the current background check system did not stop the Saugus High School shooter from gaining access to a firearm.

Those who support expanded background checks say they might not stop every shooter, but would  stop some dangerous people from obtaining weapons.

The House background check bill Murphy tried to bring to the Senate floor is comprehensive. It  would expand FBI background checks to sales at gun shows and by individuals over the internet. Currently, under federal law, only licensed gun dealers must perform background checks for anyone seeking to purchase a firearm.

Murphy has been working with Sens. Joe Manchin, D-W.Va , and Pat Toomey, R-Pa., on a more modest bill and has been seeking support from the White House for that legislation.

Meanwhile, U.S. Attorney General William Barr on Wednesday said discussions about any new background-check legislation have been sidetracked by the impeachment process on Capitol Hill.

“The impeachment proceedings right now are in the House of Representatives,” Murphy said.  “The discussion on the future of a background check bill was in the Senate. It is happening between myself and Senator Manchin and Senator Toomey. We are still at the table ready to negotiate a compromise version of a background checks expansion act, and we’ve frankly got lots of time on our hands in the Senate.”