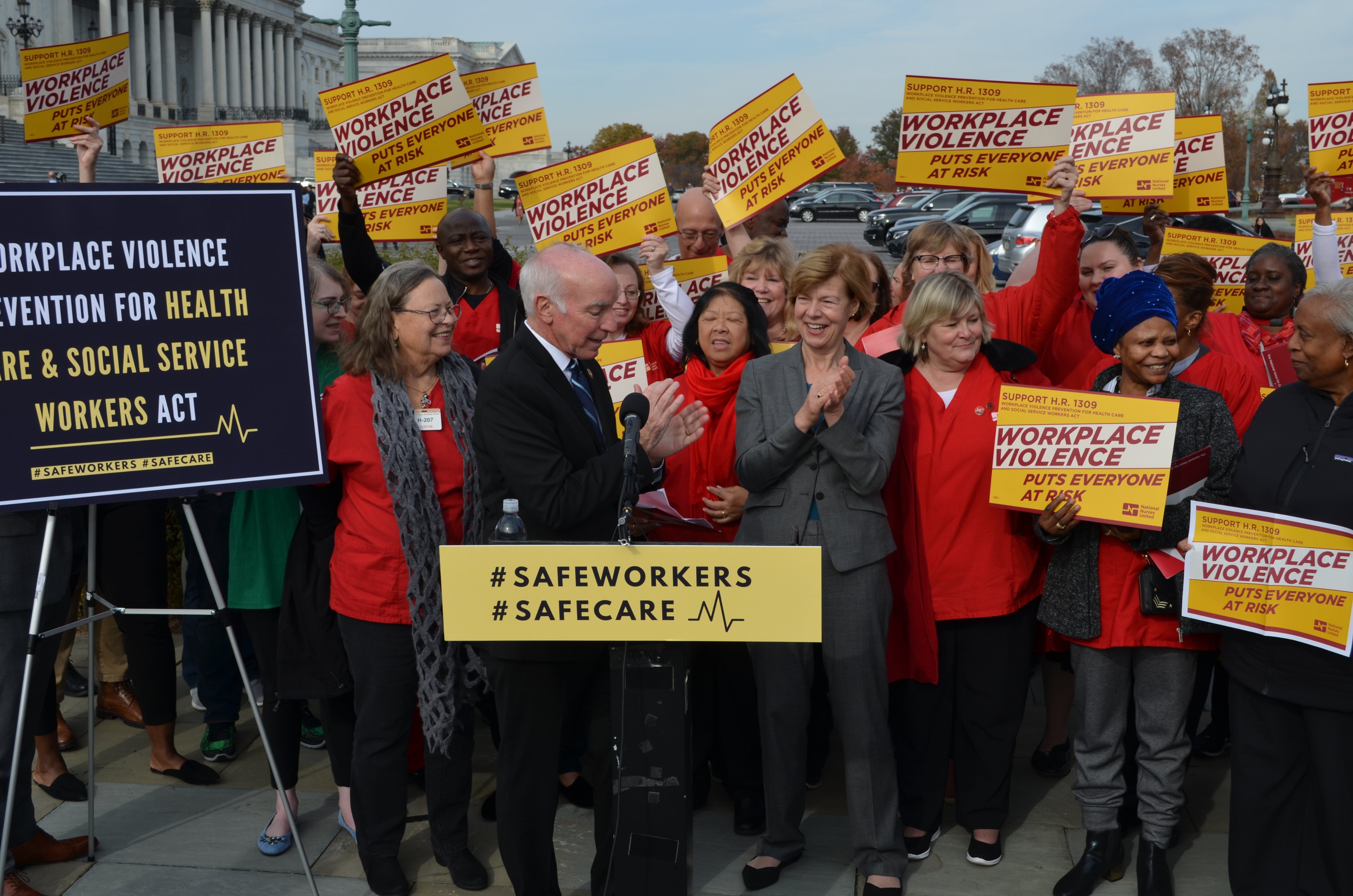 Rep. Joe Courtney and Sen. Tammy Baldwin at a press conference with supporters of the Workplace Violence Prevention for Health Care and Social Service Workers Act.

Washington – The U.S. House on Thursday approved a bill sponsored by Rep. Joe Courtney that aims to protect  nurses and other health care and social workers who are physically attacked by patients or their family members.

The 251-158 vote on the “Workplace Violence Prevention for Health Care and Social Service Workers Act,” came after House Republican leaders urged GOP lawmakers to vote against it because they said Democrats have prioritized the impeachment inquiry into President Donald Trump over other critical issues.

Still, 32 Republicans voted for Courtney’s bill, as did all Democratic lawmakers who were present.

“This did not happen because of some gentlemanly debate under the Capitol dome,” Courtney said at a press conference after the House vote.

He attributed his legislative victory to the support – and lobbying – by AFL-CIO and other labor groups representing health care and social service workers and the backing of emergency room doctors, nurses and others, including the American Federation Teachers, which represents about 8,000 nurses and health professionals in Connecticut.

Under Courtney’s bill, the Labor Department would have to issue a rule requiring health care and social service employers to implement workplace violence prevention plans and to report all incidences of workplace violence.

The legislation defines workplace violence as any act or threat of force against an employee that could result in a physical injury, psychological trauma, or stress.

Physical and verbal attacks on health care and social service workers are on the rise.

According to the data from the Bureau of Labor Statistics, there were 14.8 nonfatal injuries from assaults for every 10,000 full-time workers across the private health care and social assistance industry in 2018.

Courtney said House approval of his bill is the culmination of a seven-year effort that began in 2013, when the lawmaker asked the Government Accountability Office to study trends of workplace violence in the health care sector and identify options for the Labor Department to curtail it.

“The severity of the problem is sickening and gut wrenching,” Courtney sad.

While health care workers and others support the legislation, the nation’s hospitals say they have adopted voluntary safety guidelines and the legislation is not needed. Courtney’s bill would also cost them money.

The Congressional Budget Office said the cost to private entities would be at least $1.8 billion in the first two years and at least $750 million annually thereafter.

Courtney urged the GOP-led Senate to take up the legislation.

“This is not a typical Washington food fight,” he said. “But an issue that crosses party lines.”