Himes on progress of impeachment inquiry, and what comes next 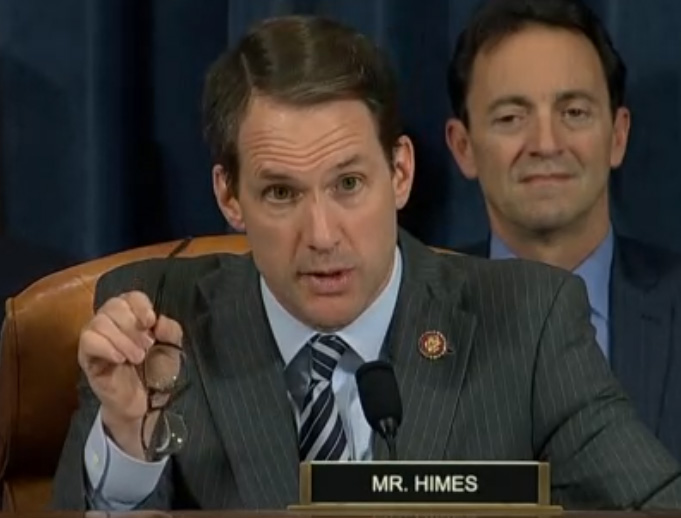 Connecticut Congressman Jim Himes was one of a handful of Democrats who questioned the two witnesses at the first public hearing of the impeachment inquiry last week.

Washington – As President Donald Trump’s impeachment inquiry enters its next phase, U.S. Rep. Jim Himes predicts fellow Democrats will have a hard time agreeing on what charges to bring against the president.

“I suspect we’re going to have an argument within the party,” said Himes, D-4th District.

But there’s little doubt House Democrats are on the march toward impeaching the president.

“I suspect we’re going to have an argument within the party.”

Soon after Congress returns from its Thanksgiving break in early December, the focus of the impeachment inquiry will shift to the House Judiciary Committee, which will consider a report, being drafted now, of the findings from the Intelligence Committee. That report will include information culled from interviews conducted both behind closed doors and in public hearings held last week.

Himes said work on the report could be finished as soon as Dec. 2.  The judiciary panel plans to conduct its first hearing on Dec. 4, and it is in this phase of the inquiry that the president will be able to launch a defense, in person or through his attorneys.

After finishing its work, the House Judiciary Committee is expected to report out articles of impeachment. If the Democratic-led House approves even one of them, which is also likely, the GOP-controlled Senate will act as a jury of the president’s fate.

But there will also be a role in that Senate trial for certain House members, who will become impeachment managers and act much like the prosecuting attorneys. During the Senate impeachment trial of former President Bill Clinton, 13 Republicans on the House Judiciary Committee served as managers.

“It’s the choice of the Speaker,” Himes said.

Himes, in fact, was in line to lead the Intelligence Committee and could have had Rep. Adam Schiff’s role in the impeachment inquiry, a role that included keeping the fractious members of the committee in line during last week’s public hearings.

“I think I get a little more sleep than Adam Schiff.”

Schiff, who joined the panel in 2008, was term-limited since the Intelligence Committee restricts members to no more than four two-year terms. Himes wanted the top job on the panel, but Pelosi gave Schiff a waiver to stay on the panel, made him chairman, and Himes remained its second-senior Democrat.

Himes said he doesn’t know now if he wants Schiff’s job, which made the intelligence chairman a lightning rod for criticism and contempt from the president – who calls him “Schifty Schiff” — and a target for vitriol from Trump supporters.

“I think I get a little more sleep than Adam Schiff,” Himes joked. 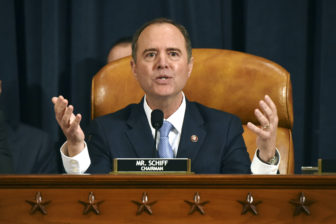 Instead of running the committee, it fell to Himes last week to be the first to question an array of government witnesses right after Rep. Devin Nunes, the senior Republican on the panel, had his turn.

Charged with weaving the Republicans’ counter-narrative — and crafting a case for the exoneration of Trump — Nunes denounced the impeachment inquiry as a plot by evil actors, including Democratic Party operatives, the “fake news” media, and nefarious “deep state” bureaucrats.

“They were defenders of the president and not engaged with the facts,” Himes said of the Republicans on the intelligence panel.

“One that got me emotional, that made me angry, was when first-rate public servants were attacked.”

He ridicules GOP defenses of Trump, including one that maintains the president did not ask for a quid pro quo by pressing for a Ukrainian investigation into former Vice President Joe Biden and his son in return for an Oval Office meeting with the new Ukrainian president and the release of nearly $400 million in U.S. security assistance.

Himes said the testimony of Gordon Sondland, the U.S. ambassador to the European Union, and comments made by Mick Mulvaney, the acting White House chief of staff, laid waste to the “no quid pro quo” defense.

The Republican assertion that there was no wrongdoing by the president because the Ukrainians never launched an investigation into the Bidens and U.S. military aid was eventually released was also derided by Himes. He noted the money was released after a CIA whistleblower made a complaint about a phone call between Trump and Ukrainian President Volodymyr Zelensky in which both the aid and the Bidens were discussed.

But it was the attacks on “bureaucrats” — State Department and National Security Council officials — that prompted the normally laid-back Himes to show flashes of anger, even as he and his Democratic colleagues for the most part avoided responding.

“One that got me emotional, that made me angry, was when first-rate public servants were attacked,” Himes said. 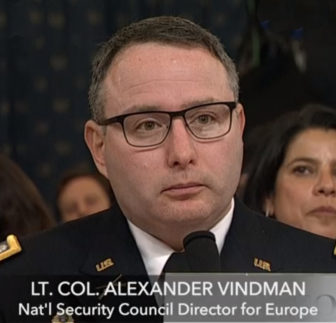 “Lt. Colonel Vindman wore his Purple Heart and the president and others slimed him,” Himes said.

He called another witness, Marie Yovanovitch, who was ousted from her job as the U.S. ambassador to Ukraine and maligned by Trump, “one of the best ambassadors the nation has to offer.”

‘More rather than less’

The nation witnessed both riveting testimony and an unprecedented level of partisan bickering last week, but the acrimony isn’t stopping with the end of the Intelligence Committee hearings.

The House Intelligence report, written by Democrats on the panel, will no doubt lead to more partisan disputes and will likely be defended by Himes.

And a number of Democrats want to pursue House ethics charges against Nunes because of allegations the California Republican met with a former Ukrainian official to get dirt on the Bidens on a taxpayer-funded trip.

When asked if he supported an ethics inquiry, Himes responded, “If Representative Nunes used taxpayer dollars to hunt up dirt on the Bidens – yes.”

And the House Judiciary Committee is almost certain to report out articles of impeachment, generating new GOP attacks on Democrats who write the articles as well as those who vote for them.

“The president used official resources for his own personal gain.”

The main unknown is how many articles of impeachment there will be.

Himes said some Democrats will want “more rather than less,” basing some of the charges on information culled from former special counsel Robert Mueller’s final report of his investigation.

“The Mueller report showed there was a substantial amount of collusion, although it had not raised to the level of a crime,” Himes said. “And Volume 2 (of the report) cited 10 incidences of obstruction.”

Other Democrats will want the articles of impeachment narrowly focused on the Ukrainian scandal, Himes said.

As for himself, he’s waiting to see the articles, but says he won’t support certain things some Democrats want – including a charge based on what they view as Trump’s abusive immigration policy.

“I just don’t know what the articles are going to be,” Himes said.

But there is one thing he knows for certain.

“The president used official resources for his own personal gain,” Himes said.

Republicans in the Senate are unlikely to come to that conclusion, or that the president did anything to merit impeachment, setting up another partisan battle

At this point, a Senate conviction is improbable —  67 senators would need to vote in favor of it, a move that would require 20 Republicans to join with the 47 Senate Democrats and break with the president.

During the Senate trial, both sides will have the opportunity to call witnesses, request documents, and present arguments. Chief Supreme Court Justice John Roberts will preside.

The Republicans are expected to focus on validation of Trump’s desire that Ukraine investigate the Bidens – and press witnesses on the role Hunter Biden played as a highly paid board member of the Ukrainian gas company Burisma while his father was vice president and leading U.S. foreign policy in Ukraine.

“I believe Hunter Biden’s association on the Burisma board doesn’t pass the smell test,” tweeted Sen. Lindsey Graham, R-S.C. on Wednesday. “If a Republican was in the same position, they’d certainly be investigated!”