For Democrats and labor, tolls are a family fight 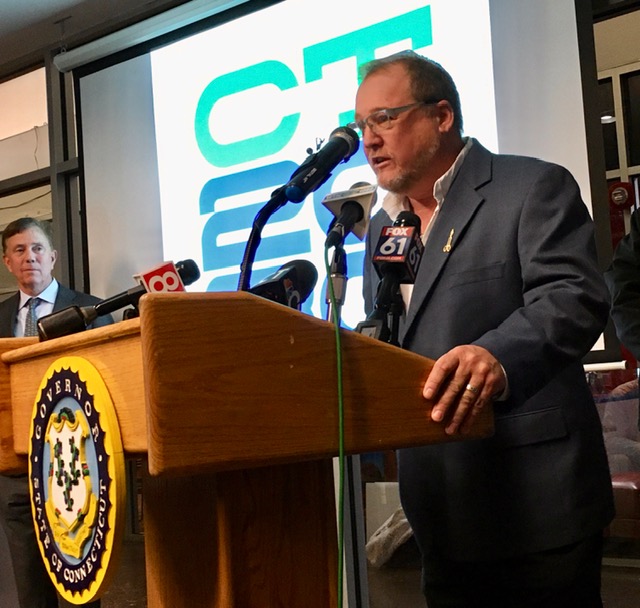 Gov. Ned Lamont watching his ally, Dave Roche of the Connecticut Building Trades, at the rollout of his transportation plan.

The Democrats’ internal struggle over how to finance transportation infrastructure has laid bare tensions between the building trades, a Connecticut labor movement dominated by public-sector unions, and the Democratic lawmakers who see labor unity and support as important to keeping control of the General Assembly in the 2020 elections.

That anger spilled into public view last month after Senate Democrats emerged from a caucus at the State Capitol to effectively kill the governor’s latest transportation financing plan just days after it was released before an appreciative audience of construction workers. Roche found himself shouting complaints at an old friend, Sen. Matt Lesser, D-Middletown.

“Matt’s a really good friend of mine,” Roche said. “I was frustrated.”

“I officiated his daughter’s wedding,” Lesser said. “We go back a ways. I’ve had a long relationship with the trades. A lot of them are close friends of mine. I know they’re frustrated, because these are jobs their members are counting on.”

The tensions have eased — but not disappeared — since Gov. Ned Lamont and Democratic legislative leaders united last week behind a trucks-only tolls plan they say would help finance at least $19 billion in transportation infrastructure improvements over the next decade, creating up to 26,000 construction jobs and returning highways and bridges to a state of good repair.

“If you can’t support our issues, we have to look for people who will.”

With Republicans opposed to any plan with tolls or other new sources of revenue, success or failure now rests with a first-year Democratic governor and the Democratic majorities of the House and Senate. For reasons of politics and public policy, Democrats say they are intent on finding a resolution.

“I think it’s important that this party end this debate once and for all — and do that in January,” Ritter said.

Labor leaders say a failure by Democrats to pass an infrastructure plan would jeopardize what often is a perfunctory task: re-election endorsements of most Democratic lawmakers by the Connecticut AFL-CIO, the statewide federation of unions. Endorsements require a two-thirds vote.

“If you can’t support our issues, we have to look for people who will,” Roche said.

Opposition by the building trades, whose members are generally seen as among the more conservative in Connecticut labor circles, most likely would be enough to dissuade the federation from making many legislative endorsements in 2020, even if the trades lacked the votes, said Sal Luciano, the president of the AFL-CIO.

“I think the endorsement would be a problem for the simple reason of solidarity,” said Luciano, a former state social worker who spent most of his labor career in AFSCME, a public-sector union. “That’s usually enough to block a two-thirds vote.”

Unions represent 16% of Connecticut workers, but they have been a key element of an enduring coalition that has helped Democrats win the last three gubernatorial elections and control of the state House of Representatives for the past 32 years and the Senate for 28 of those 32 years.

“Too often people clump all of organized labor together as this monolithic thing, and it’s not,” said Rep. Sean Scanlon, D-Guilford. “They are a big tent with different interests, and it’s important for us to remember that.”

The AFL-CIO’s legislative victories in 2019 were the passage of the $15 minimum-wage law, a paid family and medical leave program, and post-traumatic stress benefits for first responders. None of those issues were priorities for the building trades, but Luciano says they backed the broader labor agenda.

“When we do endorse, the building trades punch above their weight.”

After two years of sharing power with Republicans in an 18-18 Senate, Democrats hold a 22-14 majority in the upper chamber. They were beneficiaries of get-out-the-vote efforts in 2018 by the Operating Engineers and other construction unions known for their willingness to turn out members for weekend door-knocking.

“When we do endorse, the building trades punch above their weight,” Luciano said.

He said they were especially helpful to Democrats who won what had been Republican seats, such as Norm Needleman of Essex and Mary Daugherty Abrams of Meriden.

Needleman, a businessman who won by just 85 votes in a race in which more than 50,000 votes were cast, said the building trades “were great,” but he declined to attribute his victory to any one factor. “When you win by 85 votes,” Needleman said, “you can point to 86 different things that put you over the top.” 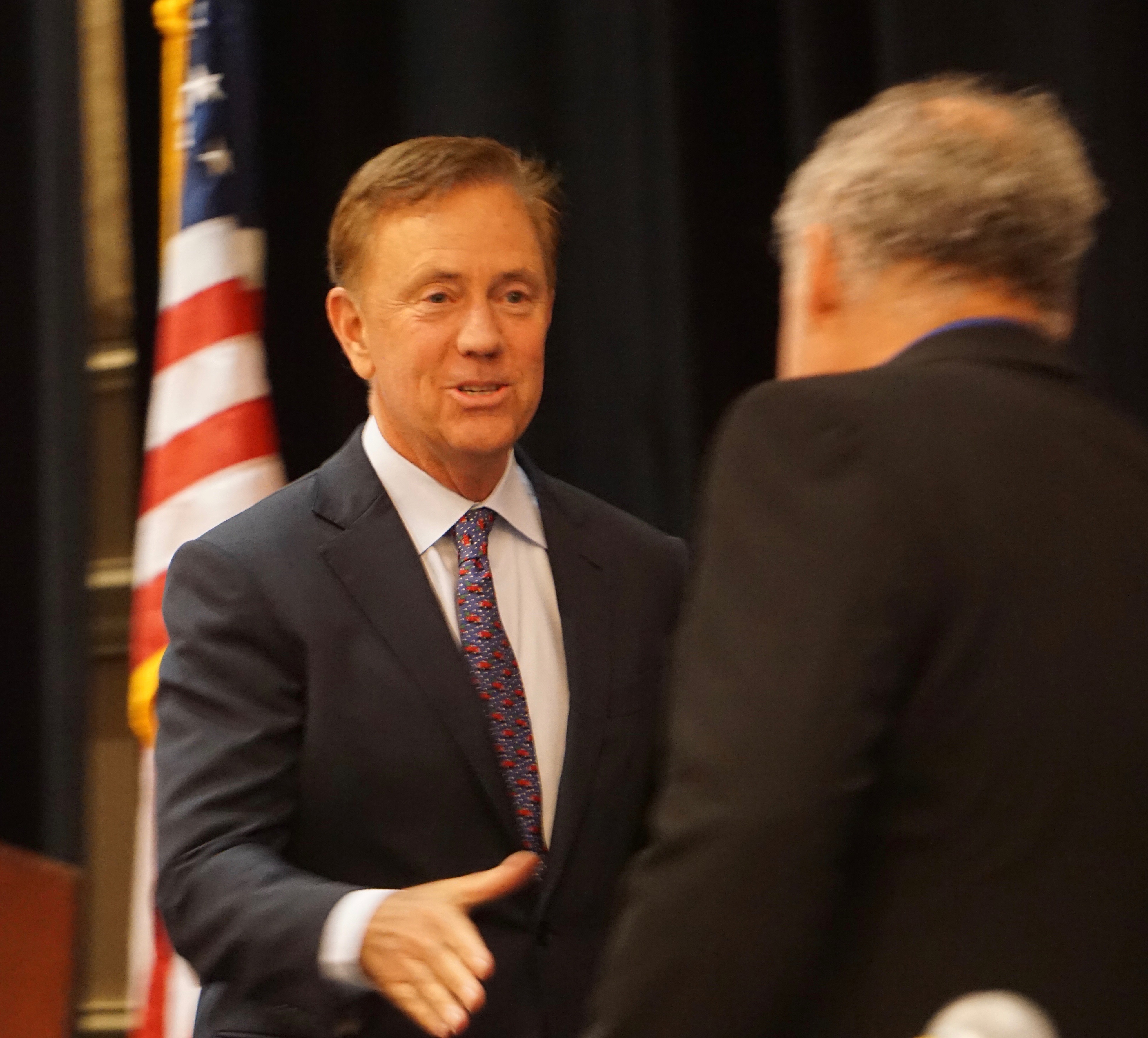 Gov. Ned Lamont is greeted by the AFL-CIO’s president, Sal Luciano, in October.

Needleman said he has not committed his vote, but he sees trucks-only tolls as preferable to a Republican alternative that would use most of the state’s budget reserves to pay down pension debt, freeing cash for debt service on transportation financing.

Labor’s ire has been directed mostly at the Senate Democrats, whose leader, Looney, sees automobile tolls as politically dangerous. He has had other differences with labor, but few as intense as this.

“I think Marty’s relationship with labor is probably one of the best relationships labor has ever had,” said House Speaker Joe Aresimowicz, D-Berlin. “He is a longtime labor supporter. It’s in his family background. On this particular issue, he was careful in thinking about the needs and wants of his caucus and trying to maintain that relationship.”

“You don’t want leaders of caucuses to be wholly owned subsidiaries. Where you disagree, you disagree.”

Speaker of the House Joe Aresimowicz

Aresimowicz, who has been an AFSCME employee longer than he has been a member of the part-time General Assembly, said periodic disagreements with labor allies is healthy and inevitable. In 2017, both Aresimowicz and Looney angered public-sector unions by agreeing to a bipartisan budget that required legislative votes on contracts and arbitration awards.

“I think it’s actually helpful on both sides. You don’t want leaders of caucuses to be wholly owned subsidiaries,” Aresimowicz said. “Where you disagree, you disagree.”

“It’s all part of the job, I think, dealing with different interests and different priorities,” Looney said. “The bulk of labor, their priority was paid family leave, the minimum wage and, for first responders, the PTSD bill. Those were all major achievements there.”

Looney said his caucus agrees with the building trades, the business community and the Lamont administration that transportation financing is a priority that must be addressed.

“We are working on delivering that.”