Vineyard Wind was one of three competitors for Connecticut’s largest offshore wind project.

In what is the single largest purchase of renewable power ever by the state, the Connecticut Department of Energy and Environmental Protection announced Thursday it has chosen Vineyard Wind to develop an 804-megawatt offshore wind project.

Once developed, the project will constitute roughly 14% of the state’s power needs.

“It also advances a major step toward Gov. Lamont’s goal of 100 percent zero carbon electricity supply by 2040,” she noted in a call with reporters. “As we address the urgent challenge of climate change, this selection demonstrates Connecticut’s leadership in advancing solutions at the scale that we need to help provide a solution to this global threat.”

The project award came not a moment too soon.

With federal tax credits set to expire at the end of the year, Connecticut and its offshore-wind-loving neighbors have been scrambling to authorize projects and, as such, benefit from the tax break that helps with financing. Congress has extended such tax credits many times, and House Democrats have proposed a five-year extension.

This was Connecticut’s first offshore-wind-only competitive process. Earlier offshore wind awards were part of procurements for renewable and carbon-free projects. In 2018, offshore wind managed a 200 megawatt win in the first award and another 100 megawatts award, as an addition to the first, later in the year. The two projects, known as Revolution Wind, are being developed by the partnership of the Danish company Orsted and Eversource.

“As we address the urgent challenge of climate change, this selection demonstrates Connecticut’s leadership in advancing solutions at the scale that we need to help provide a solution to this global threat.”

The 800 megawatts awarded to Vineyard Wind, which is a partnership of Copenhagen Infrastructure Partners and Avangrid Renewables, only constitutes about 40% of what Connecticut could have chosen. Under legislation passed last session, the state could have awarded as much as 2,000 megawatts. That’s slightly less than the combined power of the two plants in the Millstone Nuclear Station, which presently supplies about one-third of the state’s power.

The Vineyard Wind proposal, known as the Park City Wind Project, also includes a multi-billion dollar redevelopment of an 18-acre area at the port in Bridgeport to be used as staging for offshore wind.

According to Department of Economic and Community Development Commissioner David Lehman, that development would provide nearly $900 million in direct economic benefits.

“That includes buildout to the port, infrastructure, payrolls, construction, as well as operations and maintenance,” he said. The project is expected to create more than 2,000 direct jobs, though not all will be permanent, and an equal number of indirect and induced jobs.

“When we think about the future of the state’s economy, clean energy and renewables is a big component … So with this significant procurement, this is going to help set up that base,” Lehman said. 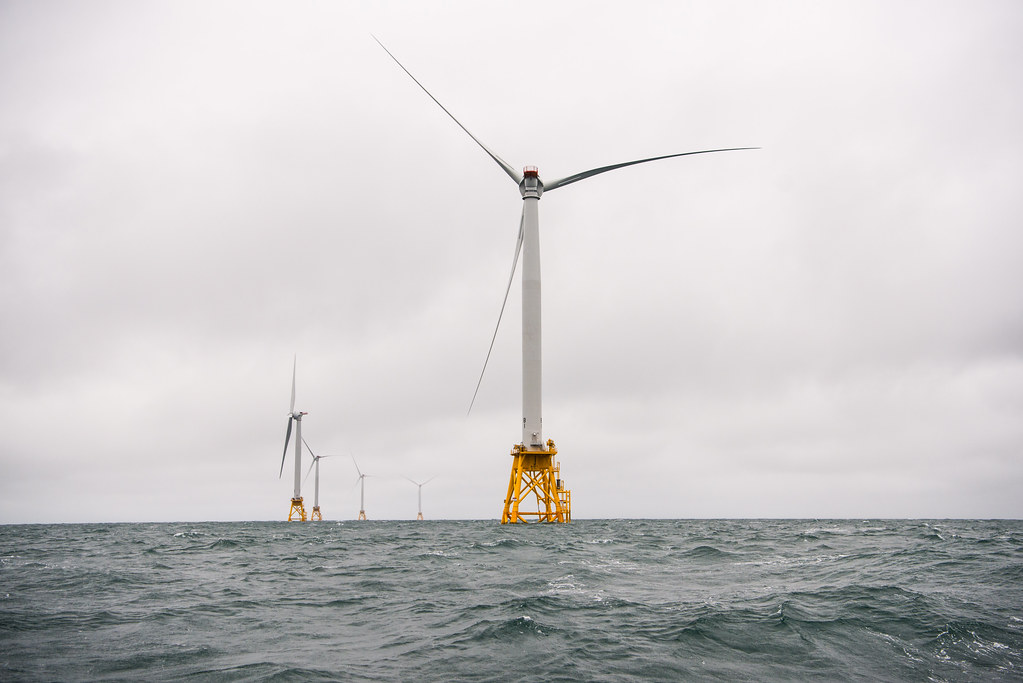 John Humphries, executive director of the Connecticut Roundtable on Climate and Jobs, has been advocating for large-scale procurement of offshore wind to both meet the state’s mandated climate goals and create local jobs. He called the choice of Park City Wind “a very exciting day for Connecticut’s workers and their communities.”

“In recent months, we have worked with Vineyard Wind to secure support for the apprenticeship readiness training provided by Building Pathways CT. This program specializes in preparing women, veterans and workers of color for careers in the construction trades, and we are enthusiastic about ensuring that offshore wind development provides an opportunity for local residents in Greater Bridgeport to gain access to these careers,” Humphries said in a statement.

The Revolution Wind project is also resulting in port redevelopment – in New London. The Orsted-Eversource group has committed tens of millions of dollars to a $93-million infrastructure upgrade to the State Pier that will accommodate offshore wind development and other uses. That group recently won a more-than-800 megawatt project in New York. It also bid on this Connecticut project.

The third bidder was Mayflower Wind – a joint project of Shell New Energies and EDP Renewables, which in October won an 800-megawatt project in Massachusetts, the state’s second such award.

Connecticut had also come under increasing pressure from environmental and renewable energy advocates, as well as legislators, to match the offshore wind mandates in most northeastern states.

That finally happened earlier this year when a mandate for up to 2,000 megawatts was approved and signed by Gov. Lamont. While Dykes has pointed out in the past that’s a higher percentage – one third of the state’s power needs – than other states, the can-you-top-this scramble for offshore wind has continued unrestrained.

New York has committed to developing 9,000 megawatts in offshore wind by 2035, with 1,700 megawatts already approved. Massachusetts has a 3,200-megawatt mandate, with 1,600 megawatts already under contract. And New Jersey recently upped its 3,500 megawatt-commitment to 7,500 by 2035 – about half the state’s power.

Maryland, Virginia and Rhode Island – home to the first and only commercial offshore wind operation in the U.S. –have also been active. The American Wind Energy Association recently estimated there is some 26,000 megawatts of offshore wind somewhere in the development pipeline off the northeastern U.S. and Great Lakes.

Offshore wind has been in use for decades in Europe, but has only recently come to the U.S. via a small, 6-turbine, 30-megawatt installation off Block Island. It is widely regarded as a way to meet renewable energy goals in the northeast where it can supply large amounts of power.

Vineyard Wind was the first developer to win a major grid-scale offshore wind contract in U.S. federal waters. But that project — Massachusetts’ first procurement last year, also for about 800 megawatts — has stalled.

The Bureau of Ocean Energy Management (BOEM – pronounced bome) in the U.S. Department of Interior, earlier this year delayed approval of the environmental impact statement (EIS). A new EIS could take well into 2020 to complete and is supposed to look at the cumulative impact of the many offshore wind projects now being planned off the east coast – some of which involve Connecticut. But it’s unclear whether the study would be specific to the Vineyard Wind project or if it constitutes a change in the Trump administration’s previously stated commitment to offshore wind.

Dykes did not directly respond to whether she is concerned the Connecticut Vineyard Wind project could stall out as well. She noted that prior to the start of the application period, a Commission on Environmental Standards in Connecticut had made recommendations on what should be considered related to the environmental and fishing concerns as the process moved forward.

“This project scored the highest in terms of its comparative plans for addressing environmental and fisheries mitigation,” Dykes said.

In a call with reporters, Lars Pedersen, CEO of Vineyard Wind, said the Connecticut project would be included in the cumulative impact study. “Once the programmatic review of offshore wind in a more general sense is concluded we would expect that some of the challenges we faced with the first project would have already been handled,” he said.

Charles Rothenberger, climate and energy attorney for Connecticut Fund for the Environment/Save the Sound, noted that the environmental mitigation details of the plan were not made public during the bid selection process.

“It will be important for the Commission on Environmental Standards to play an ongoing role in monitoring the project throughout the planning, construction, and operation stages to ensure the project meets the high expectations that Connecticut has set,” he said in a statement. “We will be watching closely how CT DEEP uses and enforces the Environmental and Fisheries Mitigation Recommendations, and how Vineyard Wind protects natural resources as they undertake this ambitious project.”

Vineyard Wind’s Pedersen said he expects port redevelopment to begin in 2021, with construction following in 2023. The project should then go online in 2025.