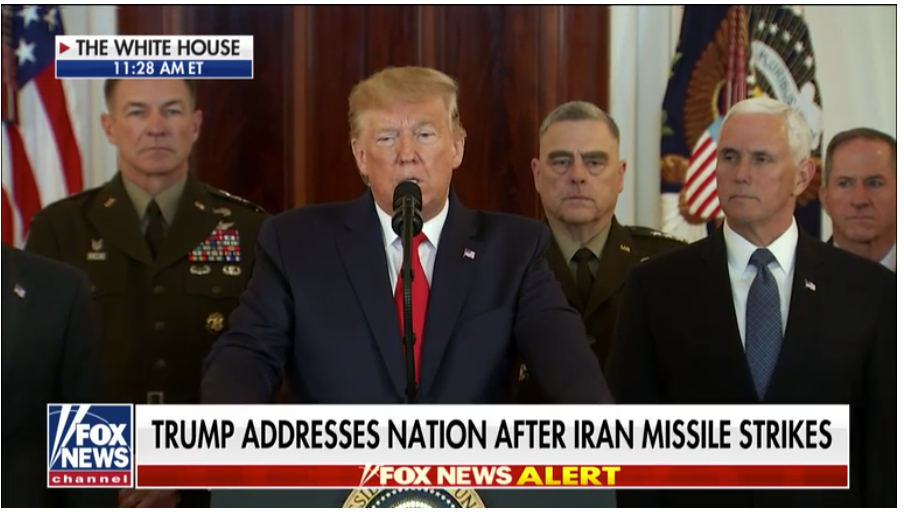 Washington – Despite classified briefings and an address by President Donald Trump on Wednesday, members of Connecticut’s Democratic congressional delegation remained critical of Trump’s handling of the Iran crisis and continued to voice concerns about an escalation in hostilities between the two nations.

“I would describe the reaction in the room as a letdown,” said Rep. Joe Courtney, D-2nd District, after a closed door meeting with administration officials.

Those officials, who fielded questions from lawmakers about last week’s airstrike that killed Iranian Gen. Qasem Soleimani, could not produce a “smoking gun” that would back the Trump administration’s argument that Soleimani was planning “imminent attacks” on Americans, Courtney said.

“There’s universal recognition that Soleimani was a malignant individual,” said Courtney, a member of the House Armed Services Committee.

But Courtney also said there was no explanation for why the U.S. “took swift action without consulting allies or Congress.”

“The bottom line is this — I did not hear evidence of a specific imminent threat that would allow an attack without congressional authorization,” said Sen. Chris Murphy, D-Conn. “With consequences as serious as these, that is unacceptable.”

Murphy went live on Twitter to discuss the briefing, saying he believes the actions the Trump administration has taken are “irreparable.”

“This is a disaster of epic proportions to U.S. national security interests,” the senator said.

Sen. Richard Blumenthal, D-Conn. said in a tweet “today’s classified briefing on Iran/Iraq was almost an insult to our intelligence.”

“I left with more questions than answers,” he said.

“We hope cooler heads prevail and we don’t descend into a cycle of escalation that would be devastating for the region and, perhaps, the world,” Himes said. “This is not about politics, but simply about preventing loss of life and destruction.”

Assessment of the closed-door briefings to members of the House and Senate split along party lines.

Rep. Mark Meadows, R-N.C., for instance, said the House briefing was “exhaustive in terms of the number of attacks and planned attacks that had been contemplated and why the need for action was necessary.”

Tensions between the United States and Iran, which were on the rise, escalated sharply after the U.S. airstrike last week that killed Soleimani. In response to the attack, Iranian forces launched more than a dozen ballistic missiles against two military bases in Iraq Tuesday night.

The next morning, Trump sought to reassure Americans, saying there were no casualties and Tehran “appears to be standing down.”

“The news that there were no U.S. or Iraq casualties from last night’s attack is welcome,” he said. “But little light has been shed on a real plan – with our allies – to de-escalate.”

In his White House address to the nation, Trump announced there would be new U.S. economic sanctions imposed on Iran and that he would ask NATO “to become much more involved in the Middle East process.”

“The American people should be extremely grateful and happy,” Trump said.

While Trump spoke of U.S. military strength, he also said “it does not mean we have to use it.”

The president said the United States and Iran could once again cooperate to fight a common enemy – ISIS.

And the president held open the possibility of talks over a new nuclear deal. Trump withdrew from a multinational agreement with Iran and on Wednesday urged other nations to abandon “the foolish Iran nuclear deal.”

While Republicans hailed the president’s speech as well as his actions, Democrats were critical.

“Now, the Trump administration has enabled Tehran to restart their nuclear program, turned the people of Iraq and Iran against us, brought about a halt to our counter-ISIS mission, and prompted Iraq to vote to eject all our troops from the country,” Murphy said. “In short, we are weaker, and Iran is stronger, because of Trump’s actions.”

Blumenthal said he hoped the president’s speech signaled “the beginning of a path to de-escalation and reduces the potential for military confrontation or war with Iran.”

“But there remains no overall diplomatic or military strategy,” Blumenthal said. “The ramifications and consequences of President Trump’s actions have made us less safe than we were five days ago.”

Iran’s strategy, according to foreign relations experts, is to force the United States to abandon the Middle East.

Like many Democrats, Himes on Wednesday called for Congress to vote on a war powers resolution.

“The language of the Constitution is plain,” Himes said in a speech on the House floor. “Congress shall have the power to declare war.”

Congress has not voted on an Authorization for Use of Military Force, or AUMF, since 2002. Trump says this resolution, approved in the wake of the 9-11 attacks, authorizes his use of military force.

House Democrats have crafted a new war powers resolution that would limit Trump’s options for unilateral military action against Iran.

House Speaker Nancy Pelosi said a vote on the resolution is scheduled for Thursday.