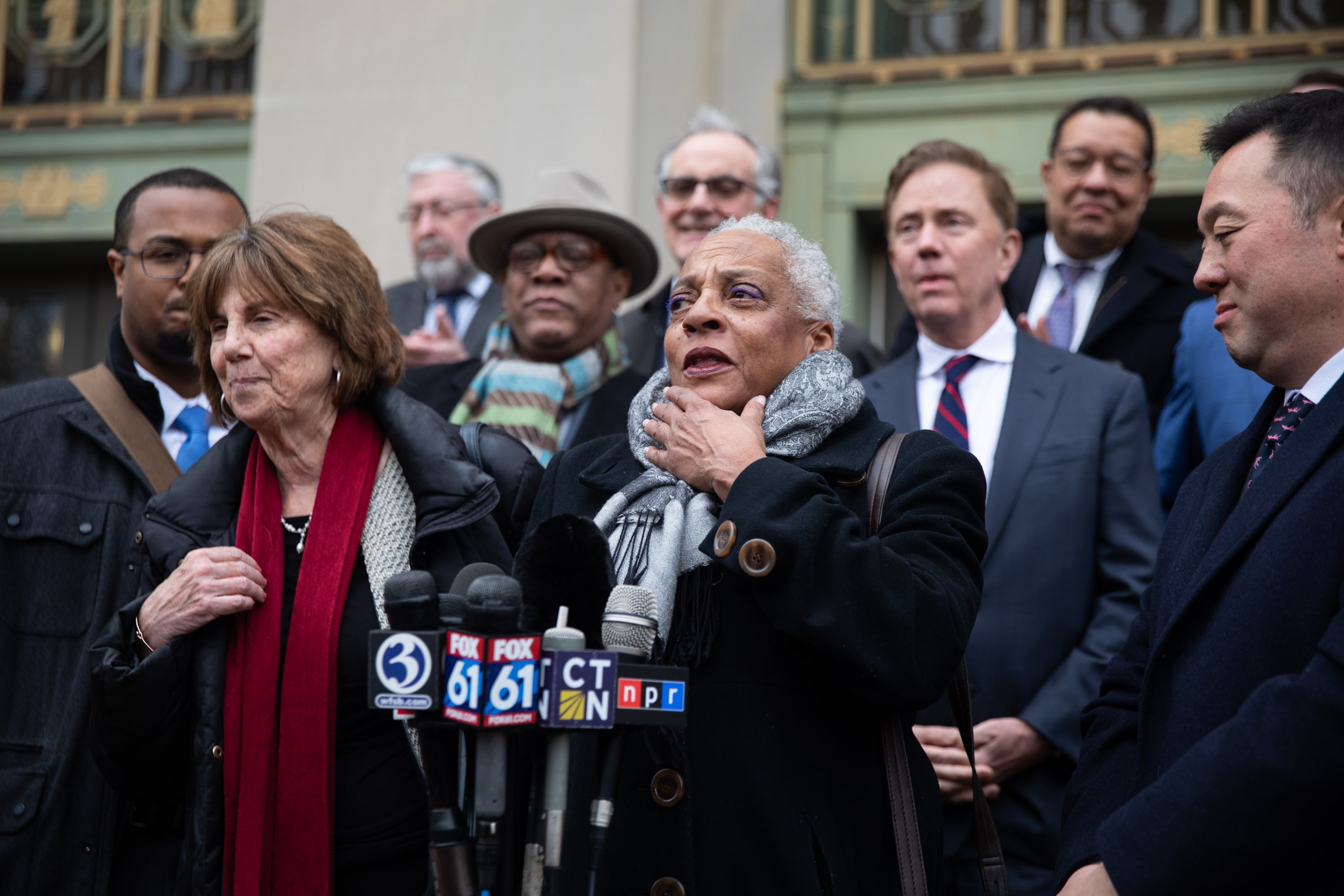 Elizabeth Horton Sheff speaks to reporters outside the courthouse Friday after reaching a settlement with the state in the school desegregation case. With her are Attorney Martha Stone, Gov. Ned Lamont and Attorney General William Tong.

State officials agreed Friday to enroll more than 1,000 new students in magnet schools as part of a milestone agreement in the decades-long Sheff vs. O’Neill school desegregation case. The agreement dedicates 600 of those seats to the more than 12,000 children who attend struggling, segregated schools in Hartford.

The agreement with civil rights attorneys also includes a commitment by the state to overhaul how it awards seats in magnet schools. That plan will address the backlog created when thousands of children were turned away from integrated schools and left on the waiting list each year.

The settlement follows six years of stagnation in the number of children from Hartford attending integrated schools – and almost 24 years after the Connecticut Supreme Court ruled that Hartford’s minority children, “suffer daily”  from inequities caused by severe racial and economic isolation.

Civil rights attorneys were prepared to drag the state back to court for not complying with the high courts’ order after efforts stalled under the administration of Gov. Dannel P. Malloy.

Under the administration of Gov. Ned Lamont and Attorney General William Tong, the civil rights attorneys were able to find middle ground.

“Look, this is a big deal. We’ve taken a big legal cloud off our shoulders, but that is no reason for us to slack off now. This is a wake up call,” Democratic Gov. Ned Lamont said during press conference outside the courthouse.

“We’ve taken a big legal cloud off our shoulders, but that is no reason for us to slack off now. This is a wake up call.”

While this settlement only affects Hartford-area schools, Lamont hinted he is considering ways to desegregate schools in other areas of the state. Turning to Elizabeth Horton Sheff – the Hartford parent who sued the state in 1989 – Lamont said, “You lit a fire and we are going to take this around the state.”

In the courtroom, Hartford Superior Court Judge Marshall Berger was pleased a path forward has been finally been forged.

“This is a great improvement,” he told the parties while picking up his pen to sign the 29-page agreement. “Certainly, it’s the children who win.” 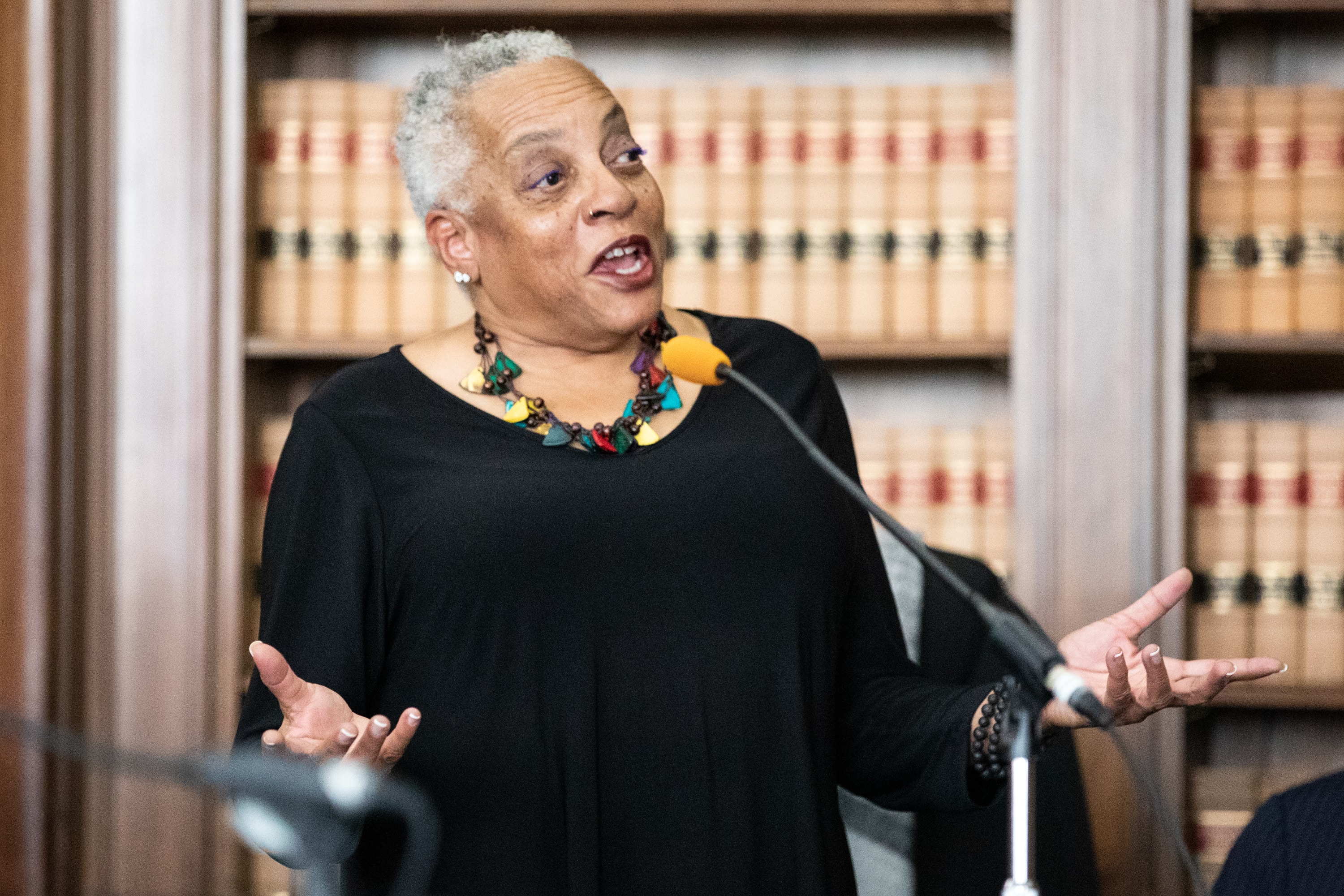 Elizabeth Horton Sheff addressed the court Friday. She is the original lead plaintiff in the case, which was filed in 1989.

The settlement is also expected to blunt challenges in federal court about the way the school choice lottery is administered. Parents suing the state in those cases believe the state’s lottery is enforcing discriminatory racial quotas because it is designed to limit black and Hispanic enrollment to 75 percent of a magnet school’s enrollment.

The Pacific Legal Foundation, which is representing the Hartford families in those cases and have argued against affirmative action in lawsuits across the country, did not respond to requests for comment Friday.

What’s in the settlement?

In addition to the 600 seats for Hartford children, 500 seats will also be made available for children from surrounding suburban  towns.

These seats will largely come from the creation of additional preschool classrooms at existing schools and a middle school opening at Goodwin College’s Riverside Magnet School in East Hartford, which has the space to offer additional grades.

Funding for the additional magnet seats and other efforts will come from a bucket of funding the state legislature and governor have already set aside for this settlement in the adopted state budget. The price tag is modest – less than $2.5 million – since no additional magnet schools will be constructed.

Funding will also be used to entice suburban school officials with declining enrollments to offer more Hartford residents a spot in their schools. Historically, suburban towns have not offered many seats to city students, with a common reason being cited that state reimbursement didn’t cover the cost to the district.

The parties also agreed to figure out a long-term path forward.

This school year, 3,481 of the 5,572 Hartford children who applied were offered a seat in a desegregated school – a 62% success rate. The settlement requires the state to figure out how to offer more opportunities for Hartford students to attend integrated schools.

“It’s one of the most significant pieces of this agreement,” said Martha Stone, one of the lead attorneys for the plaintiffs in the case and head of the Center for Children’s Advocacy. “It moves the needle forward.”

“It’s important that we remember there are real black and brown kids who benefit,” Ross said.