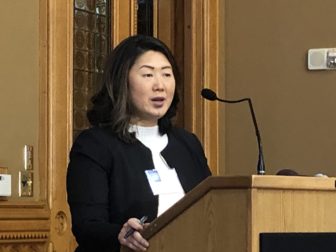 {Updated at 3:45 p.m. with comments from Gov. Ned Lamont’s administration.}

Connecticut Voices for Children, which unveiled its program at the Capitol during its 19th annual state budget forum, put itself at odds with Gov. Ned Lamont, who blocked an income tax surcharge last spring on the investment earnings of wealthy households.

The nonprofit policy think-tank, which has frequently weighed in on state finances since its founding in 1995, proposed two major state income tax relief efforts to pump $600 million annually into Connecticut’s middle class and working poor households.

To pay for this proposal, which would be revenue neutral to state government, Connecticut Voices recommended higher income tax rates on households earning more than $1 million annually — including a surcharge on investment income. It also recommended freezing the state’s tax on multi-million-dollar estates, which is scheduled to shrink over the next few years.

On the 91st anniversary of Martin Luther King Jr.’s birth, Emily Bryne, executive director of Connecticut Voices, opened the forum with a quote from King’s famous “The Other America” speech, given in 1968.

In one America, “millions of people have the milk of prosperity and the honey of equality flowing before them,” Byrne read. The other “has a daily ugliness about it that transforms the buoyancy of hope into the fatigue of despair.”

And as national trends toward greater income and wealth inequality intensify, Connecticut — with a regressive tax system that exacerbates this problem of winners and losers — moves closer to King’s image of America five decades ago, she said.

Income and wealth inequality already have taken a toll on education and health care for Connecticut’s children, as well as their future employment potential, Connecticut Voices analysts said.

The national differences in income among economic classes is the most pronounced since 1945, said analyst Patrick R. O’Brien — though some economists argue it’s reached a gap unmatched since the stock market crash of 1929. 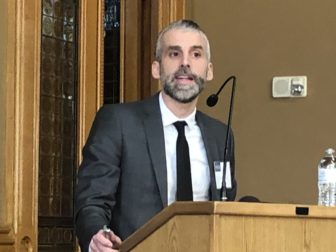 The top 1% alone watched their share grow during this period from 11% to 20% of all income.

Wealth, which takes into account stocks, other investment holdings, property and debt, is even more concentrated at the top than income is, O’Brien said.

The top 1% of America’s households held 42% of the nation’s wealth in 2012, nearly twice what the bottom 90% of the country held collectively, he said.

And in Connecticut the disparities are worse.

That’s largely due to a heavy reliance on municipal property taxes and on state sales and business taxes. These levies either are largely regressive — meaning the rates are the same regardless of the taxpayers’ wealth — or, in the case of business taxes, the burdens mostly can be transferred onto consumers.

The working poor in Connecticut pay nearly one-quarter of their income to cover state and local taxes — or business taxes shifted onto their households. By comparison, the middle-class pay about 13%, while the top 10% of earners pay 10% and the top 1% pay almost 7.5%.

O’Brien said “the truly extreme [tax] policy in Connecticut is the status quo.”

Despite Connecticut’s perception as a high-tax state, it ranks in the middle when a state’s tax burden is compared with its residents’ incomes and overall ability to pay. 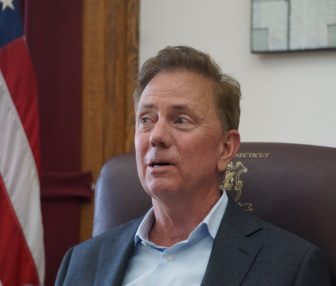 Two additional percentage points would be added to capital gains and other non-wage income from these wealthy households.

Connecticut Voices also recommended freezing the estate tax, which currently is aimed at estates valued at greater than $3.6 million. Legislators already have approved plans to lower the tax and increase the number of estates that are exempted.

All of these moves combined would raise $600 million per year.

The nonprofit group then recommends these funds be returned to poor and middle-income households in two ways.

The group also recommends Connecticut adopt a state Child Tax Credit patterned after a federal credit. The state credit would be equal to between 30% and 40% of the federal credit.

Connecticut Voices analysts estimate expanding the earned income credit could add as much as $700 to $850 per year to poor households.

And creation of a new Child Tax Credit could provide poor and middle-income residents — even those earning nearly $500,000 per year — as much as $800 to $1,550 on each filer’s annual refund.

“The child tax credit has been found to have staggering impacts on poverty reduction,” said Meg Wiehe, deputy executive director for the Institute on Taxation and Economic Policy — who also worked on the Connecticut Voices’ proposal.

And according Wiehe, the state’s wealthiest households would lose slightly less than 1% of their annual earnings. 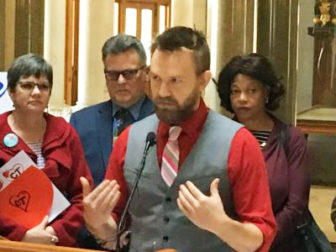 But Lamont, many fellow Democrats from Connecticut’s affluent Fairfield County, and the legislature’s Republican minority, all insist the state is losing wealthy residents to migration, and must avoid a tax hike on this group.

The governor blocked a proposal from the Democrat-controlled Finance, Revenue and Bonding Committee last spring to raise $260 million per year from households making more than $500,000 annually. The panel had suggested an income tax surcharge on these households’ capital gains and other investment earnings.

But the Connecticut Voices plan would rely on investment-related income tax receipts that traditionally have proven highly volatile. This would be “an unnecessary brake on our economy and create more budget uncertainty.”

“The idea that tax redistriubiton would scare away the wealthy is completely inaccurate,” said Rep. Josh Elliott, D-Hamden, a member of the House Democratic Progressive Caucus. “We’ve been seeing people in Connecticut getting wealthier and wealthier at the top of the income scale.”

Elliott added that Lamont “believes taxing the wealthy is akin to punishing success” and that any proposal similar to the plan outlined by Connecticut Voices “will have a hard time. But the argument will not stop. I’m going to keep fighting for it. The caucus is going to keep fight for it.”