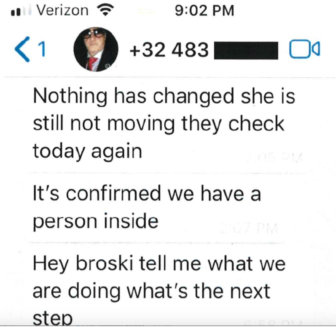 A portion of the texts from an unknown person communicating with Hyde about Yovanovitch.

Washington — The House Intelligence Committee late Friday released a trove of new material containing additional texts from Connecticut congressional candidate Robert Hyde that suggest he was communicating with someone who was monitoring the U.S. ambassador to Ukraine before she was removed by President Donald Trump.

The new documents include several screenshots sent by Hyde to Lev Parnas, a former associate of Trump lawyer Rudy Giuliani, that appear to reflect communications between Hyde and an unknown telephone number with a Belgium country code. The information provided by this foreign number then appears in separate text messages that Hyde relayed to Parnas about former Ambassador Marie Yovanovitch’s movements and activities:

Unknown number:  [After sending a link containing a photo of Yovanovitch] “My contacts are checking”

Unknown number :  [After sending what appears to be a street address in Ukrainian] “She been there since Thursday never left the embassy”

Unknown number: “Nothing has changed she is still not moving they checked today again”

Unknown number:  “It’s confirmed we have a person inside”

Unknown number:  “She had visitors”

Unknown number:  “Hey brother do we stand down??? Or you still need intel be safe”

The House Intelligence Committee turned the texts and other materials over to the Judiciary panel to include it in the record to be sent to the Senate, which is expected to begin its trial of Trump in earnest on Tuesday.

“The fact that he was speaking to a third party makes this more serious than if he is sitting at home toying with Parnas,” said Rep. Jim Himes, D-4th District, a senior member of the intelligence panel.

The texts from the unknown number were released a few hours after Hyde, in a rambling video posted on social media Friday, demanded House Intelligence Committee Adam Schiff release texts that would prove he was receiving intelligence from someone and forwarding that information to Parnas.

“Who was I talking to, that was providing me this intel? Ask him. C’mon Adam Schiff,” he said.

Secretary of State Mike Pompeo on Friday said he will investigate whether Yovanovitch was surveilled. Pompeo’s announcement comes a full three days after the initial release of documents concerning the communication between Parnas and Hyde.

Pompeo’s announcement, in an interview with conservative radio host Tony Katz, also came a day after the Ukrainian government announced it was looking into the possibility Yovanovitch was being watched. Giuliani considered the former ambassador an obstacle to the administration’s efforts to press Kiev to investigate Joe Biden, whose son Hunter had been a board member of an Ukrainian gas company.

Hyde’s texts are among a trove of information Parnas is giving the  House Intelligence Committee in response to a subpoena. On Tuesday, dozens of  WhatsApp messages from Hyde to Parnas about the surveillance and removal of Yovanovitch from her post in Kiev were released.

“We will do everything we need to do to evaluate whether there was something that took place there,” Pompeo told Katz. “I suspect that much of what’s been reported will ultimately prove wrong. But our obligation, my obligation as Secretary of State, is to make sure that we evaluate, investigate.  Any time there is someone who posits that there may have been a risk to one of our officers, we’ll obviously do that.”

Pompeo also said he has “not met this guy Lev Parnas, to the best of my knowledge.”

Pompeo made these statements after Rep. Eliot Engel, D-N.Y., the head of the House Foreign Affairs Committee, demanded the State Department investigate whether Yovanovitch had been spied upon. Engel called Hyde’s texts “very disturbing.”

Himes said Pompeo “has allowed this behavior against his diplomats without defending them.”

The FBI is also investigating the matter. Agents were at Hyde’s home this week in the Weatogue section of Simsbury before going to Hyde’s business in nearby Avon, where Hyde runs both his landscaping company and his campaign headquarters.

“The good news is that the FBI is looking at this,” Himes said.

Hyde maintains his texts to Parnas were a joke. 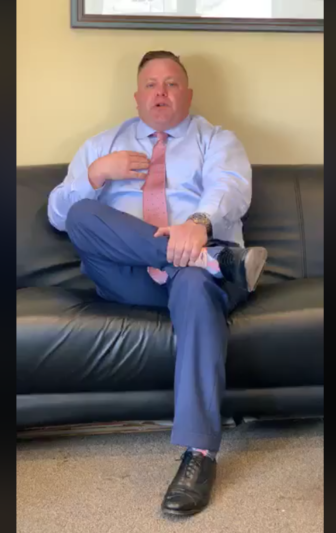 Robert Hyde recorded a video Friday rebutting the idea that he was monitoring the former ambassador.

In  the video he released on social media Friday afternoon, Hyde said he was just “fooling around” with Parnas.

“I am a landscaper from Simsbury who was just trying to get into the government relations, public relations world, lobbying world, whatever you call it,” he said.

In the rambling and expletive-laced video, Hyde said he sent the texts from Ecuador, where he was “climbing volcanoes.”

He also wrathfully attacked Schiff, who besides leading the House impeachment inquiry is the leader of the seven House Democrats serving as impeachment managers at Trump’s trial on charges of abuse of power and contempt of Congress stemming from the Ukraine scandal. The impeachment trial is scheduled to begin Tuesday.