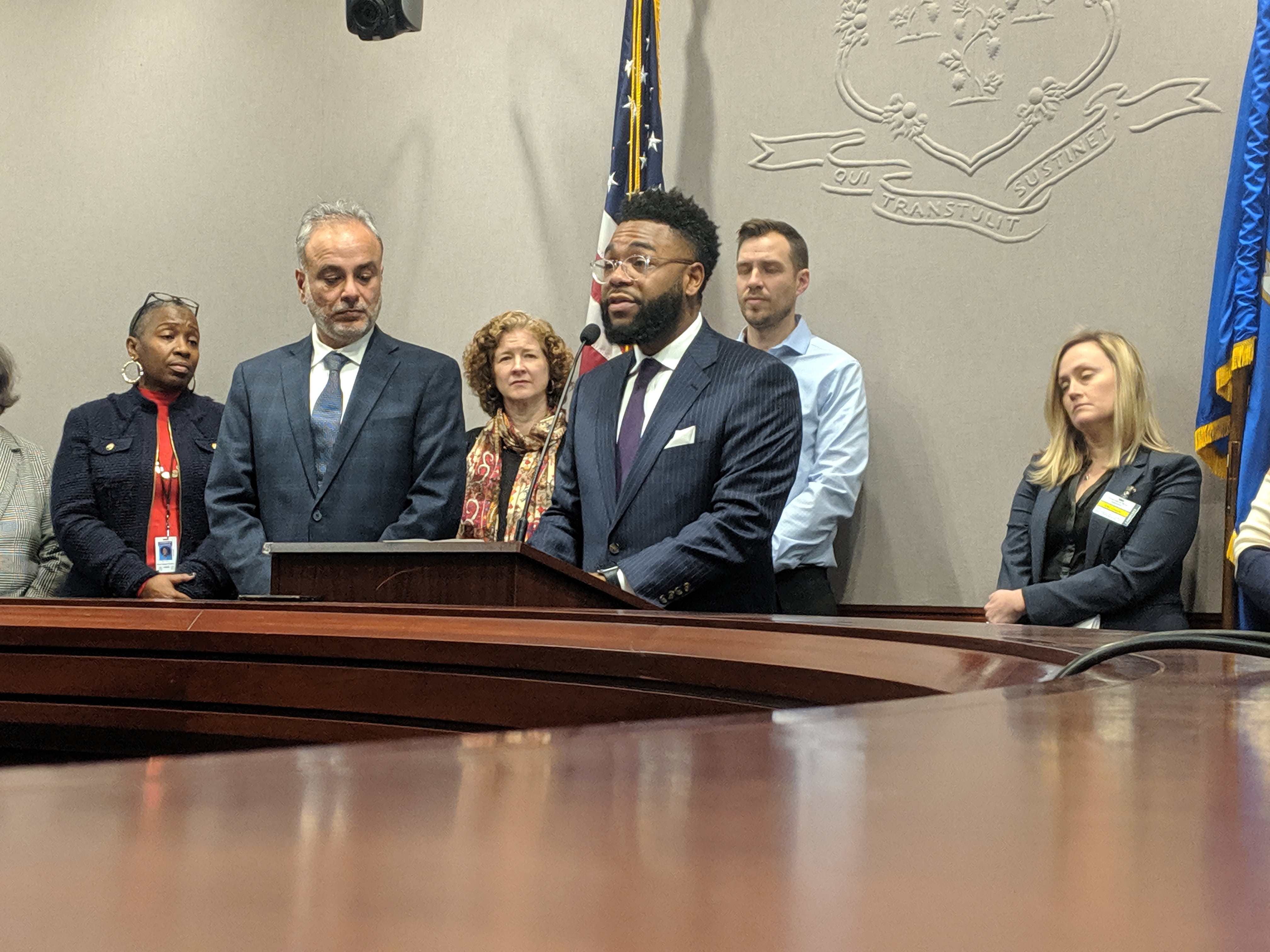 State Rep. Brandon McGee and Sen. Saud Anwar propose a ‘Right to Housing’ while surrounded by advocates and other legislators

On any given day, some 3,000 people are homeless in Connecticut. With that number in mind, legislators and advocates Monday rallied around housing reforms – dubbed “Right to Housing” changes – to reduce homelessness, bring down housing costs and confront housing segregation.

It’s an effort to ensure that every resident has access to housing in one of the most expensive places in the country to live.

“We as a state have reached a point that we need to declare that we need to aspire to be a ‘Right to Housing’ state,” said State Sen. Saud Anwar, D-South Windsor. “We are a segregated state. Look at the numbers. Those numbers are not sustainable for any community – any state – and we as the state of Connecticut have allowed it to happen.”

“We’re definitely going to be pushing forward with the Right to Housing Agenda,” added State Rep. Brandon McGee, D-Hartford. He and Anwar are chairmen of the legislature’s Housing Committee.

Their remarks came during a midday press conference at the State Capitol complex, and were applauded by housing advocates and the mayor of Hartford, who surrounded them as they announced their agenda for the legislative session that begins next week.

“Everybody deserves a safe, stable place to call home.”

“Everybody deserves a safe, stable place to call home, or a right to housing,” said Kiley Gosselin, the executive director of the Partnership for Strong Communities, an advocacy group that lobbies for housing reforms.

“Right to Housing” is not a new concept worldwide – France, Scotland and South Africa have such protections in place, according to the National Law Center on Homelessness & Poverty. But Connecticut, which has some of the most expensive housing stock in the nation, is one of the first states to consider such a push.

Specifics of what that agenda will look like are a work in progress. But initiatives embraced Monday by the Democratic legislators include making it easier for lower-income residents to purchase homes, putting tenant protections in place to reduce eviction rates, building more affordable housing and making some state aid contingent on well-off communities allowing more affordable housing construction.

Lawmakers also called for more robust mobility counseling, which helps people searching for housing to overcome discrimination or limited housing options in communities where they hope to move.

Over the past year, CT Mirror and ProPublica have investigated the lengths wealthy towns have gone to block affordable housing – and, by extension, the people who need it. These exclusionary zoning requirements have rendered Connecticut one of the most segregated states in the nation.

The stories also examine how the state and federal government are funneling money to build housing for the poor to already-impoverished neighborhoods, and how the concentration of affordable housing in high-poverty neighborhoods results in Section 8 voucher holders being marooned there. 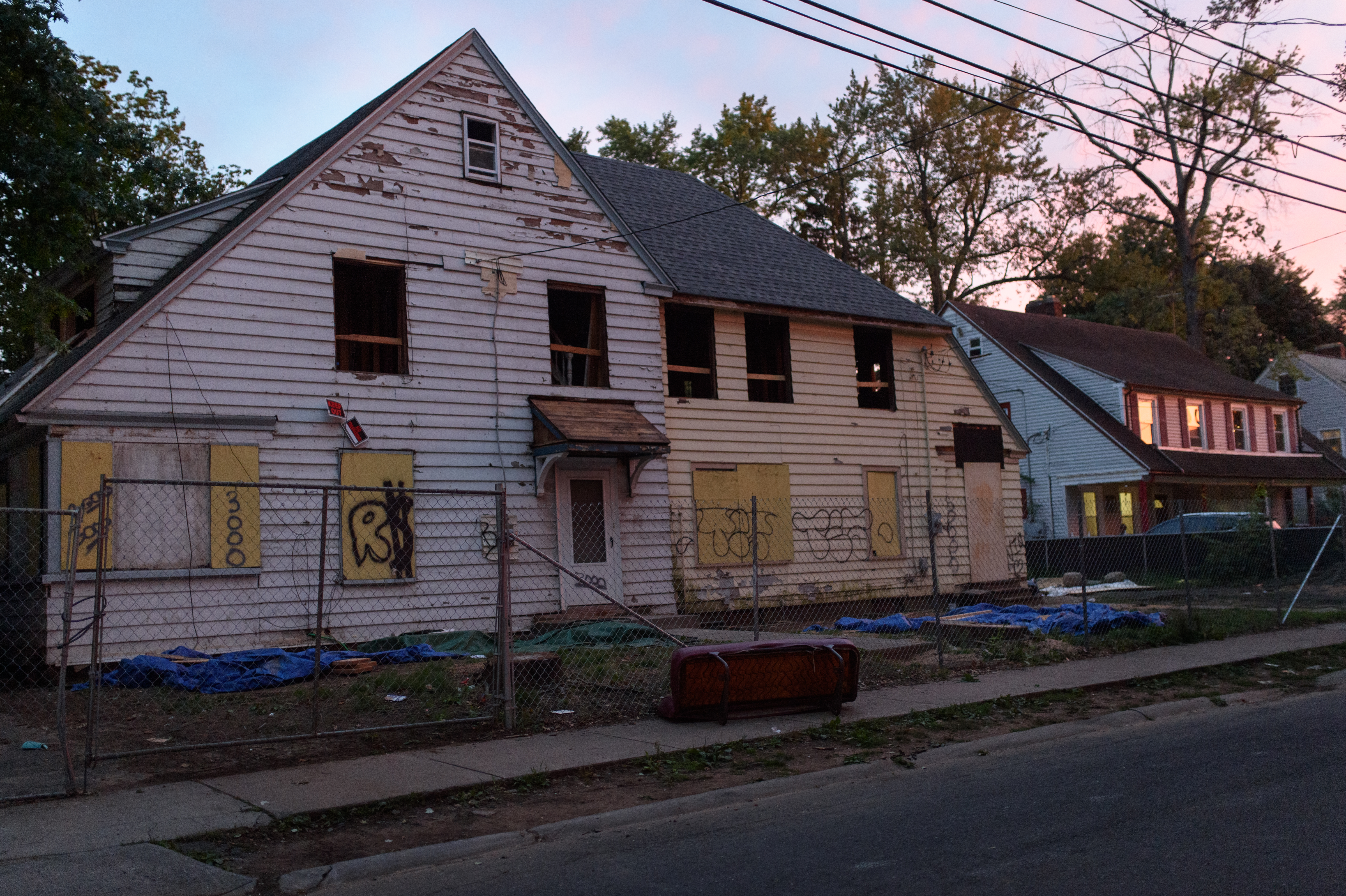 An abandoned house on Allendale Road in the Behind-the-Rocks neighborhood of Hartford.

“In order to address housing [segregation], we need housing,” said Anwar, calling it a “no-brainer” solution.

Democrats hold strong majorities in both chambers of the General Assembly, and so McGee and Anwar, both Democrats, will get to set that agenda.

The chairs of the Housing Committee on Monday called the governor’s approach a decent one, but not enough by itself.

“It’s a step in the right direction,” said Anwar. “We appreciate his leadership, but we want more.” Last year, the governor didn’t propose any new funds dedicated to building affordable housing.

It’s clear that tackling housing segregation and quality is a priority for officials this session, an emphasis applauded by Hartford Mayor Luke Bronin. Thirty-nine percent of the housing stock in Hartford is reserved for low-income residents, a dynamic that hinders the city’s ability to raise revenue from property taxes to fund things like schools, sidewalk repairs and trash pickup.

“For far too long in this state, that responsibility of providing affordable housing has been borne by a very small number of communities.”

“We have to acknowledge the housing quality crisis that we have in many of our communities,” Bronin said. “We have to recognize that there is a wealth of research out there that shows the best way to combat poverty is to create economically diverse communities. The reality is that for far too long in this state, that responsibility of providing affordable housing has been borne by a very small number of communities. Here in Hartford, we’re proud to do that, because it is needed. But it shouldn’t be just a handful of communities. … This should be a shared responsibility.”

Anwar agreed, saying that critical to passing  a “Right to Housing” agenda is to remind people just how segregated this state is.

“When you have those conversations and you hear people who are using excuses to continue to have segregation: rise up, wake, call them out. Because the status quo is not sustainable,” he said.