Barbara Dalio makes a point at second meeting of the Partnership for Connecticut. At left is Gov. Ned Lamont, a member of the private public partnership board, and Erik Clemons, chairman of the board.

A proposal to pay the leader of Connecticut’s new education partnership more than $300,000 has created a division on the board and raised new questions about the program’s exemption from disclosure and ethics rules.

Three of the four legislative leaders who serve on the Partnership for Connecticut board are questioning whether the organization’s president should make more than many school superintendents — especially since the salary will be paid with a combination of public and private funds.

“I would find that problematic,” said Senate President Pro Tem Martin M. Looney, D-New Haven, adding that advocates for such compensation would need to present “a very compelling case” to win his support.

The controversial salary proposal has also prompted Senate Minority Leader Len Fasano — a member of the partnership board who originally defended the privacy arrangements — to ask whether special privacy protections granted by lawmakers last spring should remain in place.

Fasano questioned whether the unconventional partnership between the state and hedge fund giant Ray Dalio’s philanthropic arm would even consider paying its leader this much if it weren’t exempt from the disclosure and ethics rules applied to other public agencies and commissions.

“I’m starting to have significant concerns over the fundamental aspects of how and why we’re doing this partnership,” Fasano told the CT Mirror. “Perhaps we should rethink this. I’m willing to have further discussions, but I’m feeling a little dubious about where we are.”

“I’m starting to have significant concerns over the fundamental aspects of how and why we’re doing this partnership.”

Fasano did not suggest Connecticut dissolve its partnership with Dalio Philanthropies.

But the Senate GOP leader, who originally was comfortable with most of the privacy arrangements, now joins House Minority Leader Themis Klarides, R-Derby, who protested the special status from the beginning last June.

Dalio and his wife, Barbara, took an unprecedented step in private philanthropy in Connecticut last April when they pledged to contribute $100 million over five years to help students in low-performing districts. The couple already had invested in school programs in several poor Connecticut communities, earning praise from state and municipal officials as well as educators.

Connecticut signed up to match the donation with a $100 million in taxpayer funds  and also help the Dalio’s foundation raise donations from other philanthropic groups to support this effort. Representatives of the state and Dalio Philanthropies agreed to meet jointly to decide which programs and communities would receive aid.

But when legislators voted to approve the initiative last June, they were asked by Lamont — on behalf of the Dalios — to include one additional unconventional proposal: to exempt the partnership from state disclosure and ethics rules.

Though the Democrat-controlled legislature agreed to the request, minority Republicans in the House immediately objected.

“Ever since the issue came up with the budget last spring, it is clear what direction it has gone in, that there is a problem. There is state money involved here. End of story.”

Ray Dalio, who leads the world’s largest hedge fund — the Westport-based Bridgewater Associates — has a net worth, according to Forbes, of $18.4 billion.

Dalio Philanthropies’ pitch for the exemption centered on the argument that Connecticut’s school system has been failing too many students for years, and that private talks might lead to greater candor in the search for solutions.

When asked about this last summer, Fasano generally was supportive of that approach, though he did qualify that budget matters should be resolved in open session.

He [Ray Dalio] doesn’t believe in idle time,” Fasano told the CT Mirror last August. “He believes people who are decision-makers need to get together.” 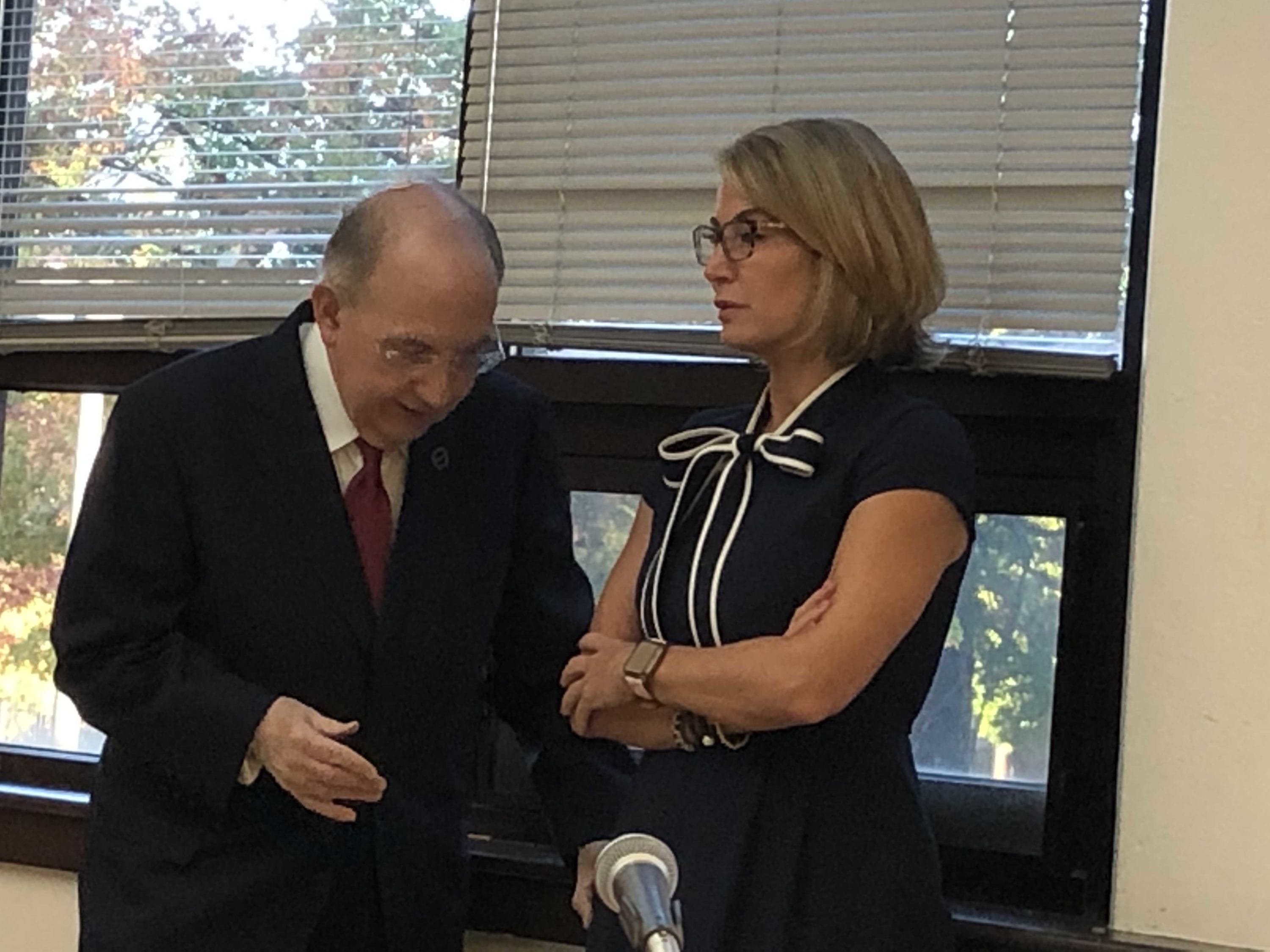 Klarides noted last summer that five state officials — Lamont and four legislative leaders — would be serving on the partnership’s oversight board, and asked Attorney General William Tong whether she would be barred from making partnership documents available to the public.

“Everything is supposed to be done in the light of day,” Klarides said last summer. “I don’t know what happens if a publicly elected official has a fiduciary responsibility to this nonprofit corporation.”

Tong agreed and issued an opinion in August saying elected officials serving on the partnership board still would be subject to Connecticut’s Freedom of Information Act.

This, in turn, prompted Dalio Philanthropies to suggest forming a working subcommittee of the oversight board that would handle most of its responsibilities — and not include any elected state officials.

Legislative leaders from both parties objected and blocked that idea.

The full partnership board began meeting in October, and the majority of that first session was held behind closed doors.

“Ever since the issue came up with the budget last spring, it is clear what direction it has gone in, that there is a problem,” Klarides said Thursday about the privacy issue, adding that transparency must be assured. “There is state money involved here. End of story.”

How much should the partnership president earn?

One of the panel’s first tasks is to select a president. A search committee formed this past winter has whittled a field of 261 candidates down to two finalists. A selection is expected in early March.

The board budgeted $247,500 in December as “anticipated annual compensation” for the president. But Fasano, Klarides and Looney all say they’re now being asked by others within the partnership to authorize a higher salary. Although none of the leaders specified a number, sources said the new salary would exceed $300,000.

More importantly, according to Looney, Klarides and Fasano, higher pay would elevate the partnership president’s compensation equal to — or greater than — that of the school superintendents in Connecticut’s largest cities.

Klarides said Wednesday that the $247,500 level targeted in December “is within the range that I think is reasonable.”

Legislative leaders noted that the $247,500 figure was already something of a compromise.

On the one hand, many Connecticut superintendents oversee sizable budgets, manage districts with hundreds of teachers, administrators and other staff, and must ensure that curriculum development, staff evaluation, building, ground maintenance and financial management all proceed properly.

In Bridgeport, Connecticut’s largest city, Superintendent Michael Testani, oversees annual education expenditures in excess of $300 million, according to the state Office of Policy and Management’s Municipal Fiscal Indicators report. He earns $244,000 per year.

Communities with budgets similar to that of the partnership, such as Wethersfield and Avon, pay their superintendents $185,000 and $220,000, respectively.

“I was always concerned over that number,” Fasano said of the $247,500 target figure, “but I felt that number was the absolute top we should go unless we were given some super extraordinary candidate.”

Looney, Klarides and Fasano all acknowledged that because the partnership anticipated some former superintendents would apply for the president’s post they wanted to offer competitive pay that would attract good candidates.

But there’s another side to the argument as well.

The partnership president also would oversee fundraising efforts that don’t fall to school superintendents. One of the goals set by Dalio Philanthropies and state officials when the partnership was launched was to find other private groups that would help expand a $40 million-per-year grant program into $60 million.

A benchmarking study completed by the partnership’s search firm also examined pay for leaders of various fundraising groups. The executives for community foundations typically earn between $277,000 and $330,000 per year, while those who lead “comparable charitable organizations make between $254,000 and $491,000.

“The potential salary is significant, but it’s also in the range of school superintendents and comparable non-profit and foundation leaders.

“It’s critical that we find the right person for this job because we believe Connecticut can and must do better for its disconnected youth,” said Erik Clemons, chairman of the partnership’s Board of Directors. “That requires the best leadership and I’m confident we will agree on the selection of the partnership’s CEO and a salary near the initially approved placeholder of $247,500 in time for the next meeting.”

House Speaker Joe Aresimowicz, D-Berlin, who also serves on the partnership board, was more flexible than other legislative leaders about raising the salary, and said Fasano’s call to revisit the partnership’s rules was based on partisan politics — and not out of a concern for education.

“The initial budget appeared adequate, but the partnership did a fully transparent market analysis of comparable positions,” the speaker said. “It seems like if Senator Fasano is not trying to score political points or bad mouthing Connecticut, he’s not interested. For me, the mission remains important and should move forward.”

Max Reiss, the governor’s communications director, said Lamont “is absolutely comfortable with that [$247,500 salary] level,” but didn’t say whether the governor would go higher.