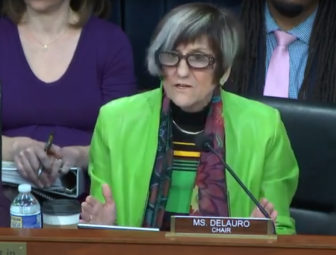 Washington – The coronavirus crisis has bolstered U.S. Rep. Rosa DeLauro’s effort to secure paid sick leave for all Americans, including low-wage workers who can’t afford to stay home when they are sick.

On Monday, DeLauro, D-3rd District, and several of her Democratic House colleagues introduced a bill which would allow workers to gradually earn seven days of sick leave a year and grant them an immediate 14 days of paid leave if there is a national health emergency.

“For many workers, staying home from work means losing your paycheck or losing your job,” said DeLauro.

The Centers for Disease Control and Prevention has prescribed “everyday preventive actions” to stem the spread of COVID-19, including staying home when sick.

“The CDC’s prescription is one few families can afford,” DeLauro said.

The BLS also determined that only 58% of workers in service occupations, who have frequent contact with the public, had access to paid sick leave in 2019, compared to 90% of workers in management, professional and related occupations.

DeLauro said her legislation would allow parents paid leave when children are home because schools are closed, when their workplace is closed or when they are quarantined.

Sen. Patty Murray, D-Wash., whose state has so far experienced the most deaths in the U.S. from coronavirus, is the sponsor of the paid leave legislation in the Senate.

In Connecticut, certain employers with 50 or more workers are currently required to provide 40 hours of paid sick leave each year. Gov. Ned Lamont signed a new paid family medical leave law last June that provides up to 12 weeks of replacement wages. The new law, which takes effect Jan. 1, 2022, will apply to any employer with even one employee.

Businesses, and their GOP allies, have long opposed DeLauro’s quest for a federal paid family leave law, and the 51 sponsors of the “Paid Sick Days for Public Health Emergencies and Personal and Family Care Act” are all Democrats.

DeLauro said she is “optimistic” about Republican support, citing the bipartisan votes on the federal $8.3 billion coronavirus spending bill.

“There are no partisan issues about public health,” she said.

White House advisers on Monday plan to present Trump with a list of policy changes to blunt the impact of coronavirus,  including paid sick leave and emergency help for small businesses.

Oppostion to DeLauro’s bill could also dissipate if Congress decides to adjourn because of the coronavirus, or if a number of lawmakers choose to self-quarantine while they are paid their salaries by taxpayers.

Over the weekend ,two Republican lawmakers — Sen. Ted Cruz of Texas and Rep. Paul Gosar of Arizona — said they would not return to work in Washington D.C. this week and are self-isolating at home.

Gosar said three of his staffers are also under quarantine and he has shut down his congressional offices for the week.

Both Cruz and Gosar said they had interactions with an individual who has tested positive for coronavirus at the recent  Conservative Political Action Conference in Washington D.C.

On Monday afternoon, Rep. Doug Collins, R-Ga., also said he is under self-quarantine because  he had contact with the infected individual at the CPAC conference.  So did Rep. Matt Gaetz, R-Fla, who was also at the event.  Gaetz last week tweeted a picture of himself wearing a gas mask on the House floor.

Seven Trinity College students who also attended the CPAC convention are in self-isolation on Monday. The school said none of them have any symptoms of the virus.