Legislating in the age of COVID-19: vote by phone, no public hearings

Measures are temporary. Unresolved is whether the 2020 session will end early. 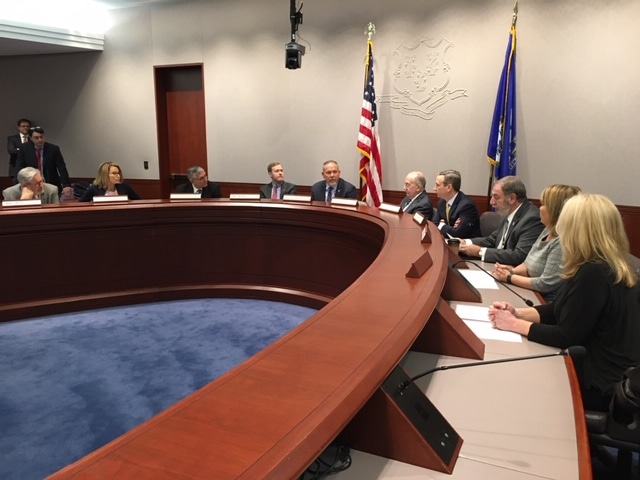 The first and last meeting of the Declaration of Public Health Emergency Review Committee.

Connecticut legislative leaders Wednesday endorsed the governor’s declaration of a public health emergency to slow the spread of the coronavirus, then turned to a question even closer to home: How will the General Assembly continue its 2020 session?

Legislators canceled all public hearings scheduled for next week and revised their rules to allow committee votes by telephone, leaving unanswered the broader question of how they might continue the public’s business if the public cannot come to the State Capitol.

Technically, the awkwardly named Declaration of Public Health Emergency Review Committee, a 10-legislator panel composed of the Senate president pro tem, the House speaker, the majority and minority leaders, and the co-chairs and ranking members of the Public Health Committee, had no need to meet unless lawmakers wished to block the declaration. But members said they convened to set a precedent and underscore that the governor has bipartisan legislative support.

“This is uncharted territory for us all.”

“There are plenty of partisan things to do in this building. This is not one of them,” said House Minority Leader Themis Klarides, R-Derby. “We just want to make sure we’re properly balancing public health and keeping government running.”

“This is uncharted territory for us all,” Senate President Pro Tem Martin M. Looney, D-New Haven, said as the panel convened for its only planned meeting.

House Majority Leader Matt Ritter, D-Hartford, compared the legislature’s protocol to one many Connecticut school officials have used when deciding whether to impose new restrictions or close altogether. If a staffer contracts an unusual virus, and if it can be linked to their presence at the school, then further steps to limit overall school activity may be needed, he said.

“I think the General Assembly is in the same boat,” Ritter said. “As long as there is no sort of connection along that continuum, we feel like we’re going to have to do some stuff. But clearly we’re trying to thread the needle as delicately as possible. … I think today was a good first step.”

Connecticut is moving aggressively to slow the spread of COVID-19, a novel coronavirus at the center of an outbreak in neighboring Westchester County, N.Y. Connecticut had three confirmed cases at mid-afternoon Wednesday, but modeling of epidemics indicate a typical progression that will rapidly spike without intervention.

“Flatten the curve,” the goal of keeping acute COVID-19 cases within the capacity of the health care system, is the rallying cry for public health officials struggling to illustrate why drastic steps are required to fight a virus that will produce mild symptoms in most affected people, yet could require intensive care for a significant minority.

How to play your part minimising the impact of Covid-19, in one simple gif, thanks to @XTOTL & @SiouxsieW https://t.co/s2331Up39n pic.twitter.com/IDqnxAs5z5

One of the three Connecticut patients is on a ventilator with pneumonia.

Lamont has directed local public health officials to dissuade schools, municipalities and private employers from holding events with an expected attendance of more than 100, a step that has prompted the cancellation of high school winter-sport championship tournaments, St. Patrick’s Day parades, conferences and countless business meetings.

Officials in some of the Fairfield County communities close to Westchester seemed especially attentive. Schools in Westport, Stratford and Region 14 closed due to contact with a virus patient. Officials in New Canaan, where an elderly woman was confirmed Wednesday as the third confirmed case, were exploring the possibility of conducting classes online, legislators said.

Greenwich closed the town’s senior center and arts center, which is known locally as “299 on The Ave.”

“We have been working closely with the Greenwich Health Department and it is with an abundance of care and caution that this decision has been made to protect our more vulnerable residents,” said Fred Camillo, the first selectman. “We know that older adults and people with serious chronic medical conditions are especially vulnerable, and we have made the difficult decision to preemptively close 299 on the Ave.” 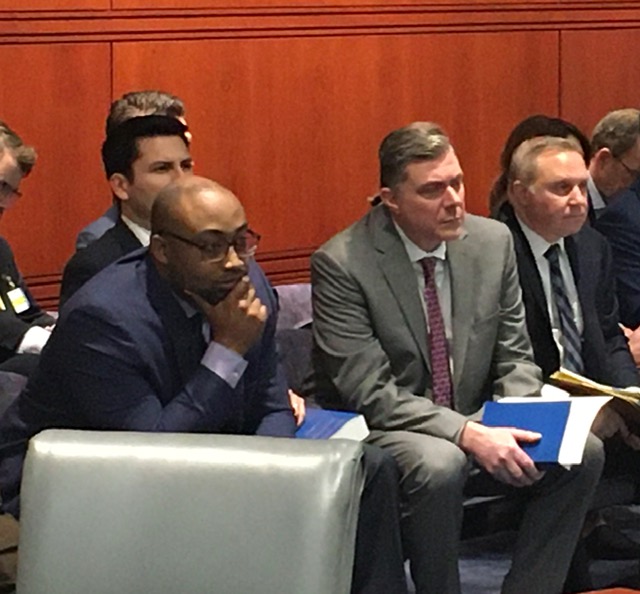 Klarides asked constituents to be patient about the closures, and Rep. William Petit of Plainville, a retired physician and ranking House Republican on the Public Health Committee, cautioned the public against complaining to local officials about cancellations, such as sports and school concerts.

“I think being over-prepared is better than being under-prepared,” Petit said. “People need to know the governor’s office and people in this building are in constant contact with DPH, CDC and WHO to get the best possible recommendations,” he said. “Everything that happens at the local level is going to spring from recommendations that come from the Department of Public Health.”

“Everything that happens at the local level is going to spring from recommendations that come from the Department of Public Health.”

“To our constituents, some of these decisions may seem premature or ones that can wait because nobody has seen really a huge outbreak of corona here in the state of Connecticut,” Duff said. But he added that stepped up testing will confirm that the virus is spreading here.

House Speaker Joe Aresimowicz, D-Berlin, who spoke before the third case was confirmed, said he would be thrilled if no other cases are confirmed.

“I don’t think it’ll stop there,” he said. “But if in six months from now we can look at each other and people are criticizing us for overreacting when we only had two confirmed cases — and that is the final number — we’ve all done our job.”