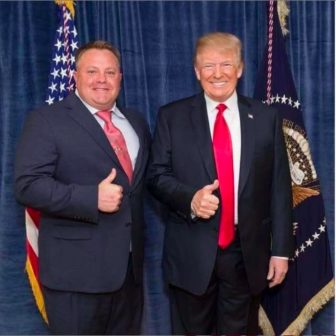 Washington – Connecticut congressional candidate Robert Hyde was to appear  before a federal grand jury Friday, but may have been given permission to delay his appearance because he claimed he was exposed to the coronavirus.

Hyde, who became notorious during the president’s recent impeachment hearings,  tweeted out a copy of a subpoena ordering him to appear before a New York grand jury on Friday.

He also tweeted out copies of texts with someone identified as FBI Special Agent Andrew Taff who reluctantly gave Hyde a continuance, pushing back the date he has to appear before the U.S. District Court for the Southern District of New York to April 10.

The continuance was granted because Hyde told Taff that he attended the Conservative Political Action Committee Conference in Washington D.C. last month where another attendee had tested positive for coronavirus. Hyde also claimed to have a “drippy nose and a small cough.”

He said he did not want to infect people in the courthouse. “And now we have a virus and I don’t feel well and you are risking a lot,” Hyde tweeted to Taff.

Taff replied that “lying to a federal officials is a federal crime and can be charged as an offense.” Taff also reminded Hyde that failing to obey the subpoena could result in his arrest.

“Mr. Hyde, this is not a game,” Taff responded.

Neither Taff nor Hyde could be contacted for comment.

Jim Margolin, the spokesman for the U.S District Court for the Southern District of New York, said he could not comment on grand jury proceedings.

Hyde’s behavior came under scrutiny during President Donald Trump’s impeachment proceedings when tweets between him and Lev Parnas, a former associate of the president’ personal attorney, Rudy Giuliani, were released by the House Intelligence Committee.

Those tweets discussed the surveillance of former U.S. Ambassador to Ukraine Marie Yovanovich and touched off an FBI investigation as well as an investigation by the House.