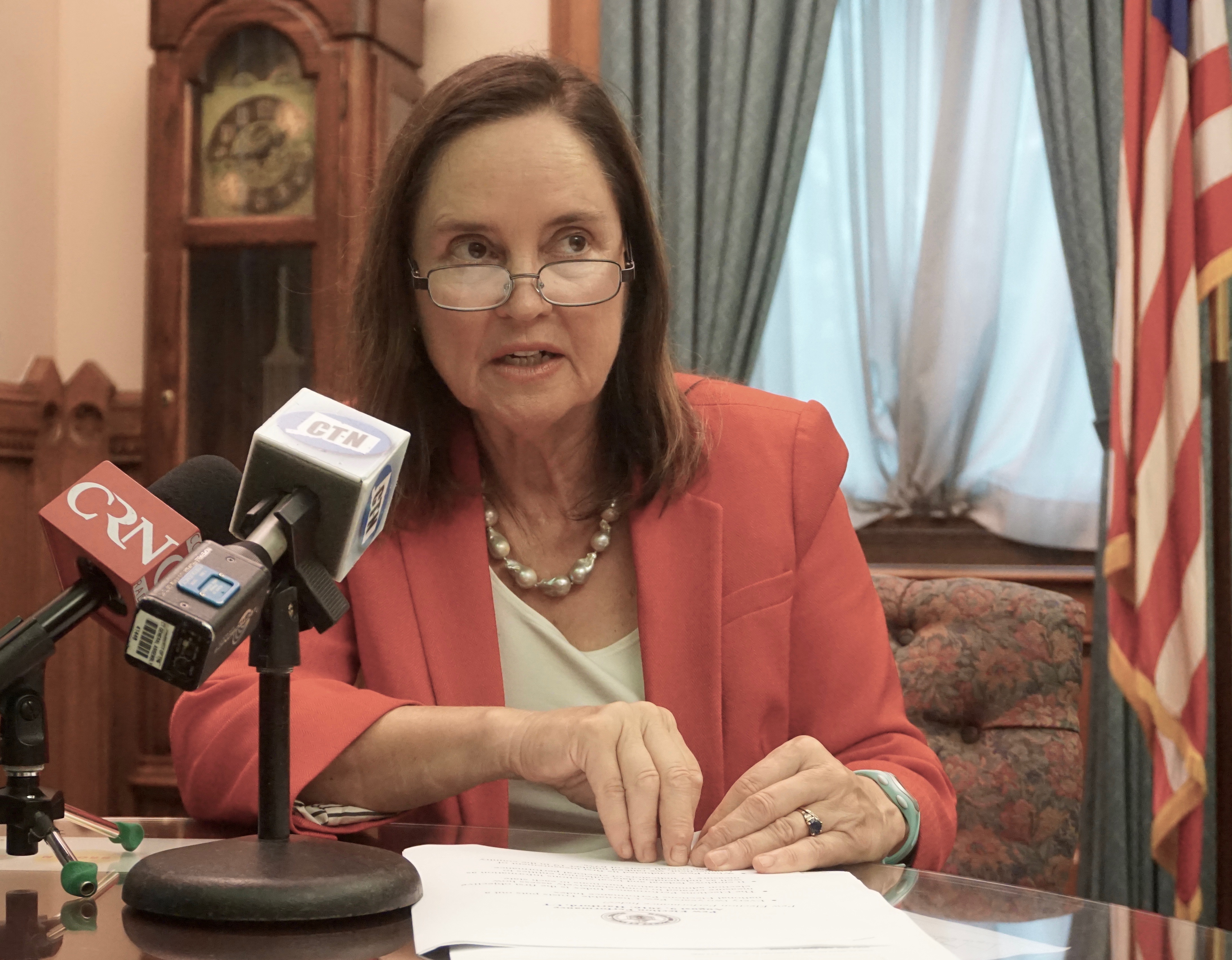 Secretary of the State Denise Merrill in 2016.

Connecticut and the other five northeastern states now scheduled to hold presidential primaries on April 28 are in talks about finding a new date in May or June to accommodate the current ban on large public gatherings due to the coronavirus.

“Our primary is very, very late, which ironically was considered a liability by some. Now, it gives us more time to think this through.” said Secretary of the State Denise Merrill, who has talked to Gov. Ned Lamont about a delay. “We don’t need to make that decision now.”

The registrars of votes are urging a postponement, and Merrill was scheduled to hold a conference call with the registrars and town clerks Tuesday, followed by a teleconference with the state party chairs, Democrat Nancy Wyman and Republican J.R. Romano.

The primary date is set in state law, but Gov. Ned Lamont has authority under his public health emergency declaration to waive laws and regulations.

“Only the governor can make that decision. I certainly will have a recommendation,” Merrill said.

Paul Mounds, the governor’s chief of staff, said the administration is in communication with other states about the primary, just as it has consulted with New York and New Jersey on a uniform approach to closing restaurants, bars, gyms and other facilities.

Connecticut, Delaware, Maryland, New York, Pennsylvania and Rhode Island are the states participating in what has been deemed the “Acela” or “I-95” primary on April 28. New York is considering moving its primary to June 23, when the state already has primaries for state office.

“We’re still in the middle of this crisis, “ Wyman said. “We’ve been reached out to by other states, especially those states who have the same primary date, about doing it together.”

In an email sent Monday night, the Registrars of Voters Association of Connecticut strongly urged Merrill to recommend a postponement and joined the Connecticut Town Clerks Association in saying that no-excuse absentee balloting suggested by Merrill was not an alternative to a delay.

“There are a number of reasons for this—concern for elderly residents, unavailability of volunteer poll workers, the fact that many polling locations are schools and Town Halls and may still be closed on April 28th, difficulty in keeping voting equipment clean and disinfected, maintaining social distancing of six feet and additional CDC recommendations,” wrote Sue Larsen, the president of the registrars’ association.

Larsen said the emergency posed by the COVID-19 coronavirus is unlike every other.

While we have endured major challenges to various elections in recent years—mostly due to weather-related disasters—this is clearly different and at a level we have never seen before,” Larsen wrote. “Storm-related issues didn’t encompass the entire state as this does, and literally every Connecticut municipality is dealing with this on a similar level.”

That might lessen the number of people at the polls on April 28, but not obviate the need for a primary.

Romano has objected to the Republican primary, saying that the two challengers to Donald J. Trump on the Connecticut ballot, former Gov. William Weld of Massachusetts and Rocky De La Fuente, a former Democratic candidate for president and U.S. Senate in several states, are not credible candidates.

“I’ve called on them to withdraw, so we don’t have to do this here. The truth is you can’t even get them on the phone,” Romano said. “That furthers our frustration on our side.”

The secretary of the state decides who makes the ballot based on a low bar set in state law: A candidate must be “generally and seriously advocated or recognized according to reports in the national or state news media.”

Guided by that law, Merrill said, she opts for access.

Connecticut’s elections calendar has other potential conflicts with the governor’s prohibition on gatherings of more than 50 people. Starting next week, the local parties are required to meet to select delegates who will nominate candidates for the General Assembly and Congress at conventions that must be held between May 5 and 26.

Absentee ballots for the primary are not available until April 7. Candidates can withdraw as late as March 24.

Merrill said Connecticut went ahead with primaries for local office on Sept. 11, 2001, despite the terrorist attacks on the World Trade Center and Pentagon.

“We must must have an election. It is the fundamentals of democracy at stake,” Merrill said. “It’s a balance. It’s a balancing act. We’re going to have to decide which way to go.”

Ohio, Arizona, Florida and Illinois were scheduled to go to the polls Tuesday, but Ohio Gov. Mike DeWine postponed the state’s primary late Monday after declaring the coronavirus a danger to the lives of poll workers and voters. The postponement came after a chaotic day of contradictory court decisions and the prospect of state government defying a judicial order to proceed.

“During this time when we face an unprecedented public health crisis, to conduct an election tomorrow would force poll workers and voters to place themselves at an unacceptable health risk of contracting coronavirus,” DeWine said in a statement on Twitter.