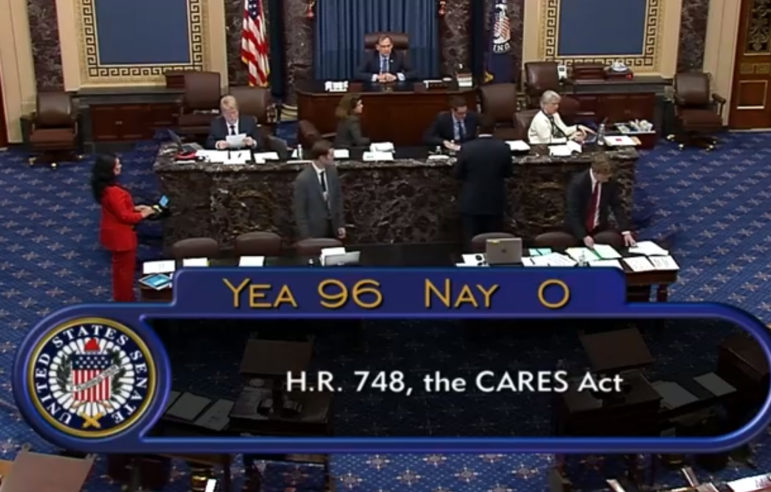 The final tally on the $2 trillion coronavirus relief bill in the Senate.

The bill would pour billions of dollars into states like Connecticut, give direct cash payments to most Americans and boost unemployment benefits to those who lose their jobs or are furloughed.

Just before the Senate voted on the package, Sen. Chris Murphy, D-Conn., tweeted “Crafting a $2 trillion bill in the middle of a national emergency shouldn’t be easy, and this wasn’t. But in the end, Republicans and Democrats put country first and party second. I wish that happened more around here.”

Sen. Richard Blumenthal, D-Conn., said the bill is “a monumental next step, but there must be more.”

“I’ll be working closely with the governor to ensure that we bring back every possible dollar to support our state,” Blumenthal said.

Hospitals would receive $100 billion and another $150 billion would be spent on a medical “Marshall Plan” that would spend the money on personal and protective equipment for health care workers, testing supplies, increased workforce and training, new construction to house patients, an increase of the Strategic National Stockpile, medical research into COVID-19 and Medicare payment increases to all hospitals and providers.

The 880-page bill would send $1,200 checks to many Americans, and $500 to each of their children. Those who earn $75,000 or less a year would get the full amount of money. But payments would be smaller for those earning more than that and cut off completely for those whose annual incomes are $99,000 or more.

Democrats won a change in this program which otherwise would have excluded those who earn too little to pay federal income tax last year — the nation’s poorest residents –from receiving any money.

The bill was approved on a bipartisan 96-0 vote, after the Senate defeated an amendment by a group of senators who had held up the bill for hours on Wednesday.  The defeated amendment would have reduced the bill’s boost in unemployment benefits to low-wage workers.

The coronavirus bill now goes to the House, which is not in session. House leaders will try to win approval of the bill in a manner that does not require all 435 House members to return to Washington D.C.

To reach the massive deal — the largest bill  ever considered by Congress — Senate Majority Leader Mitch McConnell also agreed to Democratic demands that unemployment benefits and money to states and hospitals be increased.

The GOP also agreed that a $500 billion fund to provide loans to industries that have been slammed by the coronavirus crisis, like the nation’s airlines, would be monitored by an inspector general and a new congressional panel.

“This is a wartime level of investment into our nation.”

Connecticut Gov. Ned Lamont, however, said he is looking forward to the help in the massive stimulus package.

“We’re hoping the cavalry is coming up  from Washington D.C.,” he said earlier Wednesday, before the vote. 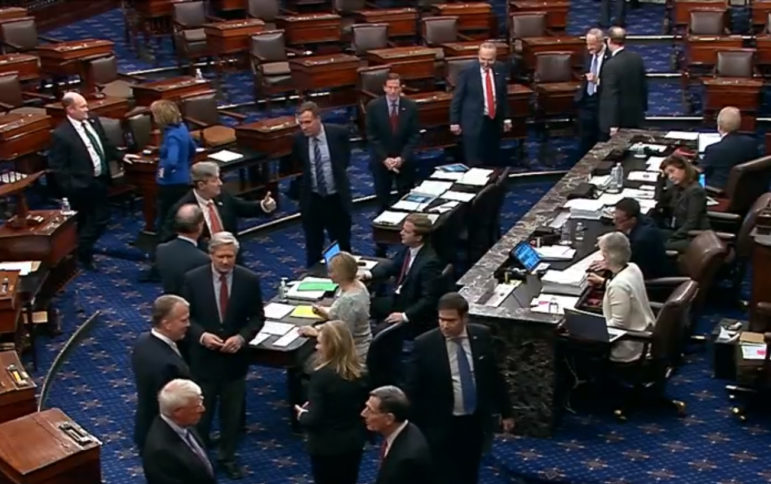 Senators mill around the Senate floor while casting their votes on the historic measure.

Although Lamont said it’s natural to “get a little nervous” about a $2 trillion bill that was crafted in middle of the night, he said the money for the state, which will be at minimum $1.25 billion for each state, “gives us a little bit of flexibility to take care of the people we have to take care of.”

“I think they got it pretty right,” he said.

Like Lamont, Murphy touted the money in the package for hospitals and the loans and grants to small businesses.

“I think there are some important resources to help Connecticut get through the virus,” Murphy said.

A member of the Senate Appropriations Committee, Murphy said he worked on the small business section of the bill, and the legislation’s grants and federally guaranteed loans available at community banks to small businesses. The loans would be forgiven if the employer continued to pay workers for the duration of the crisis.

The bill would give the Small Business Administration $10 billion to provide grants up to $10,000 to small businesses struggling to remain open and $17 billion for the SBA to cover six months of payments for small businesses with existing SBA loans.

“This is a wartime level of investment into our nation,” McConnell said.

Trump and congressional leaders said it’s likely Congress will approve additional stimulus bills. The $2 trillion package  is the third coronavirus bill since the pandemic hit the United States in February.

The bill was rushed through Congress without public hearings and no one can guarantee it will halt the U.S. economy’s sudden fall. It was the result of marathon negotiations among the White House and Republican and Democratic leaders in the Senate.

“Our health care system is not prepared to care for the sick. Our workers are  without work, Our businesses cannot do business. Our factories lie idle. The gears of the American economy have ground to a halt,” said Senate Minority Leader Chuck Schumer, D-N.Y.

The  new unemployment provisions, which for the first time will allow the self-employed and gig economy workers to apply for benefits, is likely to have the most direct impact on individual Americans. .

The bill offers the jobless $600 a week — considered 100 percent of wages for the average American without a paycheck — and pay 13 weeks of unemployment benefits without  a waiting period.

That new federal benefit would be in addition to any benefits currently offered by a worker’s state, which administers its own unemployment insurance programs.

Connecticut calculates benefits based on a worker’s past salary and benefits are capped at $649 a week. Workers are eligible for up to 39 weeks — around 10 months — of total federal and state benefits.

Pelosi wants the House to pass the coronavirus package by unanimous consent –without having to recall members back to Washington D.C. from their districts for a floor vote.

Many lawmakers are wary about traveling and being exposed to coronavirus, and several are in self-quarantine and won’t be able to travel.

But one prominent liberal — Rep. Alexandria Ocasio-Cortez, D-N.Y., — has already suggested she could oppose the package.

Meanwhile, Minority Leader Kevin McCarthy, R-Calif., has suggested the legislation could be approved by  a“voice vote” in the House. That could allow any members who wanted to debate the issue publicly to do so, but would not require a roll-call vote or a  quorum.