One-third report they cannot financially survive being closed 2 to 4 weeks.

As COVID-19 spread like brushfire through New Haven, Tennille Smalls was faced with a weighty decision: whether or not to keep her daycare open.

After all, infants and toddlers touch everything and constantly put toys in their mouths. Most of them don’t yet understand how to sneeze or cough into a sleeve. Though it is unclear how much children spread coronavirus, daycares often serve as petri dishes that foster the spread of illnesses like the flu or pink eye.

But parents rely on Smalls’ daycare, Gentle Hand Academy, so they can go to their jobs at Yale New Haven Hospital, the nearby medical center currently flooded with patients impacted by the coronavirus.

And Smalls relies on the tuition those parents pay so she can pay her mortgage.

At first, she resolved to stay open during the pandemic. 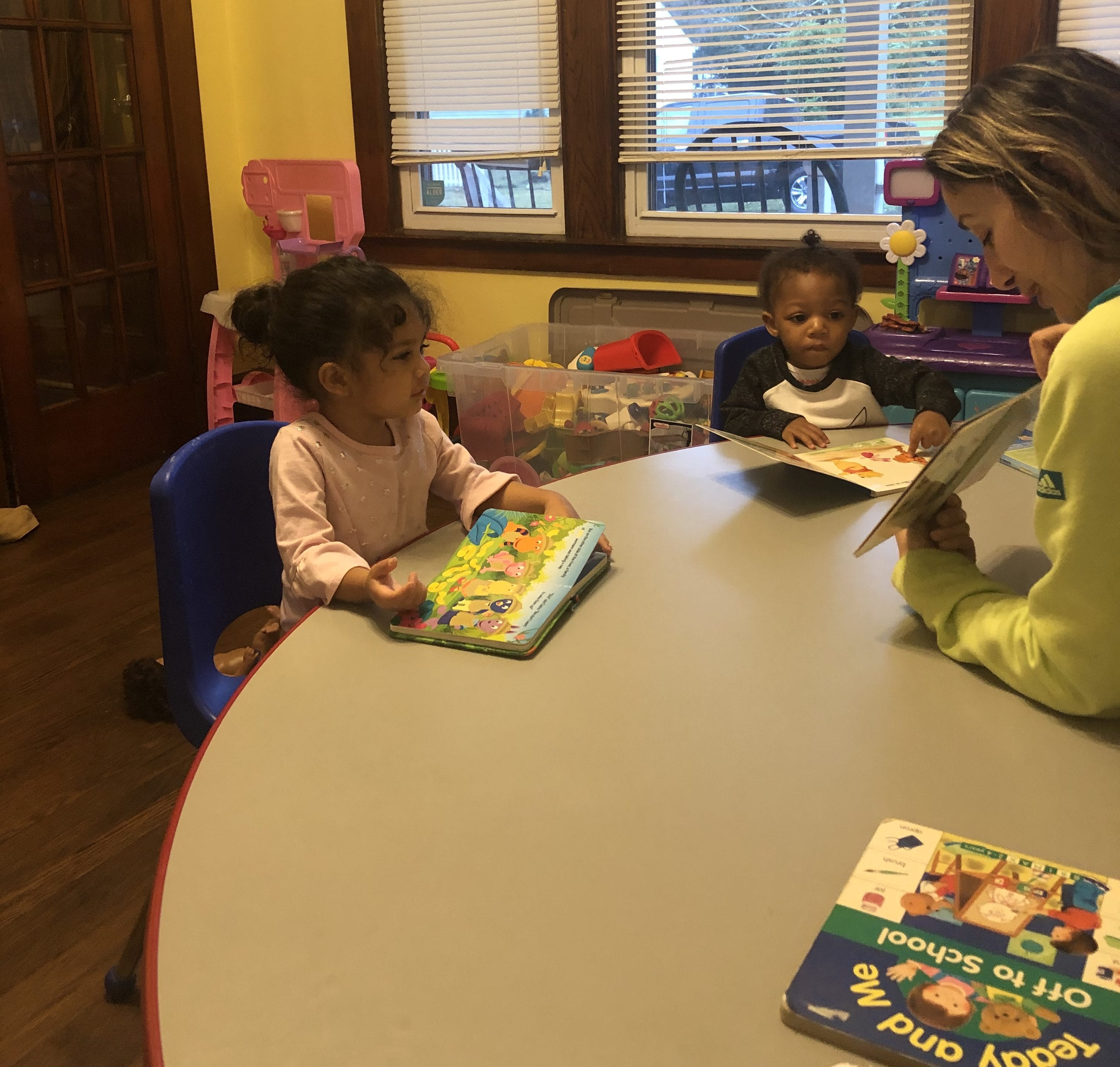 But then a colleague who runs another home daycare got sick, was hospitalized, and tested positive for the virus. Though Smalls didn’t have recent contact with her, it shook her.

She closed a week ago.

“We decided that we were going to stay on the front lines and that we were not going to be amongst those that have decided to close out of precaution and fear – until it hit a little close to home,” she said. “It was pretty scary. It became real.”

Smalls is not alone.

Half of the daycares surveyed by the state last week were closed. On Wednesday, nearly two-thirds of the  200-plus providers that participated in a video conference call hosted by the Early Childhood Alliance said they were closed.

Health experts recommend people practice “social distancing” and close all non-essential businesses to blunt the spread of the deadly virus. While it’s not necessarily the case that closing schools, daycares and shopping malls will reduce the overall number of infections, health experts say it will delay the spread of COVID-19 so hospitals aren’t overwhelmed, so-called “flattening the curve.”

Superintendents across the state almost instantly began closing their K-12 schools. When there were 20 confirmed cases in the state, Gov. Ned Lamont ordered any schools that remained open to shut down. They may remain closed until next fall.

“I think we see the urgency of the situation,” the Democratic governor said when making the announcement March 15. “It’s the prudent thing to do.” 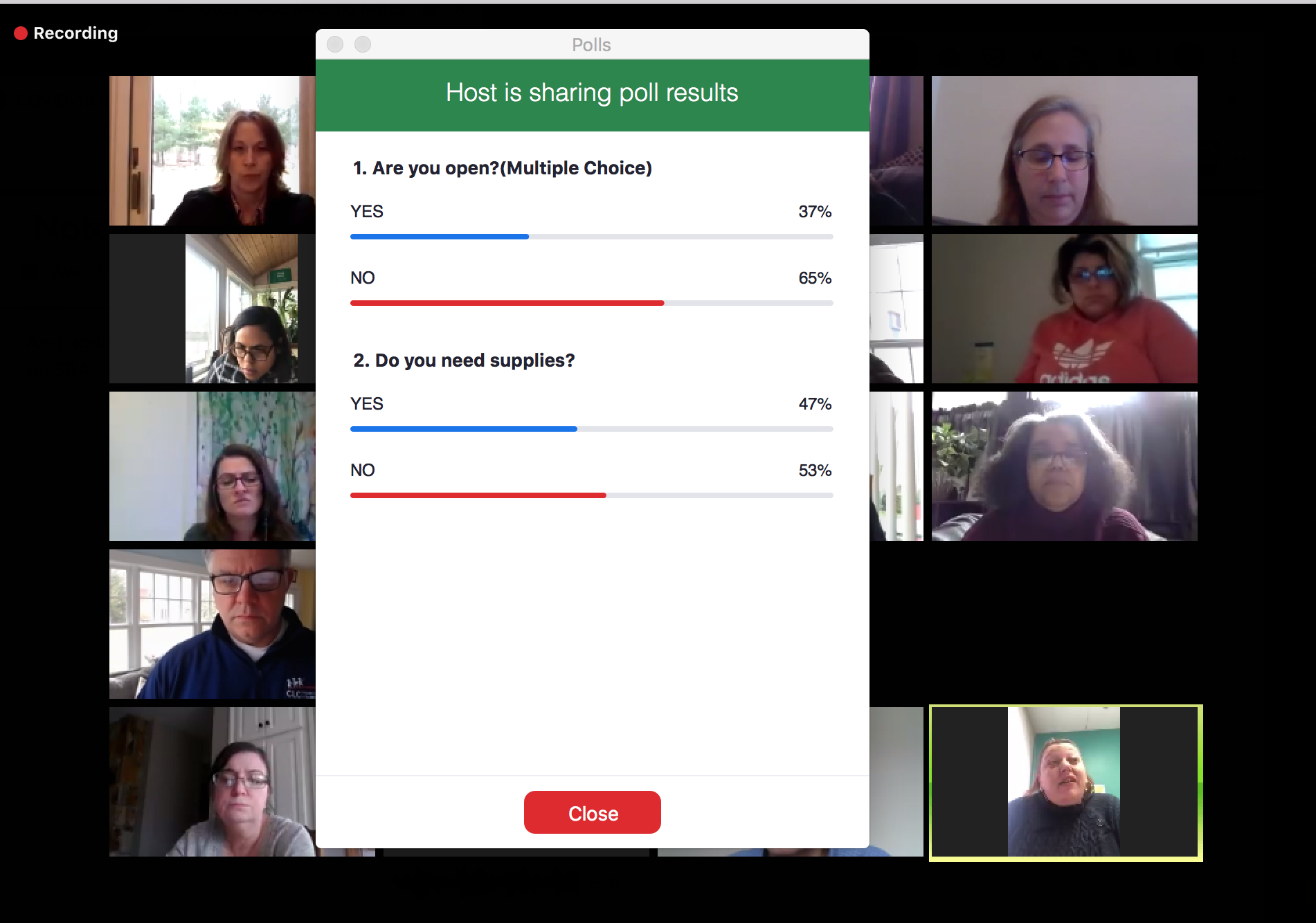 A survey of over 200 day care providers during a video conference call Wednesday.

Two days after the governor shut down the schools – as the number of identified cases surged to 68, and officials warned there are likely thousands more the state lacked the capacity to test at the time – Lamont urged municipal leaders to allow daycares to remain open to ensure health care workers have child care.

“Keep your daycare centers open. I know there are a lot of municipalities that are thinking otherwise right now. We need you,” Lamont said. The parents continuing to use daycares, he continued, are “health care workers. They’re first responders. Mom, dad: they’ve got to make sure their kids are taken care of in a safe environment or else they won’t be able to go to the hospital and be able to take care of you or your parents.”

One-in-four frontline health care workers in Connecticut have children under the age of 14, the Center for American Progress reports. That’s more than 57,000 nurses, doctors and other health professionals.

The cost of closing

As daycare owners weigh whether to close, a primary concern is whether they can afford to shut down – even temporarily – since so many operate at razor-thin margins. Responses to a national survey of providers showed that 30% cannot survive a closure of more than two weeks without significant public investment to help cover staff, rent or mortgages.

In Connecticut, a survey conducted by Connecticut Voices for Children of more than 200 nonprofits – of which half were child care providers – showed that 37% would not be able to survive two to four weeks of being closed without laying off employees.

Smalls has decided to reopen Gentle Hands Academy on April 7.

“It has been extremely difficult, extremely difficult. Bills are coming up at the beginning of the month,” said Smalls. She had in-hand prepaid tuitions for March from two low-income children covered by the state, but that still left a six-child budget hole.  “I’m hoping I have the money to pay my mortgage.” 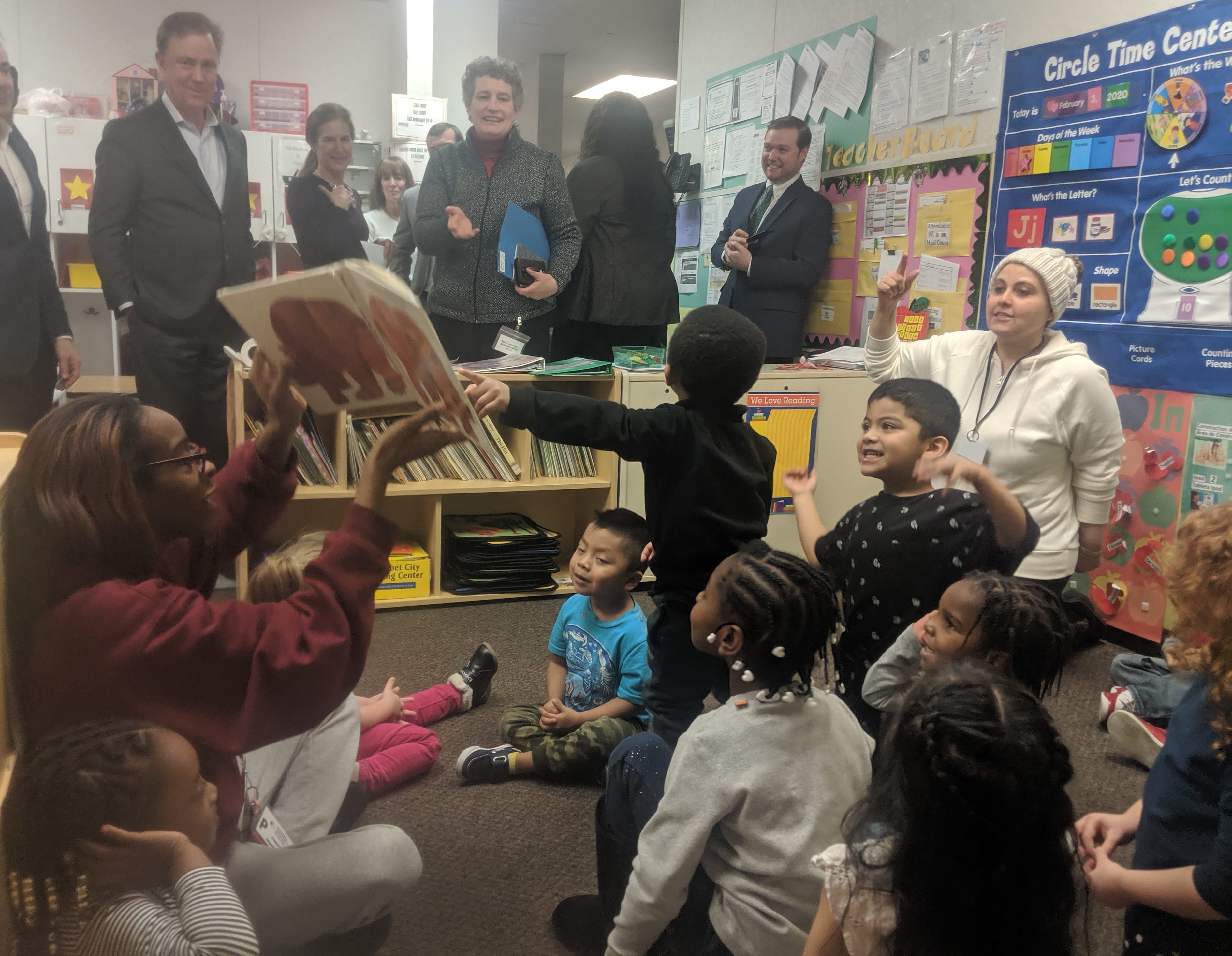 Gov. Lamont (left) and Office of Early Childhood Commissioner Beth Bye (center) visits Takisha Banks’ daycare class at ABCD in Bridgeport a month before the COVID-19 outbreak in the area.

She also wants to make sure parents are able to get to work at the hospital.

Now, some state help is on the way.

The state announced late Thursday two efforts to stabilize fiscally fragile child care programs by agreeing to pay tuition over the next three months for children from low-income families even if they are not attending daycare because of the pandemic. The state will also make these payments if the daycare is closed.

The state’s decision will help providers, but it won’t entirely resolve the fiscal crisis they face. That’s because many daycares rely on these tuition subsidies to cover just a fraction of the children enrolled. About one-quarter of children under the age of five have some sort of daycare subsidy.

“Child care providers are really scared. Their livelihood and business are at risk of failing,” said Merrill Gay, the executive director of the Early Childhood Alliance.

The state also will be making an extra $4.5 million available for programs that remain open to serve first responders and hospital staff, and will tighten the classroom size requirement to limit the spread of the virus.

“We see this as helping to maintain the supply of child care during this,” said Beth Bye, the commissioner of the Connecticut Office of Early Childhood. “We are helping supply child care for essential workers now, but we also want to make sure there is still a supply of child care when this is over.”

About a third of the daycare centers that closed in the 2018 fiscal year reported that it was because the business was not profitable, and the COVID-19 crisis is likely to exacerbate the already insufficient supply of licensed child care in Connecticut and throughout the country. Data compiled by The Center for American Progress shows that 44% of people in the state live in so-called “child care deserts,” and that access is disproportionately out of reach financially for black and Hispanic families.

Do you live in a child care desert?

“I think it’s clear that child care is one of the most fragile business models in our country,” Bye said. “It’s been fragile. We’ve been losing centers under good conditions with a strong economy. So, it’s a worry.”

It’s not entirely clear whether the massive federal stimulus bill awaiting action in the House will improve things, and many early care advocates’ initial reaction is that it falls short.

“Our nation’s child care system is the backbone of our entire economy — but you wouldn’t know that judging by Congress’ relative inaction to sustain providers and workers,” said Catherine White, Director of Child Care and Early Learning for the National Women’s Law Center. “The essential services provided by this workforce demand critical action by lawmakers to ensure we even have a child care system during and after this crisis.”

The autonomy that Lamont has given providers and local leaders to decide whether to stay open is not shared by neighboring Rhode Island and Massachusetts.

Nationwide, 11 states have ordered daycares to close while carving out some exceptions, such as allowing programs to open only for health care staff, according to The Hunt Institute and Duke University’s Sanford School of Public Policy. Massachusetts requires programs to win approval from the state before they can open to provide emergency care only for the children of first responders and essential workers.

Gay, whose alliance includes hundreds of child providers, said workers in Connecticut are scared to open.

“There is clearly unease among the child care workforce. I am wondering if there isn’t a double standard: well-paid public school employees are sent home while low-paid child care workers are expected to still work,” said Gay.

Local officials in some Connecticut municipalities have ordered day cares to close, including in New Haven, where the mayor is only allowing programs to stay open that have fewer than 13 children or are exclusively caring for children of health care staff. The move came a few days after providers in New Haven were shell-shocked by their colleague getting COVID-19.

The National Association for the Education of Young Children – often referred to by providers as being the “gold standard” – recommends closing daycares along with school systems.

But Bye – an expert in early child development, a former daycare director, and the prior leader of the state chapter of NAEYC – said it’s not that easy to just close everything down.

“Gov. Lamont has to look at the big picture. He’s speaking to the hospitals and the nursing homes that are going to be ground zero in this crisis. We’re very worried about the workforce,” said Bye. 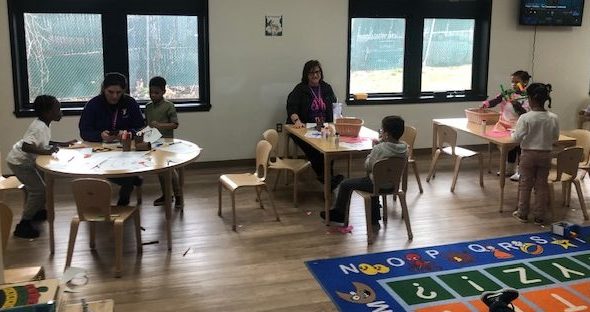 The YMCA of Greater Hartford opened two small child care programs Monday to care for hospital staff with the help of Bye’s office and with funding from billionaire philanthropists Barbara and Ray Dalio.

The first day the emergency child care programs were open, they had 17 children, a mix of infants, toddlers and school-aged children. By Wednesday, 26 children were being cared for at the centers so their parents could work at the area’s two hospitals.

The state has helped open emergency daycares for hospital staff for 14 hospitals. Three hospitals have already opened child care programs themselves. The state is working to open the emergency programs in places that have already closed.

The centers in Waterbury have each been provided with a full-time health official, robust levels of cleaning supplies, and they have a dedicated space to isolate anyone if it becomes necessary. Everyone’s temperature is checked at the door.

“I’m always consulting my nurse,” said Jim O’Rourke, the chief executive officer of the Waterbury YMCA. “We’re doing what we need to so these parents can go to work and know their children are safe.”