Connecticut officials should use budget reserves now to expand pandemic relief efforts and hire more employees to deliver services, according to a new report Thursday from Connecticut Voices for Children.

The New Haven-based public policy research group also repeated its call for a major state tax overhaul once lawmakers return to the Capitol, urging higher taxes on the wealthy to preserve programs and state tax cuts for low- and moderate-income households.

“After years of restricting the size of the state workforce, the Connecticut government should increase its capacity as well as its accountability — and oversight — to ensure that all new emergency relief programs are administered in a timely and appropriate manner,” Connecticut Voices wrote in its report.

The report doesn’t recommend a specific program, but does propose a limited form of cash assistance to those residents unable to meet “basic needs during the coronavirus pandemic and recession.”

The state Constitution has a balanced-budget requirement, but the Lamont administration still can pump major dollars into programs where necessary — even though the budget, on paper, has almost no room under the spending cap.

Despite its name, the cap actually is a limit on “appropriations” — how much spending the General Assembly can plan on and approve.

But the legislature doesn’t actually spend most of the money. Dozens of Executive Branch agencies, overseen by the governor, run day-to-day operations. And they not only can spend beyond their budgeted amounts, but routinely do, although not by $2.5 billion.

In an operation as large as state government — with more than 40,000 full-time employees and a yearly budget in excess of $21 billion — tens of millions of dollars in cost overruns, or more, occur every year.

In effect, the spending cap relies partly on the honor system. Legislators normally work with the governor to monitor these cost overruns, called “deficiencies.” But legislative leaders sent the General Assembly home in early March for public health reasons.

If the Lamont administration should spend beyond cap and budget limits — and if the budget remains in the red after the fiscal year ends on June 30 — the comptroller is required by the state Constitution to draw funds from the budget reserve and rebalance the books. Legislative action is not required.

And Connecticut Voices analysts argued more spending may be needed to beef up state agencies, which may not be in the best shape to handle the COVID-19 crisis.

Executive Branch staffing, which performs the bulk of state functions, declined by roughly 10% between 2011 and 2018 under then-Gov. Dannel P. Malloy. 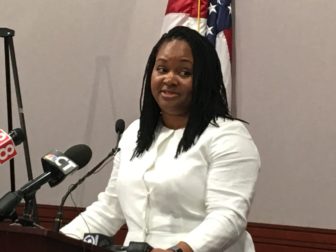 The rainy day fund is expected to carry state finances, at least, into the new fiscal year that begins July 1. There are no projections that it will run out within the 2020-21 fiscal year either, but state officials aren’t making any promises given the massive instability of the national economy.

Lamont’s budget director, Office of Policy and Management Secretary Melissa McCaw, said tapping the rainy day fund is not necessary at this time, though eventually the crisis will force the state to draw down on those reserves.

“Governor Lamont is committed to assisting all of Connecticut’s residents during this public health crisis,” McCaw wrote in a statement. “This is clear in how he was worked with state agencies, businesses, local government, nonprofits, hospitals, insurers, and charities to create and expand programs to help people throughout the state.”

McCaw added that “the federal government has provided significant resources to states and Connecticut will maximize these funds coupled with state resources where necessary to protect the lives of Connecticut residents through this emergency.”

Report: State must overhaul tax system as it climbs out of crisis

Regardless, the Connecticut Voices report recommends that whenever the state’s budget does need additional resources that the rainy day fund can’t provide, that it tap the state’s wealthiest households next.

Connecticut’s system of state and municipal taxes, combined, is highly regressive. When it comes to local property taxes and the state sales tax, for example, poor households face the same rate as wealthy families do.

A December 2014 report from the state Department of Revenue Services found households making less than $48,000 per year face an effective state and municipal tax rate of 23.6% while those above $13.2 million per year pay 6.3%.

Taxing the wealthy would have the least impact on the state’s economy, Connecticut Voices’ analysts argue. Rich households have a “lower marginal propensity to consume” meaning they spend a smaller percentage of their income to subsist, and save a lot more than poor and middle-class households do, the report states.

Regarding any tax changes, McCaw said only that an income tax increase is not needed at this time.

“Calls for raising Connecticut taxes and increasing the size of state government ignore twelve years of Connecticut’s economic and fiscal history, said Carol Platt Liebau, president of the Hartford-based Yankee Institute. “We have seen three major tax increases – including raising taxes on the wealthy and businesses — since the 2008 recession, and since that time our state has experienced more major budget deficits, some of lowest job and economic growth in country and the outmigration of residents to other states.”