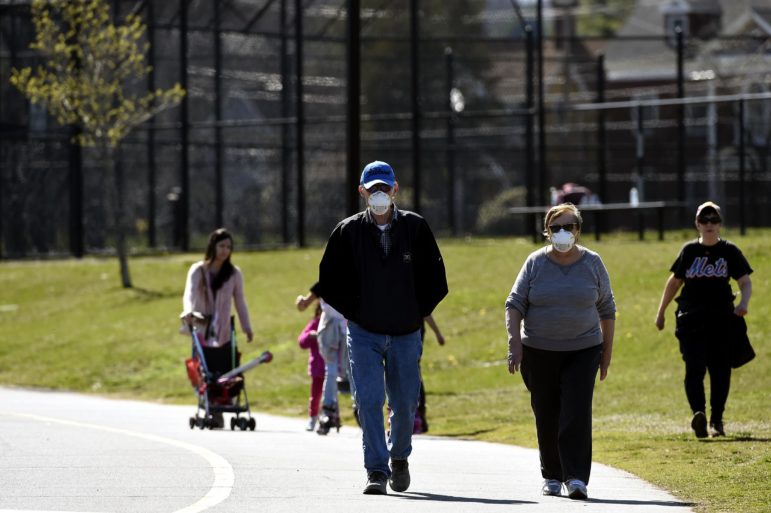 Exercise and social distancing on Monday at Walnut Hill Park in New Britain.

Gov. Ned Lamont said Tuesday that Connecticut’s social-distancing measures to flatten the rate of coronavirus infections seem to be paying off — striking a hopeful note even as the state’s death toll rose to 277.

It’s been nearly one month since COVID-19 radically altered day-to-day life in the state. The arrival of the pandemic prompted Lamont to issue stay-at-home orders that shut down schools and large portions of the economy.

Over the last five days, Lamont said the state recorded about 90 new coronavirus-related hospitalizations a day. That’s an improvement from the previous week, when there were about 100 daily hospitalizations.

The governor said the newer numbers were a positive sign.

“We seem to be flattening out,” Lamont said. “It gives our hospitals more capacity. It gives them more time to plan.”

But Lamont stressed it is still too early to declare “happy days are here again.”

On Tuesday, the state reported 71 more deaths due to complications from COVID-19. The state’s total count of confirmed coronavirus cases rose to 7,781, and 1,308 people are currently hospitalized.

Lamont asked residents not to relent on social distancing, saying it’s the key to maintaining a flattened curve.

“‘Hey dude, keep your distance,’” Lamont said. “I want to hear that wherever I go.”

Across Connecticut, 29 hospitals are now offering child care to first responders working during the COVID-19 pandemic, said Beth Bye, commissioner of the Office of Early Childhood.

The daycares are supported by a donation from billionaire philanthropists Barbara and Ray Dalio.

Additionally, Bye said her office is launching “CT Cares For Child Care,” a program that will leverage federal funding to provide support to daycares that have remained open, but are struggling to stay viable during the public health emergency.

“We know we need programs to remain open,” Bye said. “But we are also cognizant of the public health challenges and we’re working to reduce the risk of exposure.”

Daycare centers in the state that have remained open are required to abide by strict standards, including screening children for fevers on the way in and limiting group sizes for students.

As social distancing keeps more people at home during the coronavirus pandemic, the city of Hartford has announced it’s creating a dedicated police team to exclusively respond to and investigate incidents of domestic violence.

The move comes as the city reported a 20% increase in calls related to domestic violence over the last week. City officials said they are also concerned about underreporting.

United Nations Secretary-General António Guterres has called for a “ceasefire” to what he described as a “horrifying global surge” in domestic violence cases during the COVID-19 pandemic.

“Violence is not confined to the battlefield,” Guterres said Sunday. “For many women and girls, the threat looms largest where they should be safest: in their own homes.”

Hartford police said that global surge is playing out locally. In response, the department will assign two uniformed patrol officers to the domestic violence unit during the day and two will work at night.

Police Chief Jason Thody said this week that officers will also continue to connect people with Interval House, a domestic violence agency in Hartford that works with victims of abuse.

“In addition to our advocate embedded in the Hartford Police Department, we will redirect our advocates as needed to make sure that every victim of domestic violence receives the rapid, thorough response and support that they deserve,” Mary-Jane Foster, president and CEO of Interval House, said in a statement.

While Connecticut’s Judicial Branch has temporarily closed some courthouses, matters related to family orders and domestic abuse are fully operational.

The state moved forward Tuesday with purchasing laptops for 60,000 high school students in Connecticut’s under-resourced communities. The $23.7 million expense is the first major purchase for The Partnership for Connecticut — the collaboration between state leaders and billionaire philanthropist Barbara Dalio — and it accounts for more than half the agency’s $40 million annual budget.

The Partnership will prioritize getting the first wave of Dell computers in the hands of students who have no way to participate in online remote learning. The first 15,000 laptops will arrive in May, followed by 30,000 in June and 15,000 in July.

Partnership board members acknowledged Tuesday that the computers will be arriving long after schools closed their doors to curb the spread of coronavirus. But they pointed out that the  computers are expected to have a lifespan of 5 years.

“It will help facilitate learning opportunities over the summer and next year and we’ll leverage the power of it over time,” said Mary Anne Schmitt-Carey, president of the Partnership. “And it’s just a practical impossibility to get them sooner, but I don’t think that negates the need to get them and to deliver them absolutely as quickly as we can.”

“These are families that don’t have technology,” said Quesnel, who the Partnership tasked with ensuring the computers are delivered to students. “This is a real opportunity to bridge the digital divide.”

Also on Tuesday, the University of Connecticut kicked off its first day of COVID-19 testing on the university’s Storrs campus.

The truck was parked near the school’s student health services building on Glenbrook Road.

So far, “none of the nearly 900 students still living in UConn residence halls have tested positive for the virus,” university spokesperson Stephanie Reitz said in an email Tuesday afternoon.

Like other universities in the state, UConn has shifted to online learning for the rest of the spring semester. So foot traffic is light these days. Students remaining on campus are mainly international or students with no home to which they can safely return, Reitz said.

The next testing date is April 14 and is open to all undergraduate and graduate students on the Storrs campus, as long as they go through pre-test screenings.

The town of West Hartford is among the first municipalities to adopt two new property tax relief programs that the state has offered in response to the COVID-19 pandemic.

“We do not want any resident or local business that is suffering financial hardship because of COVID-19 to worry about their upcoming property tax bill,” Mayor Shari G. Cantor said in a statement Tuesday.

Municipalities are required to adopt one or both. West Hartford’s town council unanimously adopted both programs in a resolution Monday night.

The town said further guidance will be available soon on who is eligible for these programs.