Easter brings no respite from coronavirus, 60 new deaths in Connecticut 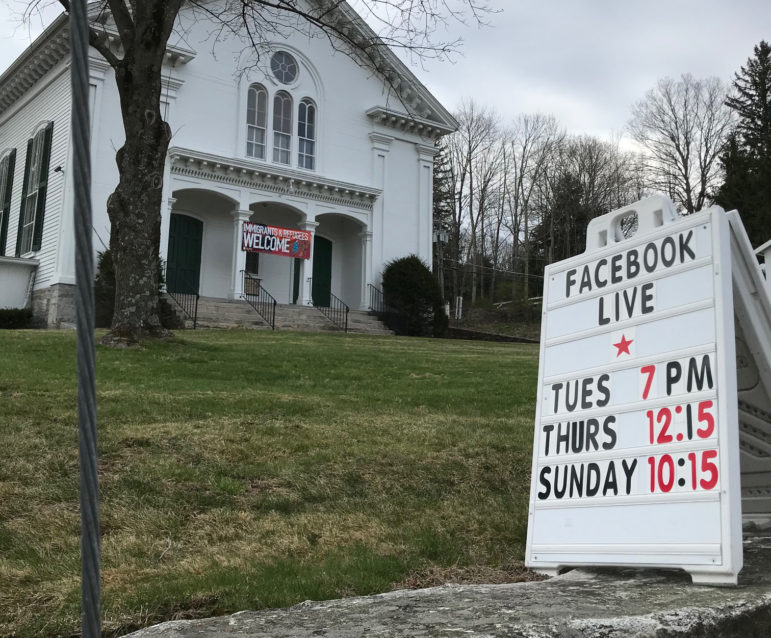 In an Easter like no other, churches all over Connecticut, like the First Church of Christ in Mansfield Center, took their worship services online.

The coronavirus pandemic colored everything about Easter on Sunday. Many Connecticut Christians took their worship services online, as COVID-19 continued its deadly course through the state. There were 60 new deaths recorded by state officials, bringing Connecticut’s cumulative loss of life to 554.

The Lamont administration reported an additional 525 positive COVID-19 diagnoses on Sunday– fewer than the day before, though the daily death toll continued its rise. The number of hospitalizations also experienced an upward tick — 61 new cases admitted versus 31 on Saturday.

The administration also said, that, to date, more than 41,220 patients have been tested in Connecticut. Approximately 1,654 have been hospitalized.

So far, there have been more than 21,000 coronavirus deaths across the nation and at least 542,000 cases have been reported.

In Sharon, First Selectman Brent Colley spent Easter fighting  Gov. Ned Lamont’s plan to  establish“recovery sites” in Sharon and Bridgeport for nursing home residents  who test positive for COVID-19. It is part of the state’s plan to curb the spread of the disease.

“My personal opinion is that this is a poor decision,” Colley said in an online “greeting” to town citizens.

Colley said he has asked Lamont to change his plans. He said he learned in a conference call with the governor on Saturday of plans to transfer long-term care patients with COVID-19 to Sharon Health Care Center and Northbridge Health Care Center in Bridgeport. The residents of those facilities who are not ill would be transferred to other facilities without COVID-19 patients.

“Moving residents out of their home/care facility is wrong and places these individuals at risk; it disrupts their care; places them in a mindset of confusion, possibly depression; it also affects their care-givers in similar, although different ways,” Colley said.

He urged like-minded residents to contact officials in the Lamont administration, providing the email addresses of those officials. He told his fellow residents to act “ NOW! Today. ASAP.” “They need to wake up Monday morning will an inbox full of questions and concerns,” Colley said.

Athena Healthcare, is the long-term care company involved in the transfers. It owns and manages the homes.

Of the 215 nursing homes in the state, 103 have reported at least one confirmed case of COVID-19. The state says a total of 1,181 nursing home residents have tested positive for the virus. Of those, 322 have been hospitalized and 165 have died.

When to reopen the state 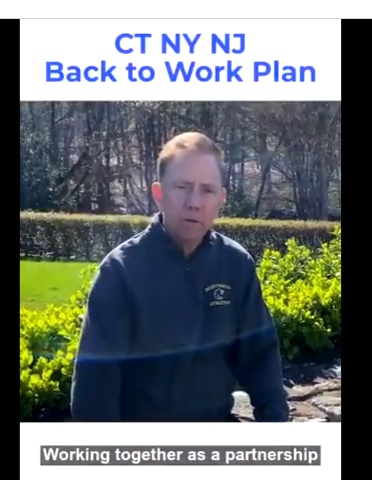 Gov. Ned Lamont spoke briefly on Twitter Sunday to remind residents he will be coordinating with New York and New Jersey.

The debate over how soon the country could end the coronavirus shutdown and get back to normal continued to rage Sunday.

President Donald Trump said he’ll rely partly on “instinct” as he convenes a new task force this week to advise him on when to reopen the nation for business from the coronavirus crisis.

“There are a lot of things that go into a decision like that,” Trump said on Fox News Sunday Morning. “It’s going to be based on a lot of facts and a lot of instinct. Whether we like it or not, there is a certain instinct to it.”

Lamont has said Connecticut’s schools and business will remain shut down until May 20, at the very least, and said he will rely on “metrics” to determine when to end the shutdown. Some Republicans in the state legislature have criticized Lamont for what they called a premature extension of the shuttering of schools and businesses.

Meanwhile, New York Gov. Andrew Cuomo on Sunday said he will open New York up “in a coordinated fashion” with Lamont and New Jersey Gov. Phil Murphy. “But we don’t know when we will do so,” Cuomo said. “If you say the schools are closed for June, you are effectively saying businesses aren’t going to open in June.” School systems in 16 states — including  Pennsylvania, Vermont and Virginia — have already cancelled the remainder of the school year and others are considering it.

On Saturday, on a short video on Twitter, Lamont said he would be meeting with Cuomo and Murphy on Monday to talk about a joint “back to work” plan.

Anthony S. Fauci, director of the National Institute of Allergy and Infectious Diseases, said Sunday the country will need a “rolling reentry” into normal life.

“It is not going to be a light switch,” Fauci said on CNN’s State of the Union. “It is going to be depending where you are in the country, the nature of the outbreak you’ve already experienced, and the threat of an outbreak that you may not have experienced.”

Fauci also said the transition could probably start, depending on circumstances, next month.

“We are hoping that at the end of the month, we could look around and say, ‘Okay, if there’s any element here that we can safely and cautiously start pulling back on — if so, do it. If not, then just continue to hunker down.’” Fauci also said there’s a possibility the virus will come back later in the year.

With about 16 million Americans out-of-work and at least 320,000 Connecticut residents applying for unemployment over the last few weeks, Congress will try again to come to an agreement on a bill aimed at helping small businesses keep their workers on the payroll.

Both Republicans and Democrats have agreed to add $250 billion to the Paycheck Protection Program, run by the Small Business Administration, that provides loans through participating banks to businesses with 500 or fewer employees. The loans are forgivable if the business keeps its workforce, spending at least 75 percent of their loans on salaries.

Democrats, including all members of Connecticut’s congressional delegation, also want to add hundreds of billions of dollars more to the bill for hospitals and state and local governments.

To respond to the coronavirus, Connecticut’s state government received $1.5 billion from the last stimulus bill, the massive $2.2 trillion CARES Act, and state hospitals received $380 million. Connecticut’s lawmakers said that money is not enough.

And the National Governors Association has asked Congress to allocate $500 billion to help states make up budget deficits that have resulted from the fight against the coronavirus.

Republicans are balking at adding any money to the bill that would boost the Paycheck Protection Program.

Senate Majority Leader Mitch McConnell, R-Ky., and House Minority Leader Kevin McCarthy, R-Calif., issued a joint statement Saturday morning saying they would not agree to any compromise with Democrats that changed their $250 billion loan program proposal.  The impasse prevented the emergency spending bill from consideration in the Senate last week and may continue into this week unless someone blinks.

The U.S. Department of Agriculture has a pilot program that allows food stamp recipients in eight states to purchase food from eight online retailers. But Connecticut is not a part of that pilot program.

“Given the unprecedented circumstances facing the people of our nation in response to the COVID-19 pandemic, we urge you to immediately implement nationwide expansion of the Online Purchasing Pilot for the Supplemental Nutrition Assistance Program (SNAP), as well as to include more retailers in the program,” DeLauro wrote in a letter to Perdue. It was signed by dozens of fellow Democrats.