When they return, state lawmakers will face a great test

They should focus on budget and recovery, saving other matters for the future 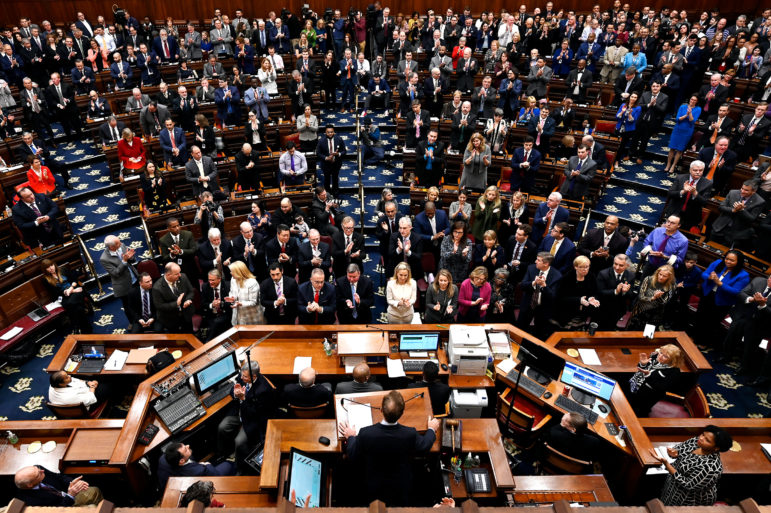 Opening day of the 2020 legislative session.

A crisis like the one we face now is a great challenge for the executive branch, which must respond swiftly to an unprecedented situation.  For legislatures, it can be a break- -literally so at the moment for our General Assembly in Connecticut.  Though lawmakers may issue grave statements, direction comes from a president, governor, or mayor; under the pressures of the moment, legislators largely follow their lead.

The great test of the legislative branch will come after the crisis has passed.  That is particularly true in Connecticut, where the coronavirus epidemic shuttered the General Assembly smack in the middle of its session.  By the time it gets back to work, the chance to move hundreds of bills through the normal legislative process will have passed.

The official purpose of this year’s session —known as the short session and confined to three months— is necessary adjustments to the existing biennial budget.  In light of plunging tax revenues and inevitable increases in health care, economic development, social services, and other costs, rebalancing the current budget will be challenge enough for the General Assembly.  Response to the virus will also demand changes in state law, authorizing and defining novel programs implemented for the crisis.  Additionally, a certain number of largely mechanical changes in statutes (many required by federal law) must be passed every session.

Beyond that, wisdom would suggest that the legislature do as little as possible.  No curtailed regular session or post-crisis special session could spend the months required to approve legislation through the normal process.  Hearings, committee meetings, and the time-consuming give-and-take involved in refining bills would be impossible.

But the legislature could still pass a full load of legislation, by combining many proposals into a few omnibus bills, then putting them before a special session by emergency certification.  In effect, it would take the worst of current legislative practice — the dreaded implementer bill, offered at the very end of session, when legislators have no time to examine its numerous and varied contents and the public has no chance to weigh in — and make it this year’s standard procedure.

There’s reason to fear that this dangerous approach might be adopted.  In a March 15 article in the Waterbury Republican-American, Speaker of House Joe Aresimowicz indicated that one possible response to the curtailed session “is consolidating various bills that have been selected for emergency certification and conducting hearings on these combined measures.”  In reference to public hearings under such circumstances, Senate President Martin Looney acknowledged that the legislature might “limit public comments to written testimony.”

On April 3, freshman Sen. Will Haskell was quoted saying that he is pushing for “out-of-the-box solutions,” asking leaders to consider using emergency certification process to pass what is described as  ‘one giant bill’ with a simple up or down vote.

Approving dozens or even hundreds of unrelated proposals in such a manner would be the biggest mistake the General Assembly could make.  Good bill-writing is hard enough under normal circumstances; this dramatically expedited process would guarantee adoption of many initiatives that are ill-conceived, poorly drafted, and hastily reviewed.  Worse, it would mean that many controversial ideas could be slipped through in an omnibus bill, which majority party members would support as a matter of course.  Opponents would have no chance to organize public pressure against individual proposals.

At a time when unity is essential to recovery, use of this crisis to promote an ideological agenda would sharpen the partisan divide, and further undermine faith in government and in our elected representatives.  In troubled times, we need government we can trust; it’s not a moment to pass controversial legislation by dubious means.

It was in an essay on the proper response to epidemics that Hippocrates famously wrote, ‘First, do no harm.’  Those words are as important for politicians as they are for physicians, and most important when stakes are the highest.  I implore the General Assembly to confine itself to the considerable work at hand, and leave all non-essential proposals to another session.

Joe Markley is a former State Senator from Southington.

Redistributing income through taxation does not bring prosperity

Charter schools need the same funding as other public schools