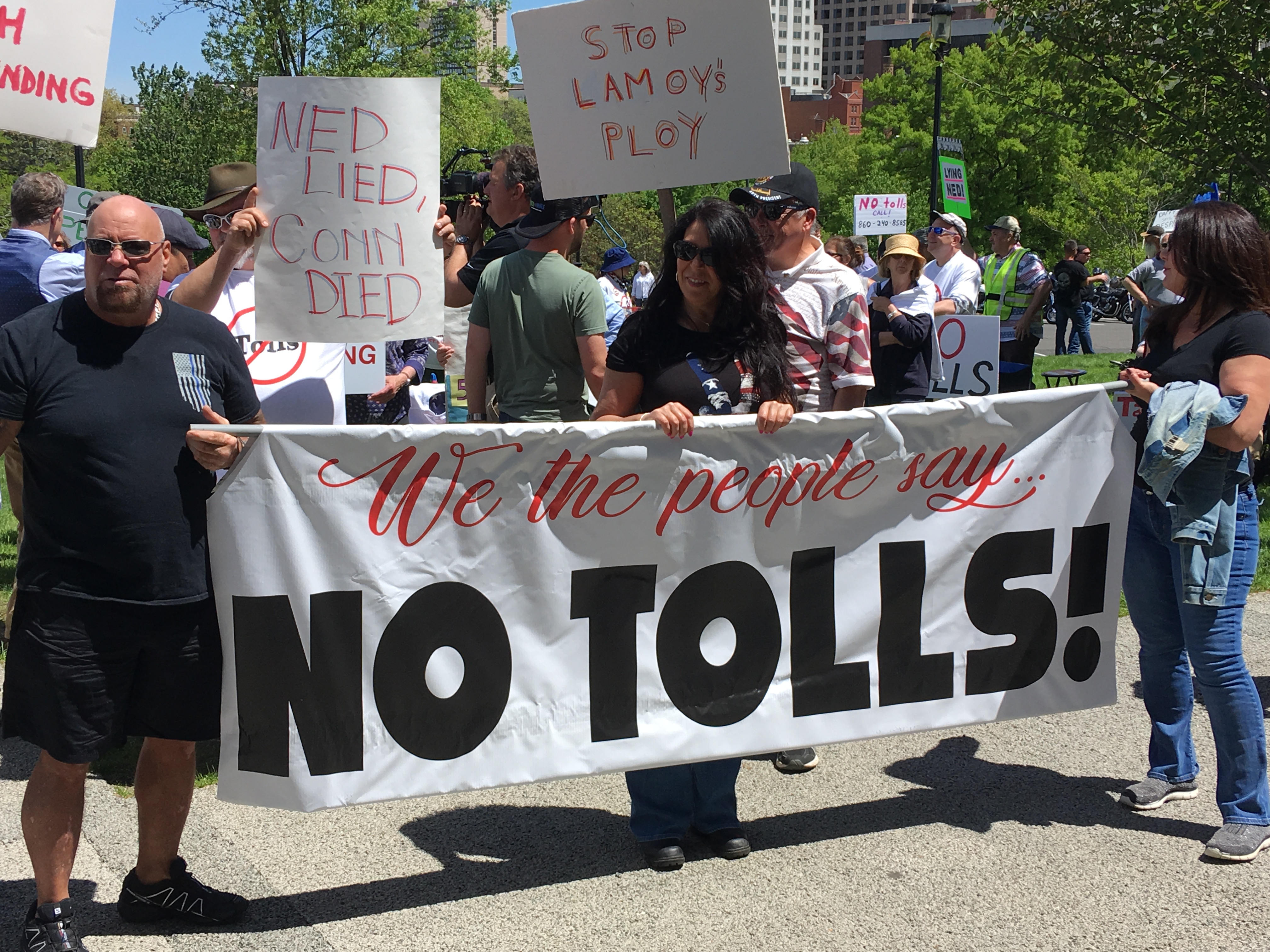 An estimated 1,500 protestors gathered at the Capitol last May to rally against tolls.

The unifying crisis of the coronavirus pandemic didn’t prevent the tolls debate from resurfacing Thursday at the state Capitol.

Republican legislative leaders charged Gov. Ned Lamont with retaliating against toll opponents after the State Bond Commission scrapped financing at the last minute for rail cars for the Waterbury and Danbury lines.

The administration countered that the change was due to a simple, agenda error. But Lamont also told critics that the state’s transportation program is running dry and legislators must address that.

“We don’t have an endless supply of bonding money,” the governor told Rep. Chris Davis of Ellington, a commission member and ranking House Republican on the Finance, Revenue and Bonding Committee. “We had to make some choices and these were the choices we made.”

The bond commission unanimously approved more than $700 million in total financing for various transportation projects across the state.

Thursday’s agenda originally called for some of that total — $300 million — to be used to purchase 72 rail cars to be distributed among four lines: Danbury, Waterbury, Hartford and Shoreline East — which serves south-central and southeastern Connecticut.

But Lamont’s budget director, Melissa McCaw, amended the item, saying the $300 million would cover just 60 cars, and that they would go only to Hartford and to Shoreline East.

When Davis asked why the 60 cars couldn’t be shared among all four lines, Department of Transportation Commissioner Joseph Giulietti replied that the Shoreline and Hartford lines have the greatest need for cars, and the oldest vehicles.

“Governor Lamont is punishing an entire region that is loaded with talent and skillsets that need to be developed,” House Minority Leader Themis Klarides, R-Derby, told the CT Mirror immediately after the purchase was revised. “I think it’s very clear what happened here.”

The Democratic governor — who originally proposed tolls on all vehicles and later just on commercial trucks — ran into bipartisan opposition on both fronts.

But Klarides said improving the connections between Danbury, Waterbury and New York City enjoys strong support from both parties — and comes with a huge economic payoff that would benefit all of Connecticut.

“The governor stood in the [Naugatuck] Valley five days before his election and said ‘this part of the state has been ignored for far too long. That will change if I’m elected governor.’ And all he has done is ignore us since the election.”

Rep. Rosa Rebimbas, R-Naugatuck, added after the meeting that Lamont’s decision was “completely irresponsible and further represses the ability of the greater Waterbury area to thrive. … if there ever was a presentation of a necessity, a need, that would benefit the state of Connecticut, this was it.”

And Republicans weren’t the only ones to complain.

Rep. Jason Rojas, D-East Hartford, also a member of the bond commission and co-chairman of the finance committee, told Lamont “there’s significant disappointment with the decision that’s been made and the manner in which it’s been made. … I hope, in the future, you’ll give it serious consideration.”

But administration officials have argued for months that toll opponents want to have their cake — in this case, robust investments in transportation — without paying. 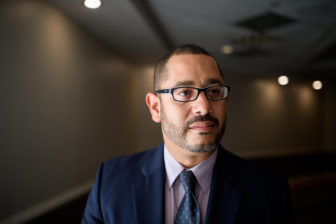 On paper, the budget’s Special Transportation Fund — which repays the borrowing that sustains highway, bridge and rail upgrades —  is in fine shape, projected to run modest surpluses through 2024.

But those numbers only hold up if Connecticut keeps fixing infrastructure at its current pace that barely maintains a state of good repair — and leaves very little for strategic projects that enhance traffic flow.

To address all concerns, DOT officials said earlier this year, the state would need to boost its annual capital investment by about 25%.

At that pace, the transportation fund hits insolvency around 2025 or 2026.

In other business Thursday, the bond commission approved the release of $136 million in long-awaited grants to cities and towns.

Some of those funds were due as far back as July. The current fiscal year, which the grants cover, will end less than three months from now on June 30. 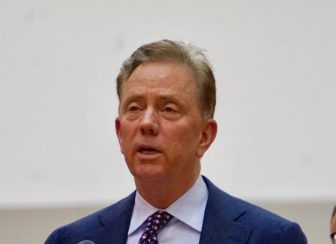 Though most grants are paid out of the state budget, Connecticut does finance some municipal assistance with bonding. But Lamont delayed approval of a full state bond package — a necessary prerequisite before grants can be distributed — through 2019 and the first two months of this year, trying to get legislators to approve electronic tolling.

The bond commission also approved the full $76 million pledged to towns this fiscal year through an omnibus public works grant.

This is a huge relief for towns, particularly during these challenging times,” said Betsy Gara, Executive Director of Connecticut Council of Small Towns. “Towns have had to delay projects, shift funding from other programs or draw down reserves to fund critical infrastructure projects.”

Thursday’s meeting was the bond commission’s second attempt to gather since the coronavirus pandemic began. An April 8 meeting by teleconference was suspended after technical difficulties.

The commission also approved $30 million to support ongoing efforts to transform the port of New London into the green energy capital of the Northeast.

Lamont announced on Feb. 11 that the Connecticut Port Authority had reached a deal with Eversource and its Denmark-based partner, Ørsted North America, to develop an offshore wind turbine farm expected to create 400 jobs and generate as much as 4,000 megawatt hours of electricity. Part of that initiative includes redesigning State Pier and the surrounding area in New London into a heavy-lift capable port that can accommodate wind generation equipment and other related cargo.

The NECR has leased a five-acre parcel to the authority to accommodate the delivery of wind turbine components to the port.