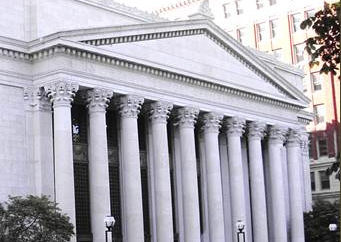 The U. S. Courthouse, New Haven

Washington – As the U.S. Senate returned to work this week, one issue has emerged as a roadblock in negotiations over a new, massive coronavirus stimulus bill: whether businesses should be shielded from federal lawsuits if their customers or workers contract COVID-19.

As states reopen, or plan to reopen their economies,  Senate Majority Leader Mitch McConnell, R-Ky., with the backing of the White House, insists employers be shielded from liability.

Yet Democrats, including Sen. Richard Blumenthal, D-Conn., who has emerged as a key critic of the plan,  say they will oppose such protections. “An absolute blanket shield from any and all legal accountability is going to be a non-starter,” Blumenthal said.

The battle has unleashed a frenzy of lobbying, with major industry groups and insurers on one side, and labor unions, and plaintiffs lawyers on the other.

On the side of businesses and insurers, Republicans are looking for ways to shield businesses and health-care providers from coronavirus-related claims while making exceptions for gross negligence. They are also considering protections for makers of protective gear.

Several bills that would shield businesses from lawsuits circulated on Capitol Hill on Monday, with a proposal by Sen. John Cornyn, R-Texas, gathering the greatest strength and attention.

Cornyn is trying to craft a bill that would protect businesses from coronavirus-related claims as long as they comply with government guidelines. Cornyn has also suggested the possibility of establishing a federal fund that would pay out claims. 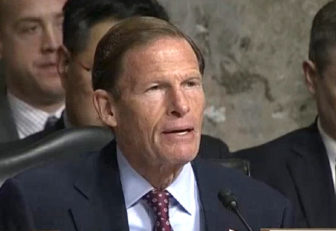 Sen. Richard Blumenthal says a blanket legal shield for business could result in ‘recklessness and even lawbreaking.’

To Blumenthal, the liability issue “confuses and distracts form the real and urgent task of conquering this insidious disease and reopening the economy.”

He said business interests and their congressional allies are “using the pretext of the pandemic,” to further  their goals of limiting lawsuits, which supporters say is necessary “tort reform.” That effort, Blumenthal said,  “has been part of the Republican agenda for a long time.”

“I see no reason at this point to extend the protections,” he said. “A lack of any and all accountability encourages recklessness and even lawbreaking.”

Blumenthal also said businesses have “nothing to fear” if they judiciously follow health safety guidelines when they open up.

Timothy Phelan, president of the Connecticut Retail Merchants Association and a member of the business committee of the Reopen Connecticut Advisory Group, said the issue has been  discussed among business members of that group. The idea of a state liability shield was raised,  “but we were advised it was a congressional issue,” he said.

Businesses say they need the protection to avoid the draining costs of responding to “nuisance suits” from people who insist they are to blame for new contagions without adequate proof.

Businesses are also fighting an effort by labor to include COVID-19 infections as a work-related illness that would be covered under workers compensation policies.

Meanwhile, Democrats say making more money to state and local governments should be at the top of their agenda when it comes to the next stimulus bill.

House Speaker Nancy Pelosi, D-Calif., says she will push for nearly $1 trillion over three years in the next relief package to help states and local governments hit hard by the pandemic.

“We’re not going to be able to cover all of it, but to the extent that we can keep the states and localities sustainable, that’s our goal,” Pelosi said.

Blumenthal thinks help to states and local governments should be even more generous, “in the range of $1 trillion over two years.”

States like Connecticut say they need additional federal help because unexpected coronavirus expenses and losses in tax revenues are resulting in budget deficits. Connecticut has projected a deficit of nearly $1 billion in this year’s budget and even larger deficits in the next couple of years.

But Republicans in Congress are pushing back against giving state and local governments more money, saying the $150 billion they received in the last massive stimulus bill should be enough. There’s also GOP resistance to allowing states greater flexibility to use that money to help them try to rebalance their budgets.

McConnell has suggested that the liability issue would need to be resolved before Congress provided any additional financial relief to states.

But Blumenthal said resistance to giving states and local governments more stimulus money is likely to dissipate. “I think the drumbeat from states, both ‘red’ and ‘blue,’ will ratchet up the pressure,” Blumenthal said.

The SBA on Monday said that 29, 559 small businesses in Connecticut were approved in the second round of PPP loans last week and that those loans totaled more than $2.5 billion.

That means nearly 48,000 Connecticut businesses have received PPP loans, which are designed to help businesses keep employees on payroll during the coronavirus pandemic.

PPP loans generally go to businesses with 500 or fewer employees. Their interest rate is 1% with a two-year term and the entire amount is forgivable under certain circumstances.