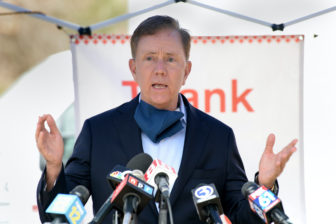 Connecticut Gov. Ned Lamont has high approval ratings, especially for his handling of coronavirus pandemic, in the latest Quinnipiac poll.

As Connecticut, New York and New Jersey — the nation’s hardest hit states in the coronavirus pandemic — consider when and how they should loosen restrictions, a Quinnipiac University poll finds majorities in all three states support those restrictions right now.

In a poll of 2,800 registered voters,  a majority of respondents – 59 percent in Connecticut, 58 percent in New York and 55 percent in New Jersey — said it will take a least a few months before their states are safe to begin to lift their stay-at-home orders and to reopen their economies.

The poll, released Wednesday, also showed that the popularity of the governors in the tri-state region has risen during the crisis.

“A crisis rockets governors to approval ratings rarely seen. In the Tri-State area, the public leans on their leaders and the gratitude shows,” said Quinnipiac University Polling analyst Tim Malloy.

There’s a split between respondents in each state about returning to work outside the home. 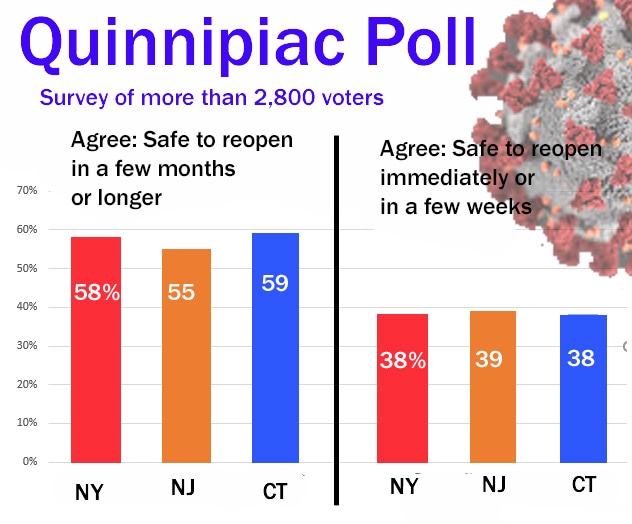 The poll also showed 71 percent of the respondents in the tri-state area, a clear consensus , believe  states should be prioritizing slowing the spread of the coronavirus by keeping people home, even if it hurts the economy. Only about a quarter of those polled in each state think reopening the economy should be the top priority.

“Cautious but not cowering. Having experienced a nightmare, the 32 million people who make up the New York, New Jersey, and Connecticut Tri-State area are willing to hang tough and wait out the virus for another few months,” Malloy said.

Roughly half of each state say that the coronavirus crisis has caused them financial hardship (NY 48 percent, NJ 51 percent, CT 46 percent), while about one third say they have lost their job or a substantial portion of their household income.

The poll also determined that 35 percent of respondents in Connecticut are concerned about their household being able to pay their bills in the next month and more than one-in-four, 26 percent, are very or somewhat concerned about having enough food to eat.

The telephone survey of registered voters was conducted from April 30 – May 4. The margin of error for  information from Connecticut respondents was plus or minus 3.2 percentage points.