Latinos have nation’s highest unemployment rate, and in Connecticut it could be extreme 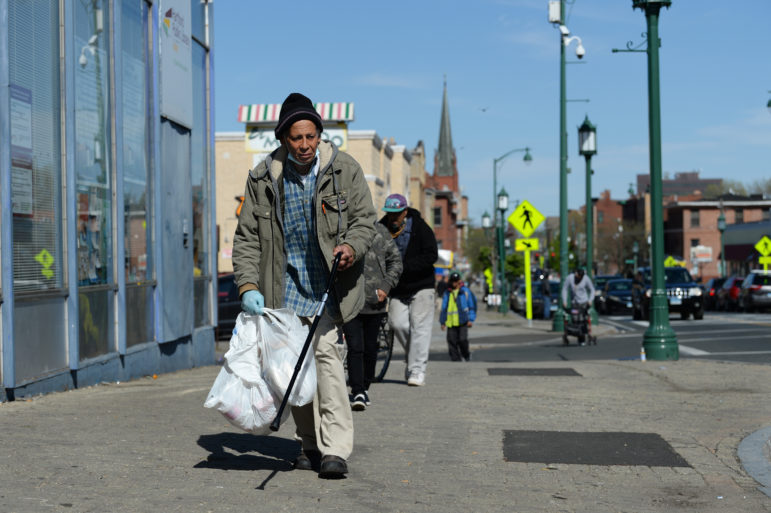 A man walks along Park Street in the Frog Hollow neighborhood in Hartford. The predominately Hispanic neighborhood has been affected by the COVID-19 pandemic where businesses have been closed for weeks.

The U.S. Labor Department Friday reported that the national unemployment rate, especially among Latinos and African Americans, soared to historic heights in April because of the coronavirus pandemic.

In Connecticut the job loss among Latinos may have been even greater.

However, according to UnidosUS, the nation’s largest Latino advocacy group, the coronavirus pandemic has ravaged sectors of the economy where Latinos and other people of color make up a significant portion of the workforce. The leisure and hospitality sectors are among the industries where Latino employees saw the greatest losses. They make up nearly a quarter of all workers in leisure and hospitality, nationwide and an even greater proportion of the workforce in that sector in Connecticut — 32 percent.

“These [unemployment] numbers are simply devastating for our community and country,” said UnidosUS President Janet Murguí.  “We are seeing that Latinos are bearing the brunt of this pandemic because they hold a disproportionate number of jobs in devastated industries such as hospitality, transportation and travel. And because these are often hourly or gig jobs, they do not have benefits such as sick leave and other paid time off.”

She is advocating that Congress address the job loss discrepancies in the next stimulus bill.

“The alarming rate of job loss overall among Latinos and other communities in similar circumstances underscores the need for stimulus efforts that fully include everyone,” Murguía said.

While no racial and ethnic breakdown of Connecticut’s jobless numbers is available — and no Connecticut unemployment data for April will be available from the U.S. or state labor departments until May 22 — Latino unemployment before the pandemic was much greater than white, non-Hispanic unemployment in the state.

According to the Economic Policy Institute and state data, Connecticut’s unemployment rate in the last quarter of 2019 averaged 3.8 percent. For non-Hispanic whites it was 2.7 percent and for the state’s Latinos it was 5.8 percent, putting Connecticut among those with the highest rate of Hispanic unemployment behind Pennsylvania, Arizona and Washington state.

Nationally, African-American workers had the highest unemployment rate 5.7%, followed by Hispanic workers at 4.1%, white workers (at 3%), and Asian workers (at 2.7%), EPI said.

Yanil Terón, executive director for the Hartford-based Center for Latino Progress, said those dire statistics may not reflect  the true size of the problem in the state’s Latino community because they only capture those who are jobless but looking for work.

“Lots of Latinos stopped looking for work before the pandemic,” she said.