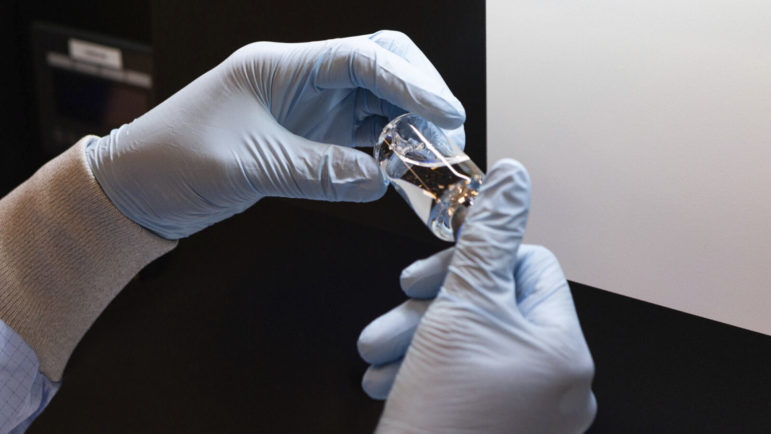 A vial of remdesivir, manufactured by Gilead Sciences, Inc.

Washington – Under heat for its initial distribution of the only drug approved to fight coronavirus, federal officials have finally sent 30 cases of remdesivir to Connecticut.

Although Connecticut is a coronavirus “hot spot,” the state was not among those to receive the first shipments of the drug – other than vials sent for use in clinical trials.  The amount of drug the state is receiving will treat only a limited number of patients.

Produced by Gilead Sciences, Inc., remdesivir was recently approved by the Food and Drug Administration to be given to COVID-19 patients on an emergency basis, even though clinical trials of the drug, initially produced to combat Ebola, have not been completed on COVID-19 patients.

Remdesivir does not cure COVID-19, but has been found to shorten the average duration of infection, on average, from 14 to 11 days. The FDA set guidelines allowing remdesivir to be given to patients with  blood oxygen levels of 94% or lower, or otherwise requiring supplemental oxygen.

The Department of Health and Human Services was criticized last week for declining to specify which hospitals and states had received the first shipment of remdesivir for emergency use. On Saturday, HHS  confirmed that nearly 23,000 vials had initially been being shipped to New York, nearly 5,000 to Massachusetts, 4,000 to New Jersey, and smaller allotments to Indiana, Virginia, Rhode Island, and Tennessee.

It’s not clear which hospitals in Connecticut will receive the drug in the second shipment.  The Connecticut Department of Public Health, which has been tasked by HHS with distributing resdemivir in the state, would not comment.

“State health departments will distribute the doses to appropriate hospitals in their states because state and local health departments have the greatest insight into community-level needs in the COVID-19 response,” HHS said in a statement.

University of Connecticut’s  John Dempsey Hospital said it has received 32 doses of remdesivir and expects to treat three to five patients with it.

Gilead says the suggested dose for adults and children who weigh at least 40 kilograms is 200 milligrams, or two vials, infused intravenously on Day 1 followed by once-daily maintenance doses of 100 milligrams, or one vial, infused for the next nine days.

Each case contains 40 vials of the drug, so the amount Connecticut has been allocated,  1,200 vials, will treat about 100 patients.

The HHS announcement made no mention of AmerisourceBergen, the drug distributor that had worked with Gilead last week to distribute remdesivir to hospitals.

Doctors and public health officials have called for the federal government to create a transparent system for distributing remdesivir.

Gilead says it will donate a total of 607,000 vials of remdesivir to treat roughly 78,000 patients in the next six weeks,  HHS said.