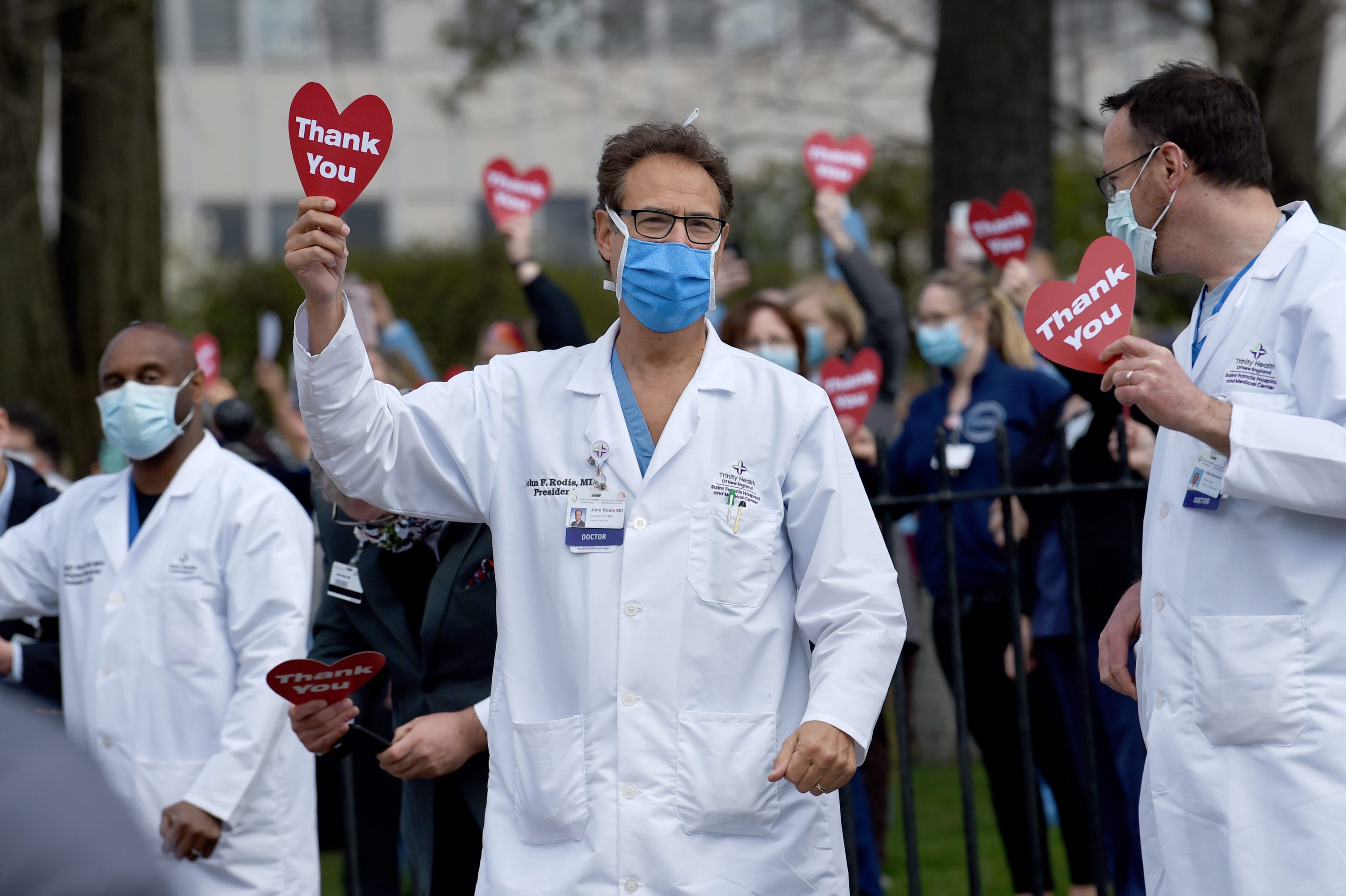 Rodis and other hospital employees wave red “Thank You” hearts as a parade of first responders passes by the hospital in April.

Dr. John Rodis, president and CEO of Saint Francis Hospital since 2015, has departed the post, Trinity Health of New England informed executives Thursday, though no reason was given for the separation.

Reginald J. Eadie, president of Trinity Health, the parent company of Saint Francis, also announced a national search for a replacement would begin immediately, and that Thomas Burke, the hospital’s vice president of operations, would serve as interim president.

The first physician to be appointed president in Saint Francis’ 118-year-history, Rodis guided the hospital through an era of consolidation and rising state taxes. His last challenge arrived this spring as he oversaw an expansion of temporary facilities as the hospital faced the crush of the coronavirus pandemic.

Reached by phone Thursday evening, Rodis, 64, declined to discuss the circumstances surrounding his departure, but said: “I’m totally fine and I wish the hospital all of the best.”

“During his tenure as president, Dr. Rodis led the Saint Francis team through significant change and transformation, much of which has been recognized at the national and regional level,” Eadie wrote.

He also praised the outgoing CEO for the hospital’s designation as a Level I trauma center, high ratings for Saint Francis from the U.S. Centers for Medicare and Medicaid Services, and being the only hospital in Connecticut to make IBM Watson Health’s top 100 hospitals in the nation.

Rodis, who lives in Farmington, had two stints at Saint Francis, starting there early in his career as a maternal-fetal medicine fellow in 1985. He was named its eighth president in December 2015.

In between, he was head of obstetrics and gynecology at Stamford Hospital, served as its chief medical officer, was a faculty member at the UConn School of Medicine, and became chair of OB-GYN at Saint Francis in 2011.

Rodis took the helm at Saint Francis as a recent state provider tax was quickly expanding into a huge fiscal burden on Connecticut’s acute care hospitals.

That tax, which sparked an industry lawsuit charging it violated federal Medicaid rules, drained $1.7 billion from hospitals between 2012 and 2019 — more than $240 million per year on average.

Rodis stepped lightly around the topic during an April interview with the CT Mirror, praising Gov. Ned Lamont for reaching a settlement with hospitals in 2019 — a deal that pledges to restore industry funds between now and 2027.

Rodis declined at the time to speculate how much the tax affected hospitals’ readiness for the pandemic, but said there clearly was an impact.

“I think there’s no doubt it took a lot of money out of hospitals, I’m not gonna deny,” Rodis said, adding it delayed investments in facilities, equipment and staff. “I’m just happy to say the tax issue is beyond us.”

During that April interview Rodis also praised staff at Saint Francis for their swift response to the coronavirus crisis.

A mobile care center — a voluminous tent on the hospital’s campus with 25 additional beds — was erected on the grounds. An auditorium and two large conference rooms were cleared so exhausted staff could lay down on cots.

And staff sterilized N95 masks for reuse and purchased 3D Printers to create their own protective gear when supplies were low.

“I’m at the point in my career where you kind of think, Oh, I’ve done everything there is to do,” Rodis said two months ago.“And then things like this come along that remind you how you still have a lot to learn.”