The Lamont administration has until Aug. 31 to pledge major financial backing 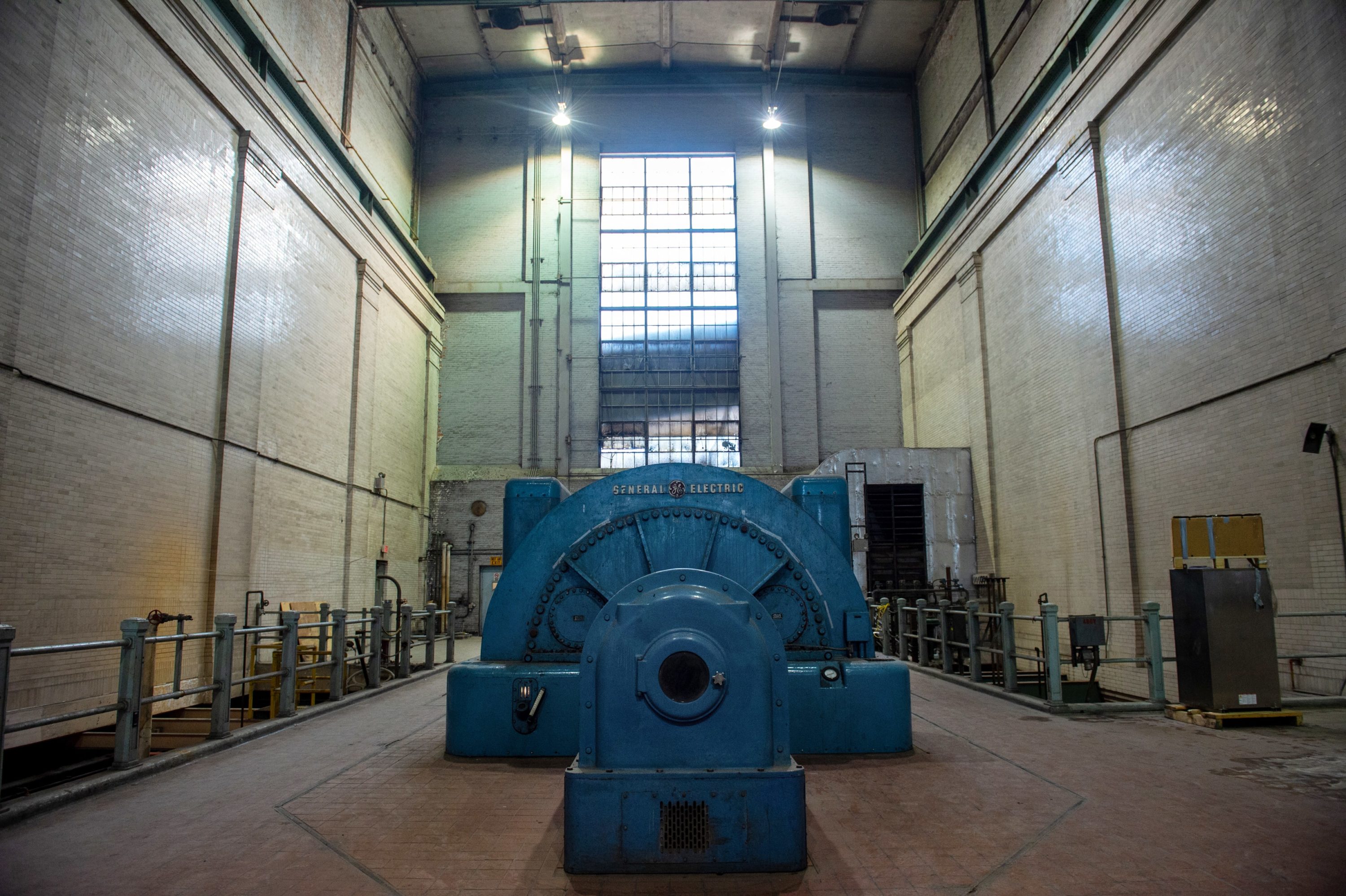 One of two General Electric steam turbines dating back to 1950 generates 45 megawatts of electricity that is then provided to the state at the MIRA trash-to-energy facility in Hartford’s South Meadows.

The governing board responsible for the aging and often broken Hartford regional trash-to-energy plant voted Thursday to end a multi-year effort to rehabilitate the facility unless the state agrees by Aug. 31 to provide major financial backing for the project.

A current proposal to overhaul the plant – which handles about a third of Connecticut’s trash – is estimated to cost about $330 million, but Gov. Ned Lamont’s administration has balked at committing to that kind of state funding.

Additionally, the state is also looking at potentially massive budget deficits as a result of the coronavirus pandemic, which could further diminish the chances for major state funding for the trash plant project.

Directors of the Materials Innovation and Recycling Authority, the quasi-state agency that runs the garbage plant, warned that Connecticut might be forced to ship 2.5 million tons of garbage a year to out-of-state landfills if the state fails to offer major financial support.

The board’s unanimous vote gives Lamont and the General Assembly until the end of August to agree on funding the plant’s rehabilitation. Otherwise, years of negotiation with a state-selected developer will end in failure.

The governor’s staff declined to respond directly to the MIRA board vote Thursday. Max Reiss, Lamont’s press secretary, said the administration’s response would be handled by “the Department of Energy and Environmental Protection, which deals directly with MIRA.”

“The Connecticut Department of Energy and Environmental Protection (DEEP) invested considerable time and energy in developing a request for proposal and screening potential partners,” DEEP Commissioner Katie Dykes said. “It is unfortunate that MIRA was not able to come to terms with an innovative partner to update and revitalize the Hartford Resource Recovery Facility.”

MIRA President Thomas Kirk said that, without major state backing, municipalities would have to pay as much as $145 a ton for garbage disposal for the next 30 years to finance the project, and that local officials have already rejected that as an option. Municipalities currently pay about $83 a ton to use the plant. Instead, cities and towns that now use the regional plant in Hartford are likely to end up sending their garbage for out-of-state disposal if there’s no fix for the dilapidated facility, Kirk said. 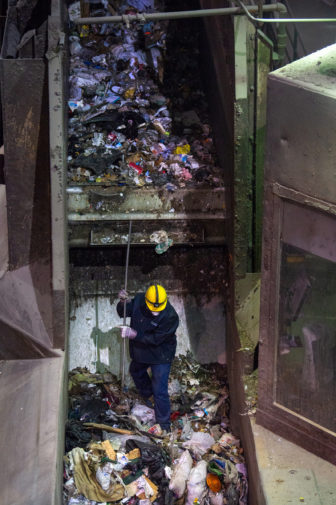 A maintenance worker cleans an infeed conveyor that moves unprocessed garbage into the shredder at the MIRA resource recovery facility in Hartford’s South Meadows. The shredding process breaks down the garbage in preparation for combustion in the power block facility.

MIRA board members expressed dismay at the thought that the state might decline to help fix the Hartford facility.

“We still have a little bit of time to wake everybody up,” said Patricia Widlitz, a former chair of the legislature’s Environment Committee and a MIRA board member. “I did not join this board to be in a position of recommending that we be on our way to shipping our waste out of state … It’s not a pretty picture, no matter how you look at it,” she said.

“The present administration has failed to recognize that the proposal we’ve developed… is the best solution at this point in time,” he said. “Every environmentalist should be shocked and appalled that we are going to revert to landfilling.”

“This is the first I’ve heard of this [Aug. 31] deadline,” Looney said when contacted by the CT Mirror. “I don’t know what kind of commitment the administration would be willing to make to do bonding for this project,” he said.

A rehab plan hangs in the balance

In December 2019, MIRA reached a proposed agreement with the Sacyr Rooney Recovery Team, the contractor selected by the state to rehabilitate the regional plant. The $330 million agreement ended a long-running deadlock in negotiations.

But Lamont, who has been attempting to curtail state borrowing, declined to provide any indication he would support such the financial commitment to carry out such a major project. 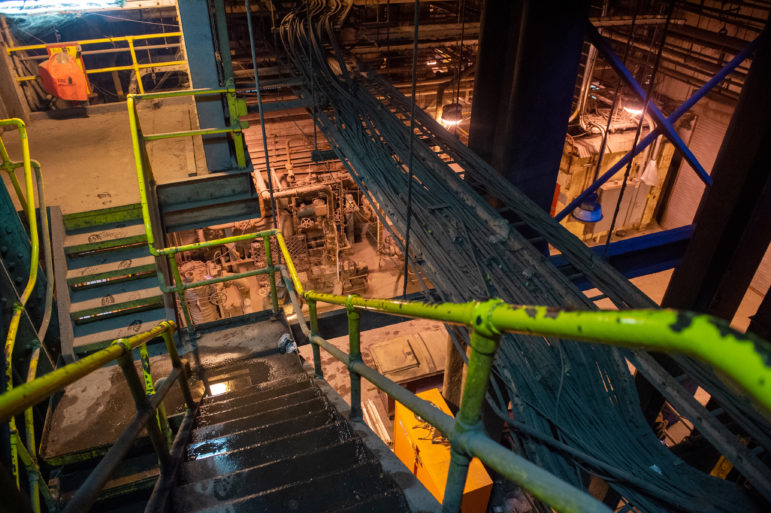 The Materials Innovation and Recycling Authority (MIRA) facility in Hartford.

The MIRA proposal also drew harsh criticism from Hartford activists and officials who argued that the plant, in the city’s South Meadows section, had been causing pollution and traffic in Hartford for far too long. They claimed a new plant should be built elsewhere, but state officials warned that there wasn’t a viable alternative.

The regional facility has been operating as a trash-to-energy plant since 1988 and has suffered increasingly frequent and expensive breakdowns. In 2018 and 2019, the aging plant was shut down for months as a result of a “catastrophic failure” of key equipment.

That one failure alone cost MIRA and its participating municipalities more than $15 million. The quasi-state agency was forced to send tens of thousands of tons of garbage to landfills as far away as Ohio during the major shutdown. Continuing to do that going forward would result in “a carbon footprint that would far greater” than overhauling and improving the Hartford trash plant, Barlow said.

State officials have been warning since 2007 that rehabilitation or replacement of the Hartford facility was becoming critical.

“It’s shocking to me that there really is no sense of urgency,” said Tom Swarr, one of the MIRA directors appointed by the governor. Officials, he said, need “to make people realize how desperate the situation is.”