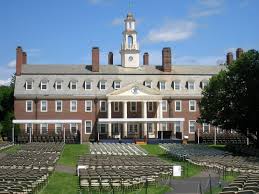 Washington – Although most Connecticut companies approved for loans from the Small Business Administration’s Paycheck Protection Program borrowed far less money,  nearly 50 Connecticut companies — including large real estate, manufacturing and law firms  — applied for the maximum of between $5 and $10 million.

According to information the SBA released Monday, Connecticut offices of the Shipman and Goodwin and the Robinson & Cole law firms received Paycheck Protection Program loans of between $5 to $10 million.

So did a number of Connecticut manufacturers, including Ulbrich Stainless Steels & Special Metals;  Fuelcell Energy, Inc.; and the Berlin Steel Construction Company.

None of the companies immediately responded to requests for comment.

Choate Rosemary Hall, an exclusive  prep school in Wallingford whose alumna includes President Donald Trump’s daughter Ivanka, was also on the SBA list of the largest PPP loan approvals. But Choate spokeswoman Alison Cady said the school backed out of the multi-million dollar loan on May 12 “once we understood the full scope of the organizations it was intended for.”

“When we understood the intention of the process, we withdrew,” Cady said.

The Paycheck Protection Program, or PPP, has been credited with saving millions of jobs during the pandemic. It provides companies with SBA-backed loans at very low interest rates and allows loan forgiveness for payroll costs for a 24-week period.

But there have been problems.

Dozens of publicly traded companies that initially received millions of dollars from the program returned the money after the U.S. Treasury told them the program was not meant for large, well-capitalized companies and that they ought to give the money back.

The PPP program also received criticism for initially allowing hundreds of other well-capitalized firms to receive the loans and for sometimes contradictory rules issued by the Treasury Department and the SBA.

Monday’s release of the nationwide data revealed that private equity-backed chains and companies owned by members of Congress received money from the Paycheck Protection Program, provoking calls from lawmakers for new restrictions on the program.

The information released Monday by the SBA was a compilation of data about loan applications that had been approved by local SBA-backed banks. “However, the lender’s approval does not reflect a determination by SBA that the borrower is eligible for a PPP loan or entitled to loan forgiveness,” the SBA said. “Because a borrower is listed in the data as having a PPP loan does not mean that SBA has determined that the borrower complied with program rules or is eligible to receive a PPP loan and loan forgiveness.”

And not all the information the SBA released may be completely up-to-date.

For instance, Elm Hill Manor, an assisted living home in Vernon, was listed among the companies approved for a $5 million to $10 million loan. It was, but Elm Hill manager Lisa Cortese said her bank made a mistake, the home sought only $50,000 and was eventually approved for a PPP loan in that, much smaller, amount.

She also said her company was in dire need of the federal help, especially when it was forced to fight for personal protective equipment for its staff. “We did what we had to do,” Cortese said.

The PPP program was initially established by the CARES Act and initially funded at $349 billion. After those funds quickly ran out, the federal government replenished the program with an additional $310 billion.

The program has about $130 billion remaining and Congress has extended the application deadline to Aug. 8.

This story was corrected on July 9 due to an error in the federal data released by the Small Business Administration. Caffeine Inc was incorrectly listed as having been approved for a loan of $5-10 million. In fact, it received a PPP loan of $208,600.