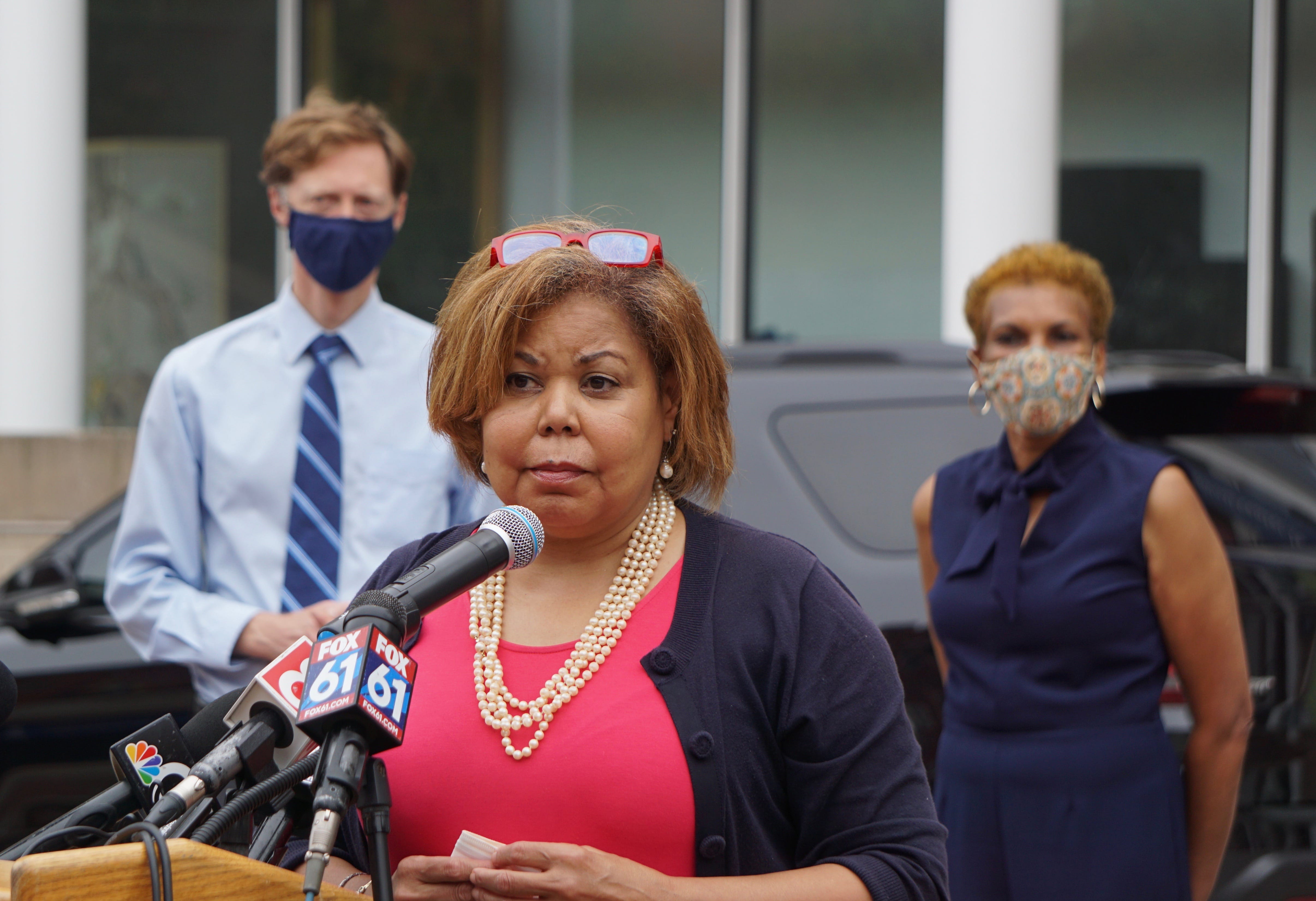 Cathy Graves, the deputy director of economic development in New Haven, with Mayor Justin Elicker and Kim Hawkins of HEDCO.

The unveiling of the new loan program Tuesday comes a day after the Trump administration released the details about the recipients of the $521 billion allocated through the Paycheck Protection Program, including multi-million-dollar beneficiaries in Connecticut.

“Left behind were the smallest of businesses who maybe didn’t have all of their expenses in QuickBooks or their last tax return or even a relationship with a bank or financial institution to help them,” said Lt. Gov. Susan Bysiewicz, chair of the Governor’s Council on Women and Girls.

The new revolving-loan program is funded by The Community Foundation for Greater New Haven, the city of New Haven, The Amour Propre Fund and HEDCO, Inc., a non-profit based in Hartford that also will administer the loans and provide technical support to borrowers.

“This is truly a partnership,” said Cathy Graves, the deputy director of economic development for New Haven. “Municipalities can’t do it alone, and the private sector can’t do it alone. We are all in this together.” 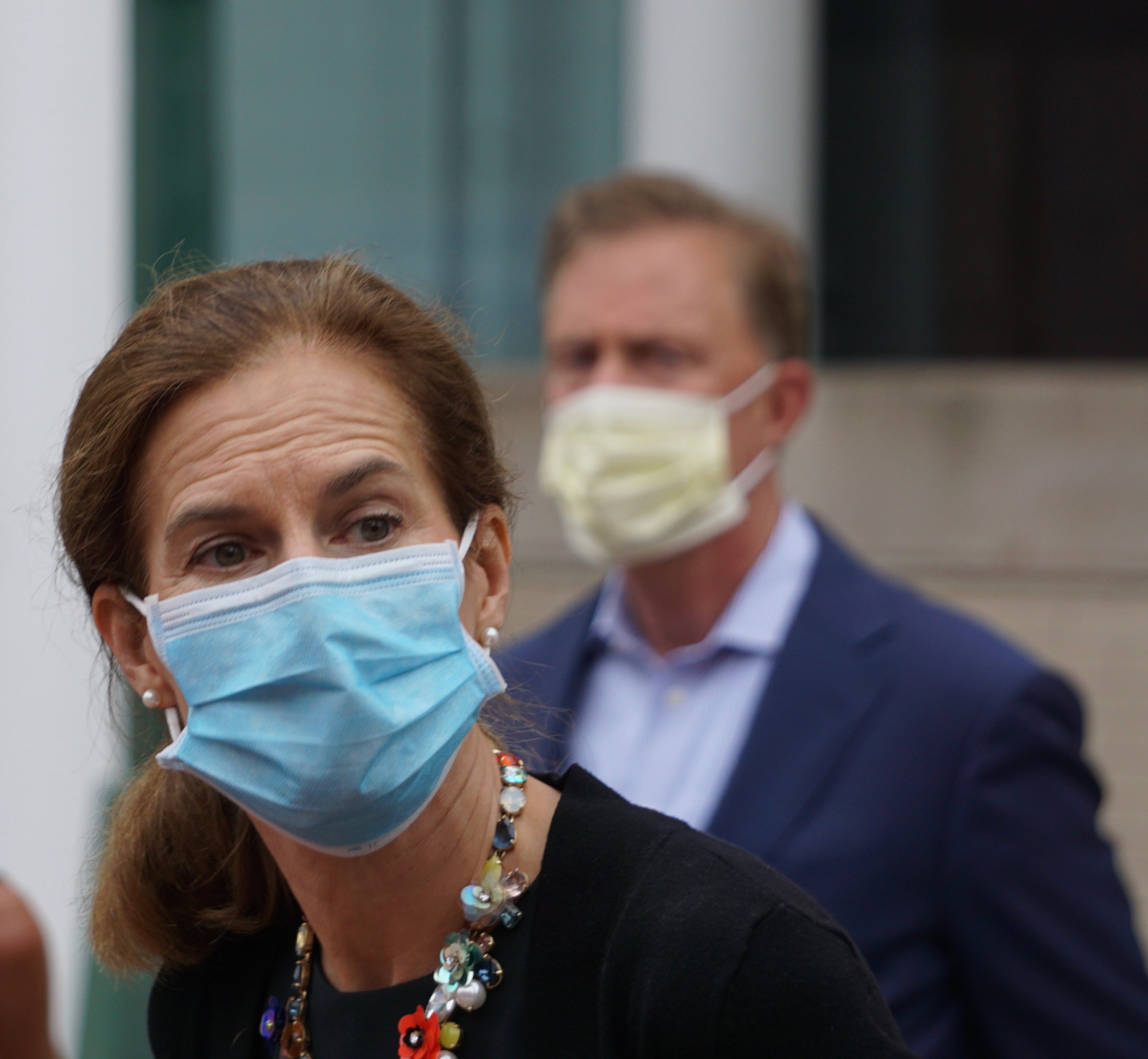 Lt. Gov. Susan Bysiewicz says small businesses were left behind by the PPP.

Low-interest loans of between $10,000 and $25,000 will be available to for-profit businesses that are controlled by women or minorities and employ no more than 20 workers in New Haven or the lower Naugatuck Valley.  The Paycheck Protection Program was open to businesses that employ up to 500.

The loans come with a 4% interest rate, with no application fees and payments due on the principal for the first 12 months. Loans to New Haven businesses that are in good standing after the first year are eligible for forgiveness of up to 16.67% of the original loan amount.

Will Ginsberg, the president of the community foundation, conceded that $1.5 million is modest when measured against “the vast scheme of an economy, a national economy and all the economic damage we’ve seen from COVID-19.”

But small loans can ripple though a community, touching perhaps 75 businesses that collectively employee 1,000 and serve others.

“In terms of the life of this community and the neighborhood in our community and region, we think it can make a big difference,” Ginsberg said.

One of the first studies of the economic impact of COVID was based on an analysis of the Bureau of Economic Analysis’ current population survey by Robert W. Fairlie, an economist at the University of California at Santa Cruz and published by the National Bureau of Economic Research. It measured the losses from February through April.

Kim Hawkins, the chief operating officer of HEDCO, said the Paycheck Protection Program did little for minority-owned small businesses. Only 12% of Black and Latino business owners reported receiving the amounts they sought, a survey by the Global Strategy Group found, and many others lacked the resources to apply.

“The pandemic has seen the American dream interrupted. It is predicted that up to 40% of minority- and women-owned businesses will not survive the losses,” said Lindy Lee Gold, president of The Amour Propre Fund.

Gov. Ned Lamont attended the announcement, which was held on the street outside the The Community Foundation Building. He noted that a $25 million statewide loan program offered by the state in March was quickly overwhelmed.

The state offered interest-free loans calculated to cover three months of expenses for applicants, capped at $75,000. The loans can run for as long as 18 months on the assumption that revenues will return by then, or repayments will be covered by the federal stimulus money. The loans were limited to businesses with no more than 100 employees.

Lamont remained skeptical Tuesday on the question of whether the state can tap its bonding authority to provide more aid to minority businesses, as some Democratic lawmakers are pushing for consideration during a special session expected later this month.

“We want to do great things, but we’ve got to do it responsibly. The legislature in their wisdom put in place a bonding cap a few years ago. That bonding cap is tied to revenues. Our revenues are down,” Lamont said. He added, “There may be a lot of will, but there’s not a lot of wallet.”