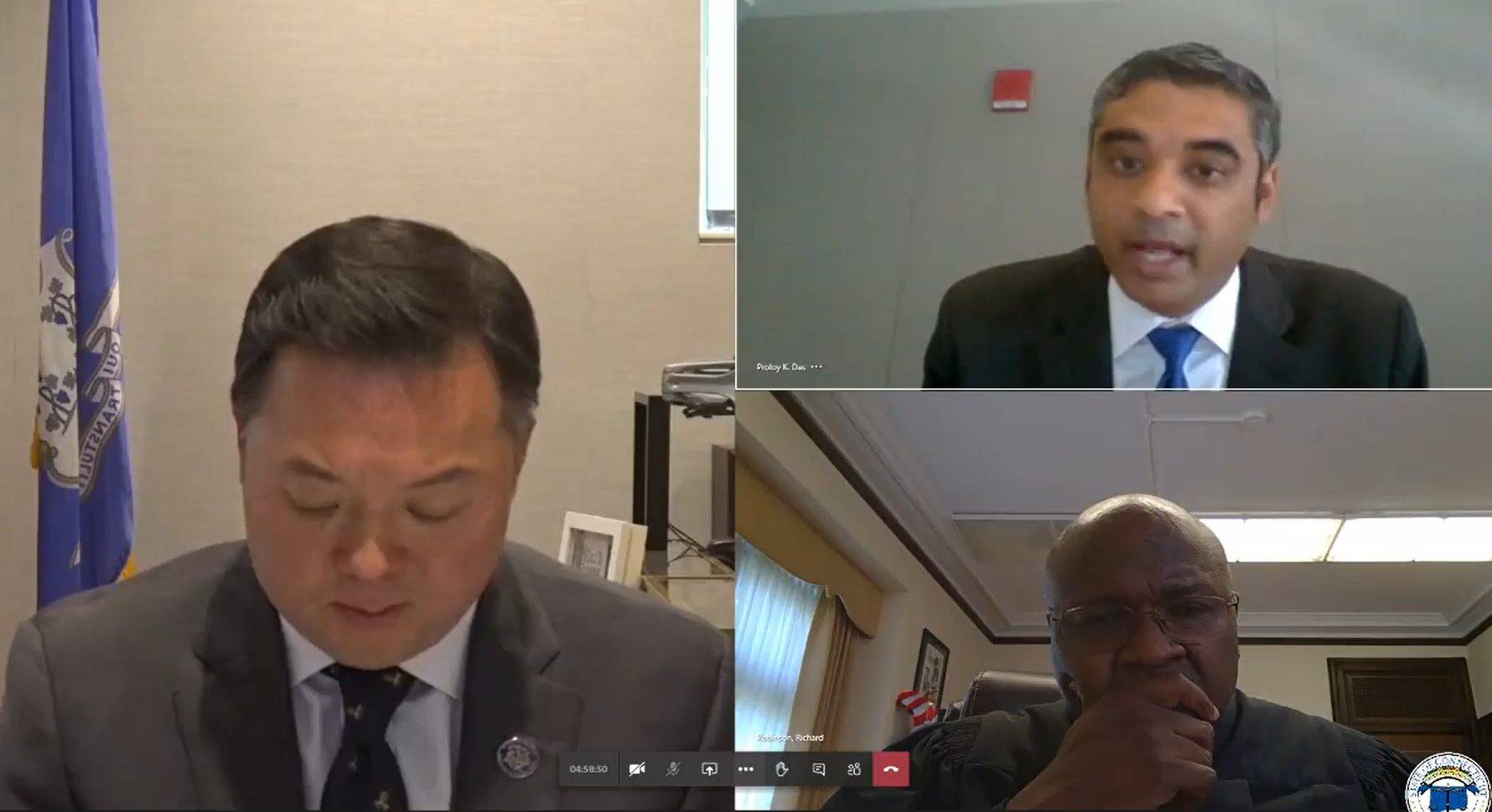 But the legal fights over expansion of voting by mail continues.

In dismissing the case, Robinson agreed with the state officials that the Supreme Court did not have jurisdiction over the issue.

“The Supreme Court … is not a proper vehicle to challenge the ruling of an election official with respect to a primary, including one for federal congressional office,” Robinson said.

The lawsuit centered on Secretary of the State Denise Merrill’s expansion of who can vote by absentee ballot in the August 11 primary to include anyone with a pre-existing condition or who has been in contact anyone with COVID-19. First responders and people caring for someone at higher risk for the virus were also included in the expanded list of those who can vote by absentee ballot.

The state has mailed out about 1.2 million absentee ballot applications and received about 200,000 responses.

The legal challenge to the state’s plan was brought by four Republicans running for the chance to unseat Reps. John Larson, D-1st District, and Joe Courtney, D-2nd District, in the August 11 primary. They are Mary Fay and James Griffin, who are competing to run against Larson; and Justin Anderson and Thomas Gilmer, who are competing to run against Courtney.

Although Robinson ruled against them, the plaintiffs’s attorney, Proloy Das, responded by filing a  new lawsuit in Superior Court late Monday.

“The court’s decision today did not address whether the Secretary of the State and the governor violated the Connecticut Constitution when they unilaterally imposed no-excuse absentee voting,” he said.

Connecticut Attorney General William Tong sought a dismissal of the case in a hearing conducted by teleconference Monday afternoon. He said that in allowing Connecticut residents to vote by mail because of concerns about COVID-19, Merrill was complying with an executive order issued by Gov. Ned Lamont in May.

Tong also argued the plaintiffs had not indicated how the broader use of absentee ballots would cause them harm.

“Under our election contest statutory scheme, [the statute] is limited to challenges for federal office with respect to general elections,” Robinson said.

Das unsuccessfully argued that the expanded use of absentee ballots is unconstitutional because the state’s constitution does not allow “no-excuse” absentee voting.

He requested an injunction, for 24 to 48 hours, to stop the mailing of the absentee ballots on Tuesday. But Robinson’s decision means the ballots will be mailed as scheduled and there will be no more hearings or filings in the case.

Besides filing a new lawsuit in Superior Court,  Das and his colleague, attorney Matthew Ciarlegio, filed a suit  Monday evening asking a panel of judges in the Connecticut Supreme Court to reconsider Robinson’s ruling.

“The Constitution permits individuals who are unable to appear at the polls because of illness or disability to vote by absentee ballot. Executive branch officials cannot ignore the Constitution and issue an edict expanding absentee voting to all,” Das said.

And there are other legal challenges brought by Connecticut Republicans to Merrill’s plan to make greater use of absentee ballots in the primary, including a lawsuit in Superior Court brought by State Sen. Eric Berthel of Watertown and State Rep. Jason Perillo of Shelton. The Republicans argue Merrill’s action is both “unlawful and unconstitutional.”

Even as Connecticut voters may have expanded access to absentee ballots, they will also be able to cast a ballot in person at nearly 800 polling places in Connecticut’s 169 cities and towns.

Because of the pandemic, the state has also allowed towns to reduce the number of workers at each polling station or consolidate tasks to facilitate social distancing.

Whether greater use of absentee ballots will be allowed in November’s general election is still up in the air. During a special session that will begin next week, the general assembly is expected to consider legislation that would allow anyone to vote by absentee in November if the pandemic is still a threat.

Opposition to an expansion of mail-in ballots by Connecticut Republicans echoes criticism by others in the GOP elsewhere, including the White House, who say it makes elections vulnerable to fraud.

President Donald Trump told Fox News on Sunday that “mail-in voting is going to rig the election.” There is no evidence absentee ballots are the cause of large-scale voter fraud.