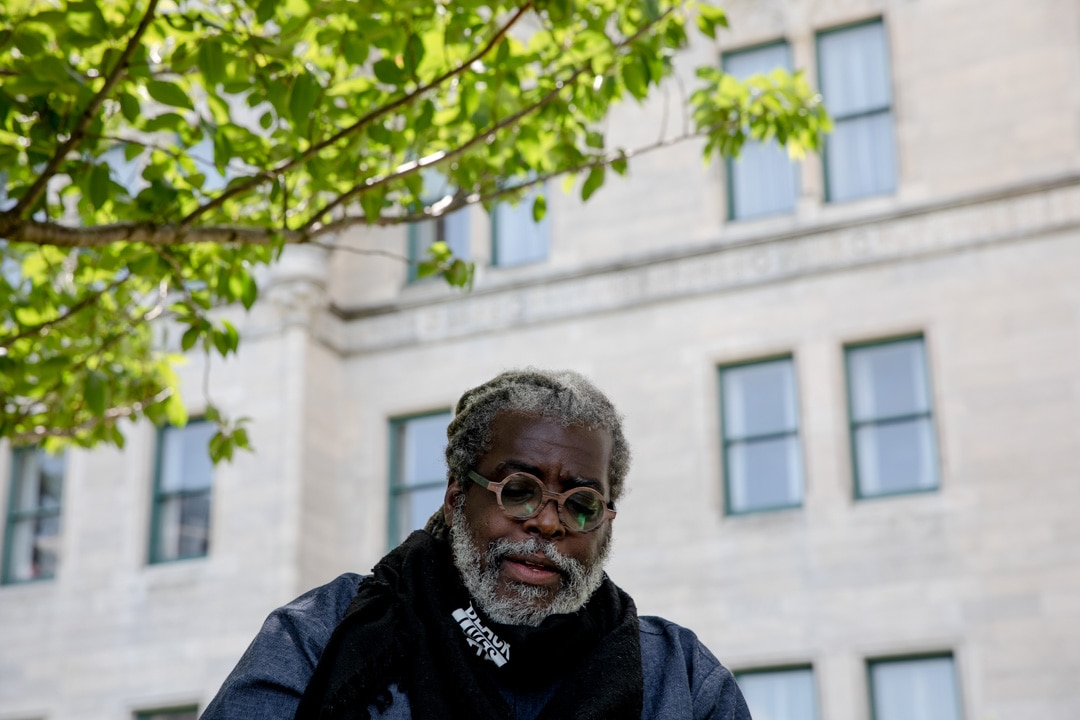 Bishop John Selders prays with protestors on June 15 at the State Capitol in Hartford.

As the police accountability bill is debated in a special legislative session, faith leaders across the state are hoping the work they’ve poured into supporting its passage bears fruit.

As the House of Representatives met on Thursday, the Rev. John Selders, leader of the social justice coalition Moral Monday CT and pastor of Hartford’s Amistad United Church of Christ, spent the day outside the Capitol with other faith leaders to show support for the bill.

This isn’t their first time on the Capitol steps. On June 8, he and 20 faith leaders from the coalition began gathering there to fast and pray publicly, vowing to do so every day  until the governor scheduled the special legislative session to address police accountability. On June 18, it was scheduled for July 23.

Several legislators later told him that this public witness “helped make a difference” in pushing for the session, he said.

“A number of [legislators] gave us mad respect, thanking us for our service,” he said.

Moral Monday CT is part of a statewide push by religious leaders in support legislative reforms in service of the Black Lives Matter movement.

Interfaith groups have ramped up support for the bill as well. Congregations Organized for a New Connecticut (CONECT), an interfaith organization that represents 29 churches, synagogues, mosques, and temples, hosted a Zoom call with 15 legislators in June calling for action on a host of issues related to systemic racism, ranging from police accountability to health inequity.

Phil Kent, co-chairman of CONECT’s Criminal Justice Reform Team and member of Congregation Mishkan Israel in Hamden, said that in recent weeks, CONECT has mobilized nearly 900 congregants to either call or email their representatives in support of the full bill, including doing away with qualified immunity, currently under fierce debate.

Selders said he’s had private and group conversations with lawmakers too, including Winfield and Rep. Robyn Porter, D-New Haven, drawing on relationships he’s built over 20 years of social justice advocacy, to push for the passage of the bill in its entirety, including the elimination of qualified immunity. And he and eight other pastors and ministers submitted public testimony to the Judiciary Committee, all in support of the bill with its full provisions.

“Our power comes from real people telling their real stories in powerful ways to reach the hearts and minds of these legislators,” Kent said.

It’s unfortunate that the police union is making this ‘us versus them’ — it’s right versus wrong.”— Rev. Anthony Bennett

Faith leaders are continuing to advocate within their communities too. Moral Monday CT hosted a Zoom call with the Episcopal Church of Connecticut on July 9 to educate over 100 participants about police accountability and legislative action, Selders said. In the faith community, “people are paying attention and getting involved,” he said.

Rev. Steven Jungkeit said that in his mostly white congregation at the First Congregational Church in Old Lyme, he’s built racial justice work into the weekly Sunday services, including sermons that address white privilege and fragility and Scripture readings on justice, he said. In addition to holding rallies on the church’s lawn, he also encourages congregants to attend Black Lives Matter protests — and in general, to “listen carefully” and “take our leadership from Black voices,” he said.

In addition to supporting the state bill, members of his congregation have become active locally, speaking at selectmen meetings about policing and body cameras and civilian review boards’ subpoena privileges, as well as advocating for the adoption of an active bystandership program to train officers to intervene when colleagues overstep. While it’s been “hard to gauge” the selectmen’s receptivity to their ideas, Jungkeit said, they’re “at the start of a much longer process.”

“It’s gonna take much more than showing up at selectman’s meetings and talking during the public comments to make these changes,” he said.

Rev. Anthony Bennett, lead pastor at Mount Aery Baptist Church in Bridgeport, said that he hopes the legislators recognize their responsibility to do the right thing for their constituencies, especially regarding including the provision to ban qualified immunity.

“It’s unfortunate that the police union is making this ‘us versus them’ — it’s right versus wrong,” he said. 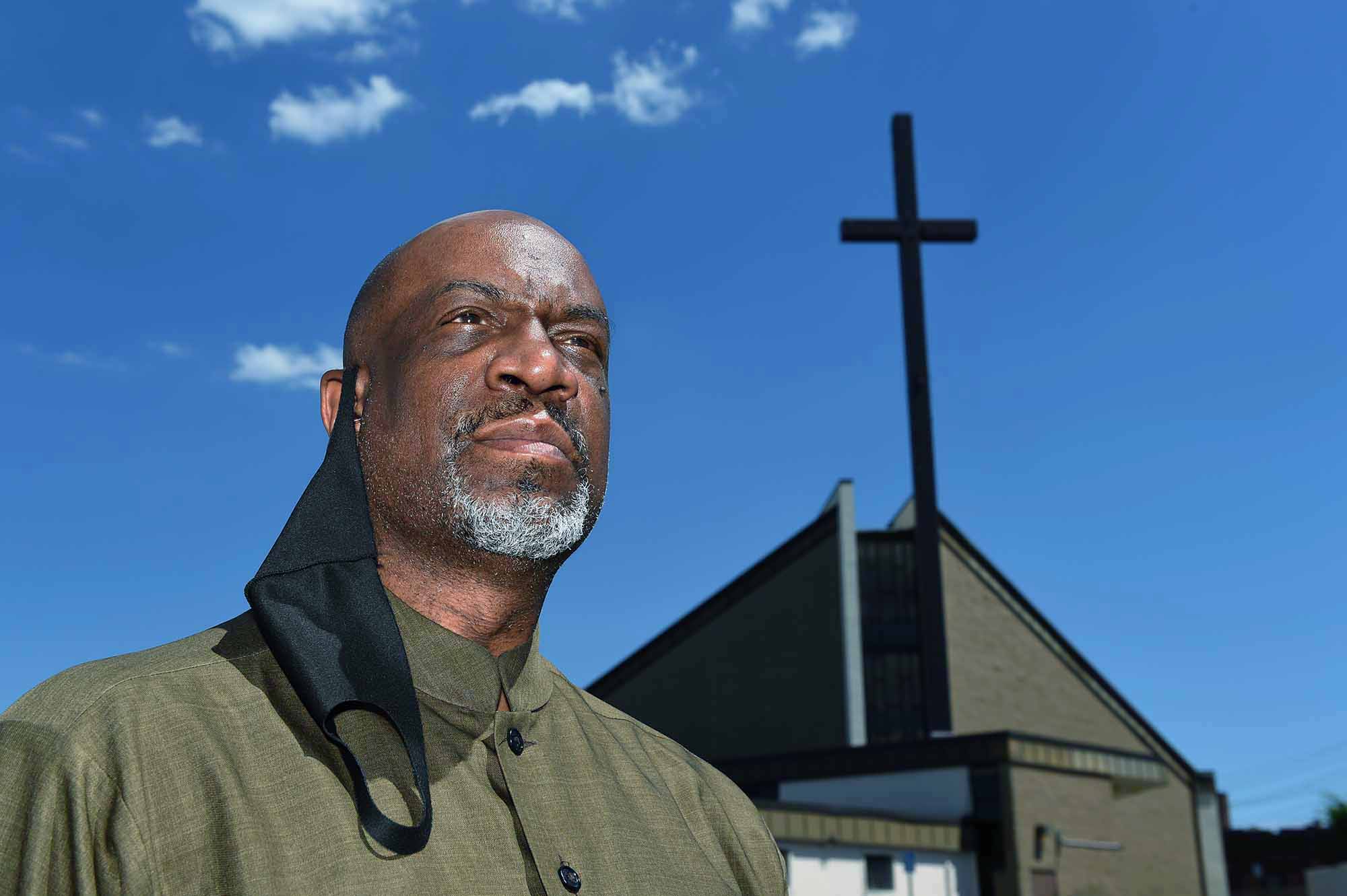 The bill is just one step towards broader changes that the leaders are advocating for. Jungkeit said his church has been pushing for affordable housing in Old Lyme, an issue that didn’t make it onto the legislative session agenda despite being intertwined with racial disparities in the state.

Moral Monday CT has a list of demands, including developing affordable housing, abolishing mass incarceration, and fighting for health equity that it plans to keep pushing, Selders said.

CONECT plans on continuing the push for clean slate legislation that would erase misdemeanors from people’s criminal records after a certain number of years.

“There have been organizations and legislative efforts in the past that have fought to do everything that we’re striving to do now,” Bennett said. “I’m hopeful that this will be a tipping point.”