Lawmakers will debate two health care bills today. Here’s what they would do. 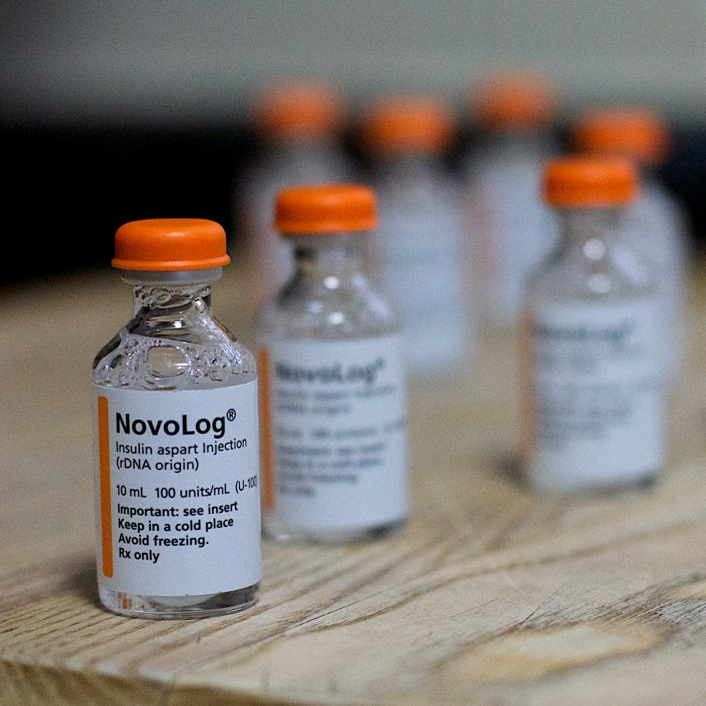 A measure imposing a $25 cap on a 30-day supply of insulin is one of two health proposals that will be taken up during a special session beginning Thursday.

Legislators will convene a special session Thursday to tackle sweeping police reforms and changes that would make it easier for Connecticut residents to vote by absentee ballot in the August presidential primary and November election.

Also on the agenda are two health bills that aim to control the cost of diabetes drugs and boost access to telemedicine services – measures that haven’t received as much attention but could have broad implications for people in need of those resources.

One of the bills would cap the monthly cost of insulin and other drugs used to control diabetes. The other would etch into law – at least temporarily – a loosening of restrictions around telehealth appointments that have become popular amid the coronavirus pandemic.

Lawmakers decided against taking on larger health equity proposals during the session that is expected to last one day for each chamber. But they said the two bills are a good first step.

“We can’t just pass two bills and say we’ve solved the health crisis,” said Rep. Sean Scanlon, a Guilford Democrat who is a key backer of the legislation. “There’s so much more we have to do, but this is a good start.”

The House of Representatives will debate and vote on the measures Thursday. The Senate is scheduled to meet on Tuesday.

Here’s a look at the health bills: 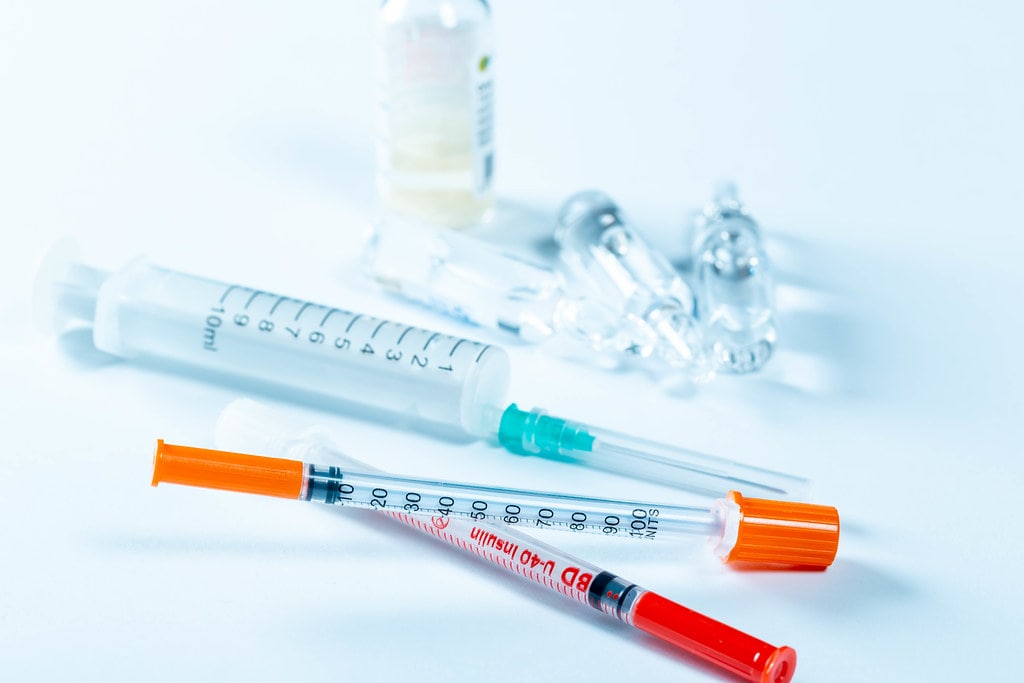 The cost of insulin has skyrocketed in recent years, making the life-saving drug inaccessible to many diabetics.

What does the insulin bill do?

The bill would cap 30-day supplies of insulin at $25 for people who have coverage through state-regulated insurance plans. A previous version of the bill – raised last winter – would have limited the monthly cost to $50, but other states have since passed a $25 cap, inspiring legislators to consider stronger price controls. The cost of insulin-related supplies, such as syringes, pumps and blood sugar meters, would be capped at $100 a month under the legislation.

Other glucose-lowering medications used to treat diabetes would be capped at $25 per month.

The bill also includes a provision giving pharmacists the authority to dispense insulin without a prescription in emergency situations. That initiative was modeled after an Ohio effort known as Kevin’s Law, which allows pharmacists to give patients a 30-day supply of a lifesaving drug like insulin even if the prescription has expired.

In addition, the measure would create an income-based program for people unable to afford insulin, similar to legislation adopted in Minnesota. 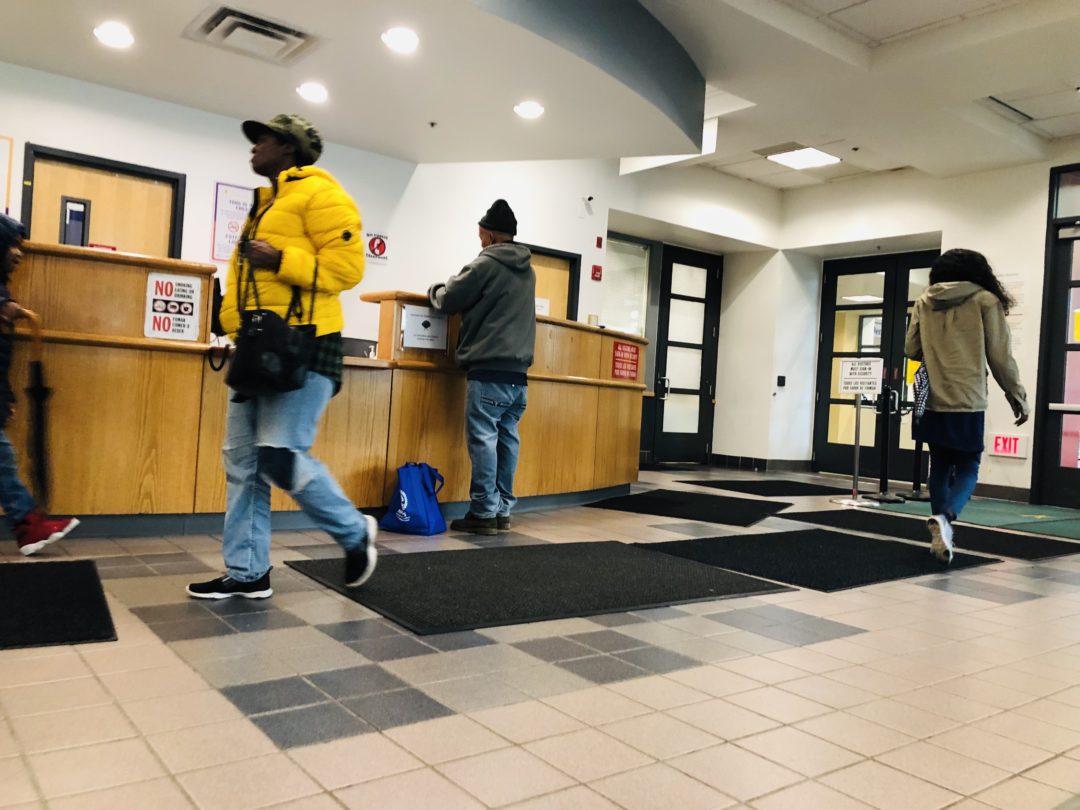 Patients and workers walk through the lobby at Community Health Services, a federally qualified health center in Hartford’s North End.

What about people who are uninsured?

The previous version of the bill would have created a state assistance program for uninsured residents, but that initiative did not make it into the revised legislation.

The new version would establish a working group to study whether the state’s social services commissioner should launch a program assisting people with diabetes by referring them to federally qualified health centers, where they could take advantage of discounted drugs through the federal government’s 340b initiative.

The 340b program allows qualifying patients and providers, such as federally qualified health centers, to obtain medications at substantially reduced prices.

During a public hearing on the insulin bill this week, speakers criticized the omission of stronger support for the uninsured.

“The state has the ability – and dare I say, the responsibility – to create a safety net,” said Kristen Whitney Daniels, chapter leader of the Connecticut #Insulin4all group. “I was extremely disappointed to see any reference to the uninsured left out of this bill, especially since 5.4 million Americans are without insurance right now, including 10% of Connecticut residents.”

When would the law take effect? 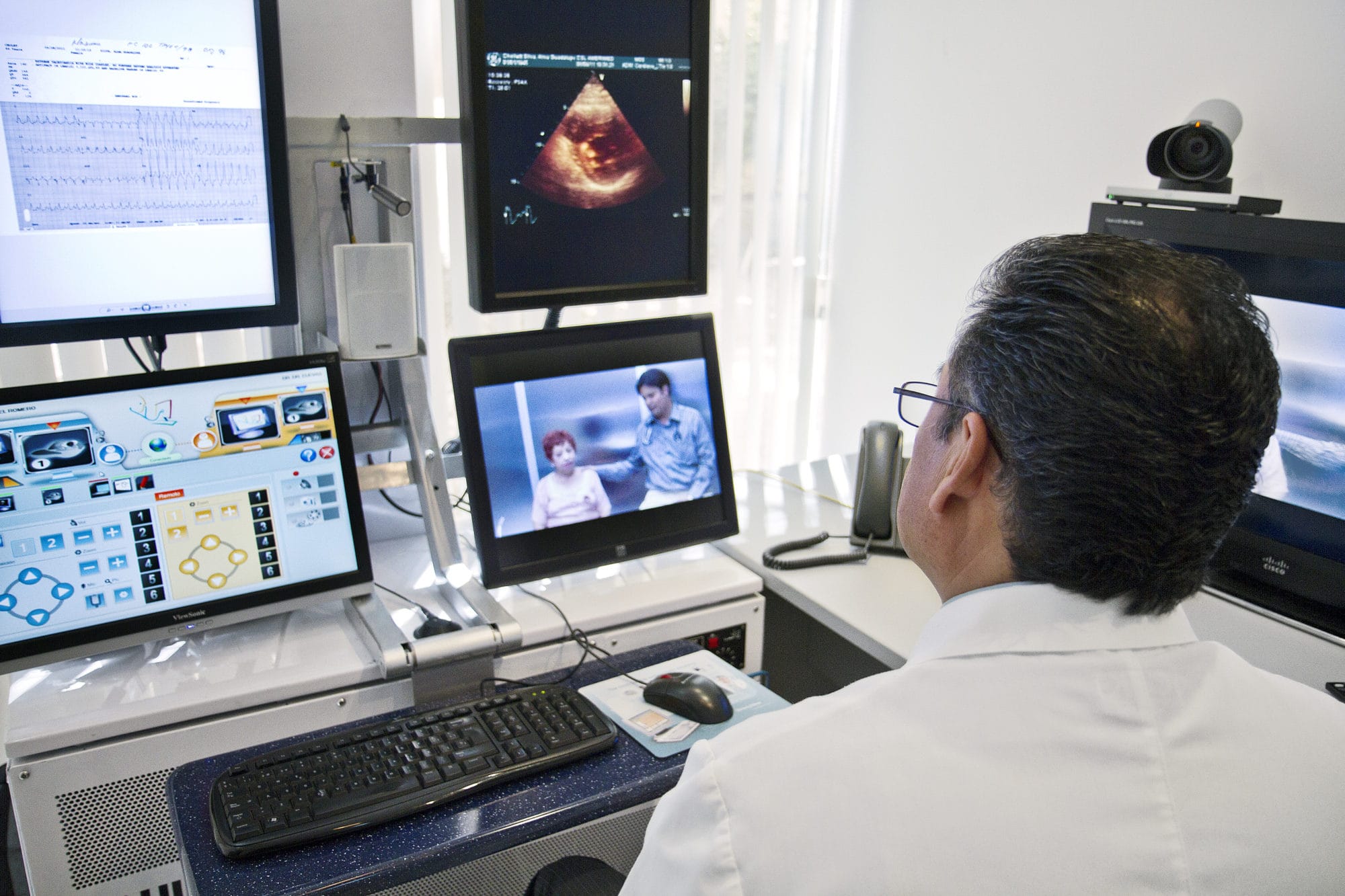 Telehealth appointments have ballooned in popularity amid the pandemic, as doctors’ offices closed or patients fearful of catching COVID-19 stayed away.

What does the telehealth bill do?

Gov. Ned Lamont signed an executive order early in the pandemic relaxing restrictions on telehealth appointments, which became vital as the coronavirus kept patients away from doctors’ offices. His order allows patients and health care providers to communicate over a broader range of platforms, including audio-only phone calls. And under the new mandate, a greater number of health care professionals can conduct the visits, from behavioral therapists to dentists.

But the order is set to expire in September.

The proposed legislation would embed those changes into state law, at least temporarily. It would also ensure payment parity – insurers would have to pay providers the same amount for a telehealth visit as they would for an in-person appointment.

How long will the changes last?

The bill, if passed, would extend the telehealth changes through March 15, 2021. Lawmakers said they were providing an eight-month extension, as opposed to a permanent amendment, so they have time to explore the effectiveness of telemedicine.

“Is telehealth the best way to continue getting health care delivered to people? And is the outcome of a telehealth appointment the same outcome as you get from an in-person appointment? Probably not,” Scanlon said. “But there are things we need to do to make sure everyone has access to good care. I think this all happening too soon for us to know definitively whether we should push this forever.” 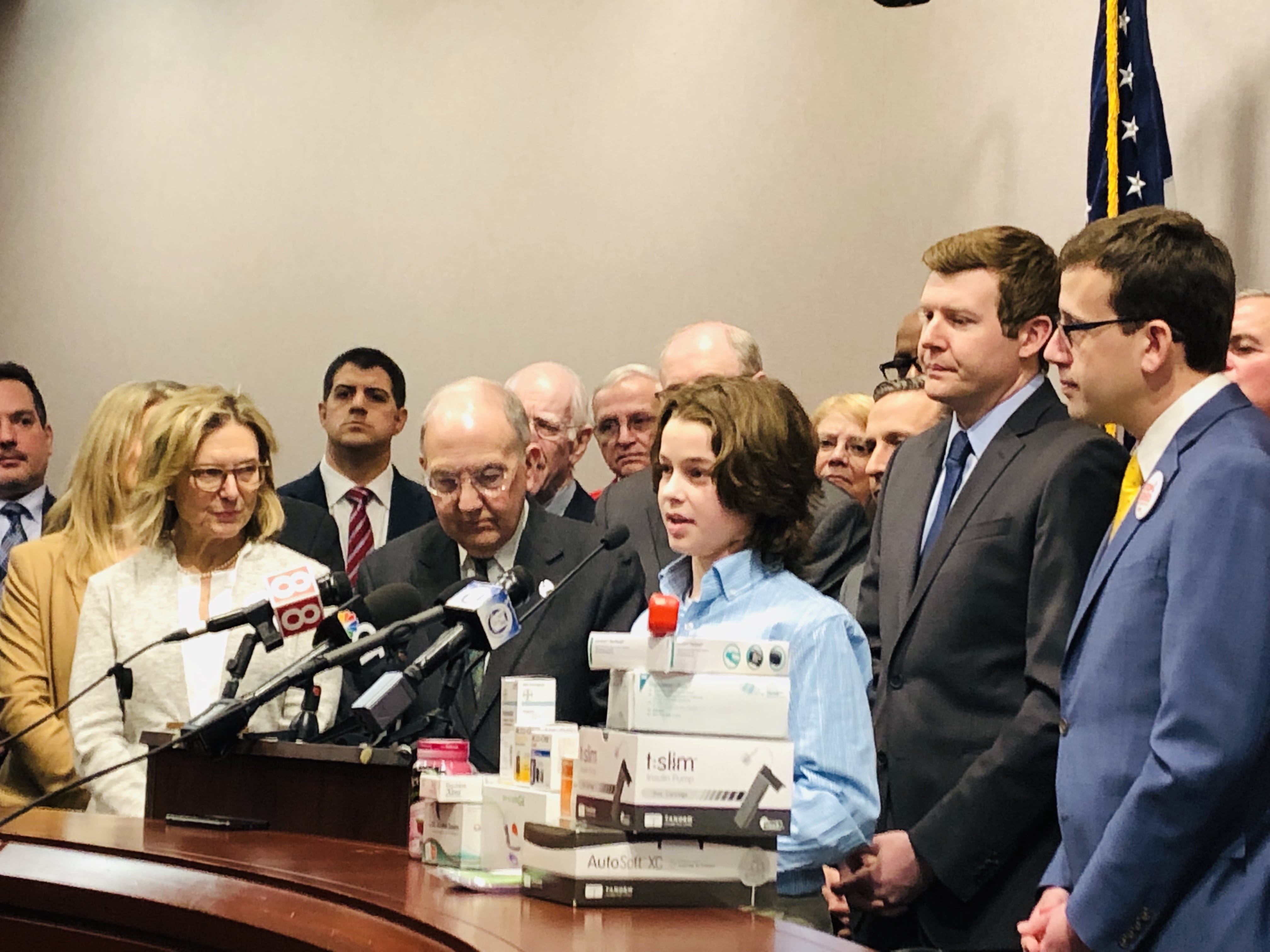 Logan Merwin, 13, center, told legislators and the media in February that he’s long been dependent on insulin and worries about affording the drug when he’s no longer able to remain on his parents’ insurance.

Who supports these proposals?

Both bills have gathered broad support from lawmakers and the public. The majority of residents and advocates who attended a virtual public hearing this week spoke favorably of the measures and urged passage.

One of them was Dan Houdeshell, an Ohio resident whose son, Kevin, died after he could not get access to insulin.

Shortly before New Year’s Day in 2014, Kevin Houdeshell went to pick up an insulin refill, but learned that he needed a new prescription. His doctor’s office was closed for the holiday, and Houdeshell was turned away at the pharmacy.

During the following days, his high blood sugar spiraled into diabetic ketoacidosis. Houdeshell’s body was found in his apartment on Jan. 8, 2014 after he didn’t show up for work.

Kevin’s law was adopted in Ohio in 2016, and 18 other states have passed similar legislation. His father said the change is needed in all 50 states.

“Kevin died at age 36 and except for dealing daily with his diabetes, was in excellent shape and healthy,” Dan Houdeshell said. “He had no idea his organs were shutting down from a lack of insulin that he needed, and he was dying.”

“He was so well liked and respected,” his father said. “We still hear stories about how he helped people or just made them feel comfortable and welcome.”

A few people have been critical of the bills. Susan Halpin, executive director for the Connecticut Association of Health Plans, which lobbies on behalf of insurers, said the insulin bill, while well-intentioned, does not address the underlying cost of the drug.

“It spreads the cost across more people and I can understand the appeal of that,” she said. “But looking long term, we’re afraid that it does more harm than good.”